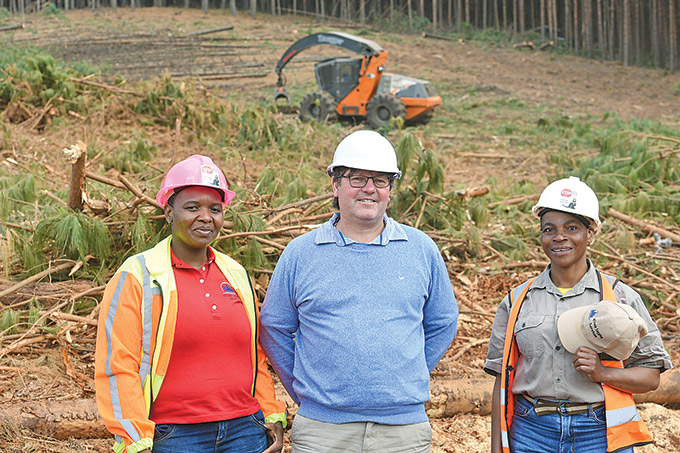 Some of the earliest gold discoveries in South Africa were made in the hills surrounding Barberton in Mpumalanga. This brought about an industrial revolution of its own in the mild climate of the Lowveld. Now Barberton’s gold has all but been depleted, to be replaced by a new and more sustainable resource – timber.

Up in the pine forests of the Montrose area above Barberton, a more subtle and quieter revolution is taking place in the manner and ownership of the once male-dominated industry of timber harvesting and extraction.

Winnie Ndlovu grew up in the forests surrounding the Sappi Ngodwana Paper Mill near Nelspruit. Her father, Frank, worked for the company as a forester and when she was a teenager Winnie accompanied him to work in the forests during her school holidays.

“When I expressed an interest to study forestry after matric, I was told in no uncertain terms that it was not a place for women,” Winnie says. “So instead, I studied agriculture and with my diploma in hand, I joined TSB Sugar for two years to complete my practical training modules.”

Then she worked for a furniture manufacturer for a year before following her ambition by getting a job with timber contract harvester Gavin Simms.

“I worked for Gavin in the administrative department and learnt first hand about the importance of keeping accurate machine and man-hour records plus all the essential regulatory paperwork that ensures a business runs smoothly,” she says. “Gavin seemed comfortable to let me work on my own and I appreciated learning so much about the timber contracting business.”

Seven years later, Gavin decided to exit the timber harvesting business, choosing instead to hire out forest harvesting equipment under the banner of Sable Hire, while also mentoring young and upcoming entrepreneurs to start up their own harvesting outfits.

“In 2015 Gavin approached me and asked whether I had ever considered starting my own contract timber harvesting company,” Winnie explains. “It had long been a dream of mine but without access to finance and such resources, I was doubtful that I could do it successfully. 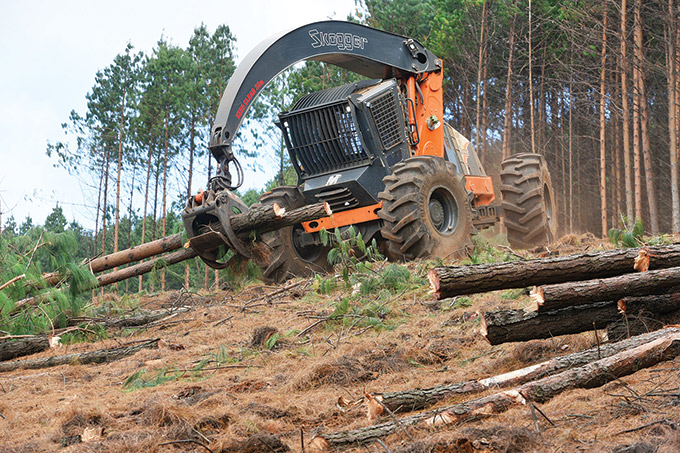 The Skogger bunches felled timber in Mpumalanga and hauls it to roadside for processing.

“Fortunately at that time, Sappi’s Forestry division was putting out tenders for timber harvesting contracts and I was able to negotiate a five-year contract to supply the company with 85 000 tons of pine and Eucalyptus a year.”

That was the start of Winnie’s Logging Services.Winnie started off conservatively, employing 24 people. One of those was Violet Motubatse, who is still the Production Manager .

“Violet and I have been friends since we both worked for Gavin and she has lots of experience in timber harvesting and extraction,” Winnie adds. “We started off with 11 chainsaws, felling timber manually, and the first machine we hired in was a Bell 225A Logger from Gavin’s Sable Hire, which we used for stacking timber at roadside. All other operations were done manually and we soon realised that to make a dent in our massive annual target of 85 000 tons we would have to mechanise to some extent.”

Fortunately help was at hand as besides the valuable mentorship role that Gavin Simms was providing in terms of contracting and technical matters, his company Sable Hire was well equipped to assist Winnie with forestry equipment at competitive rates.

“Gavin has been so much more than a mentor to us as a young company, helping us to obtain favourable financial terms from banks with which we could buy our vehicles to transport our staff and light utility vehicles for both Violet and I,” Winnie says. “His vast knowledge, built up over of many years in the forest of how to work efficiently and safely, is the stuff that no one could get from books alone. 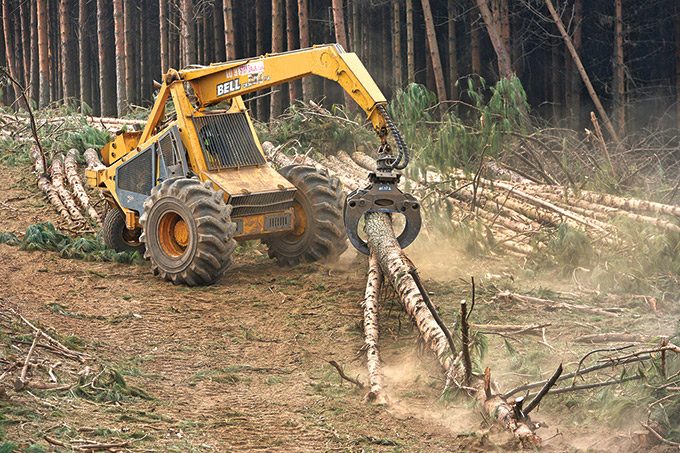 Choosing the right equipment
“Gavin has the experience to know what equipment will work best for us. He owns the first Matriarch Skogger and has just bought a second machine, which we have the privilege of hiring from him. Working in unison with the Matriarch Skogger is the Matriarch FASTfell timber felling machine which has speeded up our production to levels we’d never have believed possible.”

A recent visit by Derek Howe, Bell Equipment’s General Manager: Forestry, Sugar and Agricultural Sales, and Ashley Bell of Matriarch Equipment, has proved valuable for Winnie’s Logging Services team.
“Derek with all his experience is a wonderful teacher and he taught us in the pine compartment how to really approach clear felling efficiently,” Winnie continues. “He showed the Matriarch FASTfell operator how to cut a swathe into the compartment with directional felling, so clearing a way that allows the Matriarch Skogger to bunch timber and extract it quickly, stacking it at roadside from where it can be processed further.”

Working in tandem, the two Matriarch machines are playing a big role in Winnie’s Logging Services currently achieving around 320 tons per day. Winnie and Violet are confident that as their operators improve, this figure will increase.

Sable Hire’s Matriarch equipment is hired out on dry rates and Winnie has been impressed by the low fuel consumption that the equipment returns. The Matriarch FASTfell machine purrs its way through 5 to 7 litres of diesel an hour with the Matriarch Skogger only slightly more at between 6 and 9 litres.
The big decision for Winnie now is whether she should purchase her own equipment, or continue to hire it through Sable Hire.