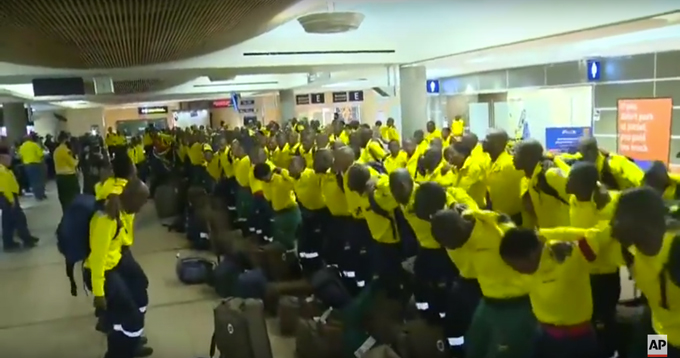 On Sunday 29 May, 281 firefighters from Working On Fire (WOF) arrived in Canada to help battle a raging wildfire in Fort McMurray in northern Alberta. In true African spirit, the first thing the firefighters did after there 16 000 km journey was burst into song...

The traditional war songs help build courage and enable the firefighters to bond, since they are from many different teams around SA. Videos of WOF's arrival have since gone viral as they spread the message of hope and solidarity to Canadians in a time of crisis.

The the Canadian Interagency Forest Fire Centre (CIFFC) requested assistance from WOF (and other organisations) when the Canadian province had exceeded their internal firefighting capacity.

At its height in May, the fire spanned more than 500,000 hectares. There are 2,360 firefighters and support staff, 96 helicopters and 279 pieces of heavy equipment battling the blaze. On Tuesday, officials said 40% of Fort McMurray's perimeter was under control. On Wednesday, residents began returning home with tears in their eyes as they witnessed first-hand the damage caused by wildfires. The fires destroyed the 10% of the city – 2,400 structures.