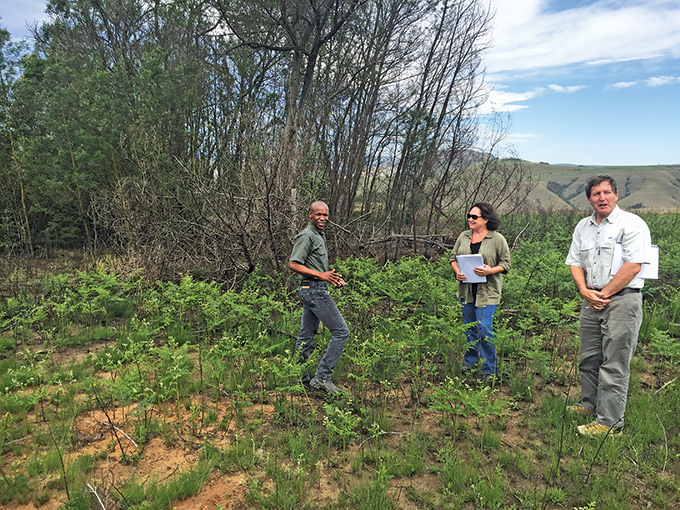 Dave Everard of Sappi (right), Felicity Weir of SGS and Patrick Belebese (Mondi) during the field testing in the KZN midlands.

SDGSA is delighted to share with you Version 3.0 of the South African National Forest Stewardship Standard (NFSS). This will be the last opportunity to comment prior to submission to the FSC for approval. Closing date for stakeholder comment is 30th January, 2017.

Please focus your attention on the draft indicators, context statements and guidance notes as these are specific to the SA NFSS. The FSC Principles and Criteria apply globally and cannot be altered at a country level. As you will see in the attached spreadsheet, each Principle has a separate tab as do the Annexes.  Written comments can be submitted directly in the excel spreadsheet, using column J, or in an email or word document. If you would like to submit your comments verbally or discuss any aspect of the draft standard, you are welcome to contact your Chamber Representatives – see bottom of this post for contact details.

To recap on the process followed during the development of the SA standard: Draft 1 NFSS was released in January 2016 and underwent extensive consultation, leading to a second draft. Draft 2 was then field tested, leading to this third draft.

Field testing
Two field tests took place in October, one by SABS Woodmark in the Piet Retief area, the other by SGS in the KZN midlands. Field testing took place in two large grower and one medium (SLIMF) grower contexts. Two members of the SDG accompanied the auditors to provide guidance.

The main task for the auditors was to test the auditability of the standard and provide recommendations for changes where necessary. There was a general acceptance of the risk-based approach by the auditors and plantation managers. In addition to the auditability assessment, particular attention was paid to indicators under Criterion 6.7 on protection of natural watercourses, water bodies and riparian zones in the KZN midlands field test.

There remain a number of issues in dispute around the legislative requirements and practicality of implementing wetland delineation. The SDG anticipates some robust cross-chamber debates on this before the standard is finalised.

Last round of consultation and submission
Field test insights and recommendations were used to further revise the draft National standard. The resulting Draft 3.0 has now been released for the second and final round of public consultation. The deadline for submission of comments will be 30 January 2017.  The final draft standard will be submitted to FSC PSU for approval early next year, after incorporation of feedback from stakeholders.

SDG-SA would like to thank SABS Woodmark and SGS South Africa for conducting field testing at their own expense, and Sappi, Mondi and TWK for hosting the field test teams.

SDG-SA would also like to thank everyone who participated in NFSS consultation workshops and to all who provided written feedback. A report on how stakeholder inputs were incorporated into the V2.0 is available from the SDG Coordinator on request.