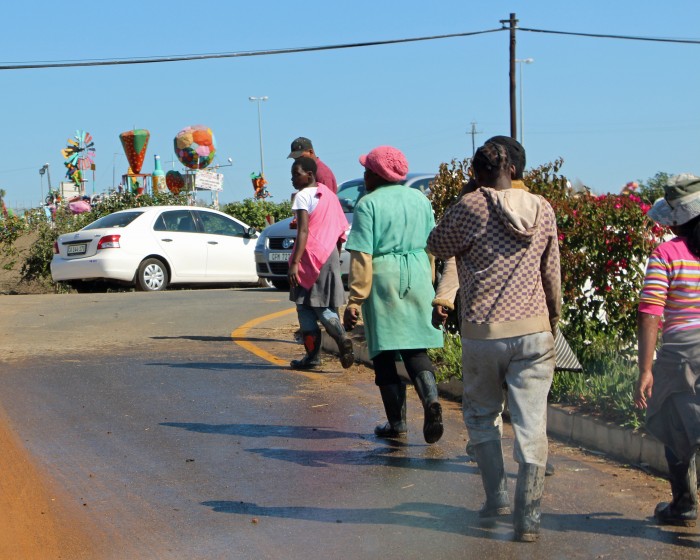 The recent devastating strikes amongst farm workers in the Western Cape has once again drawn attention to the critical importance of maintaining good labour relations and fair employment conditions.

Some farmers and business owners have come forward to tell their stories, and to show that not all is doom and gloom out there. There are a number of celebrated cases of wine and fruit farms co-owned by workers, and others where farm and pack-house workers are paid well above the minimum wage and receive a range of employment benefits including good quality housing, educational assistance for their children, pensions and medical aid. Recently, the media covered a story[1] of a local furniture manufacturer who, after a wild-cat strike, sat down with his workers and negotiated a 50%-85% wage increase. He is quoted in the article, written by Natasha Prince, as saying: "I thought, I can't live my lifestyle and here are guys earning 30 percent above the minimum wage, but in debt, with loan sharks on their backs and clothing loans." The turning point for him was understanding and appreciating his workers' circumstances.

In forestry, there are also good news stories to tell and to share. This is the first of two columns focusing on positive stories and trends in labour relations and working conditions in forestry. This column presents case studies drawn from large, medium and small growers who have a direct relationship with their employees. In the next column, I will look at positive trends in the forestry contracting environment.

Overall, large grower companies employ close to 4 700 workers on permanent contracts, 13% of the total large grower labour force. These workers represent a 'labour aristocracy'; the majority work for companies that have active relationships with labour unions and engage in annual collective bargaining. Wages are on average 60% above the sectoral minimum and most have access to a range of employment benefits, including provident funds, subsidised housing and services, educational assistance and subsidised medical care. Of these, Cape Pine has one the of highest overall standards in working conditions and labour relations for its own employees.

Cape Pine leases the State plantations in the Eastern and Western Cape. The company employs 520 wage earners on permanent employment contracts, 28% of their total work force. Contractors and workers on fixed term contracts carry out the balance of work. Although the ratio of own workers to contractors is not fixed, maintaining a core of permanent staff is critical for fire fighting, says Willie Brink, GM Forests. The company has a recognition agreement with majority unions UASA and CEPPWAWU, and engages in annual wage negotiations. The minimum wage for the general worker band in 2012 is R2 169/month, 51% over the sectoral minimum. Employment benefits include a company contribution to pension fund, subsidised housing and services. Although a few other companies pay permanent workers higher wages, Cape Pine stands out because they have the highest proportion of workers earning at this level, and/or do not pay workers on fixed term contracts lower wages. After transfer from SAFCOL, all employees were able to buy shares in the company. The workers trust collectively owned a 9% share in the company. The lock-in period for shareholders recently expired and regrettably, most employees opted to have their shares paid out.

There are an estimated 1 300 medium growers, located on privately-owned farming land in KwaZulu-Natal and Mpumalanga, and a small number in Limpopo, Eastern and Western Cape. There are an estimated 16 343 workers engaged on medium grower plantations (Clarke, 2012). Overall, medium growers make less use of contractors and more use of directly employed permanent, and to a lesser extent, fixed term workers, than do the large growers – estimated 64% in direct employment (Clarke, 2012). Labour practices on farms are highly variable, but a portion of employers are compliant, and go beyond the minimum requirements of the law, as the following case study illustrates.

The Mason's own two farms in the KwaZulu-Natal Midlands, both with timber as the main enterprise. Thirty-nine families are resident on the land, living in scattered traditional-style dwellings. These families have a relationship with the land-owning family that goes back at least three generations. Family members work on the farm as well as keep their own livestock and grow crops. In addition to 990 ha of timber (500 ha gum, 350 ha wattle and 140 ha pine), there are over 300 ha of grasslands, including conservation areas and Eskom servitudes, available for grazing by tenants' cattle. There are benefits to both parties from the arrangement, with the owner benefiting from a stable resident workforce and the tenants from access to employment, crop and grazing land and housing. Although tenants are responsible for building and maintaining their own dwellings, electricity and water supplies have been made available to all the settlements on the two farms. The owner employs 100 permanent workers, all drawn from the tenant communities. Workers have access to a provident fund, funeral scheme and a loan facility. Over 60% of the workers are FAWU members. Negotiations over wages and working conditions take place on an annual basis, or as required when issues and concerns arise.

Available estimates suggest that there are between 22 000 (FSA, 2010) and 31 500 (Genesis, 2005) growers in traditional authority areas. These growers employ local people to work on their plantations. There are no accurate figures available on the number of workers employed by small growers, but the number is estimated to be close to 8 000 (Genesis, 2005). The following case study illustrates that although there is likely to be a lot of variation in labour practices, a portion of growers are responsible employers, and are by and large compliant with the law. Small growers, unlike other employers in the sector, are members of the community from which they draw their labour, and this may be a factor that positively influences labour practices.

Mr Khoza is both a grower and a harvesting contractor. He has been a member of NCT since 2000. Prior to 1996, he worked for Sappi as a supervisor. He has two plantations – one of 4,5 ha and the other 1,6 ha. He got into contracting because his own plantation is not large enough to provide a steady income or year-round work. He does about 8-10 harvesting jobs per month. In most cases, he buys standing timber, but he also works for some growers as a contractor, charging per tonne harvested.

Mr Khoza provides regular, year-round employment for a total of 24 workers: two chainsaw operators, each with an assistant, three drivers (tractor, bakkie and truck), a supervisor, a first aider and 16 general workers. The employees are mainly engaged in harvesting, but also do silviculture work on his own plantation from time to time. The workers are employed on the equivalent of yearly fixed term contracts, although these are based on verbal agreement and are not on paper. General workers are paid above the minimum wage – R75/day. In 2011, they were paid R65/day (minimum wage was R58.95), and he put this up by R10/day in January. The large increase was prompted, he said, by realising just how hard the work is, especially in the heat of Zululand. The other reason for paying higher wages than the going local rate (R50-R60/day) is to attract and retain workers. His chainsaw operators are paid R80/day and his drivers R120. The teams work to task; strippers must strip between 40-55 trees per shift, depending on size and stripability. Each team (chainsaw operator and eight strippers) must therefore harvest, cut and strip 350-540 trees per day. Working hours are from 6am to 2pm, but it takes about 1½ hours to get from their homes to the place of work, and the same time back again. Workers are collected from a central point at 4.30 am, and get back at around 3.30 pm. They work six days a week. Public holidays are usually worked, at normal daily wages. Workers are paid when they are sick, proving they have a doctor's note and only for a maximum of three consecutive days. A year-end bonus is paid in lieu of annual leave, to all workers who worked throughout the year. The bonus is half the normal monthly salary of that worker (equivalent to two weeks paid leave).

Previous columns have highlighted some of the key concerns facing workers in the sector. Despite the trend towards outsourcing of forest work, a small proportion of forestry work is still carried out by workers directly employed by companies and individual growers. Although labour conditions are variable amongst these employers, a portion maintain good labour relations, pay above the sectoral minimum wage, provide employment benefits and keep their unit costs within profitable limits. They are an inspiration to all employers in the sector.

Jeanette has worked for over 25 years in South Africa and the southern African region, with a focus on the developmental role that forestry and forests can play in poverty reduction and livelihood security. Email: forests@mweb.co.za

The national Minimum Wage for farm workers – including forestry workers – has been increased to R18.68 per hour, which

Sappi commits to corporate citizenship in support of SDGs

Sappi Southern Africa has released its 2019 Corporate Citizen Report, which highlights the progress the company has made to ensure