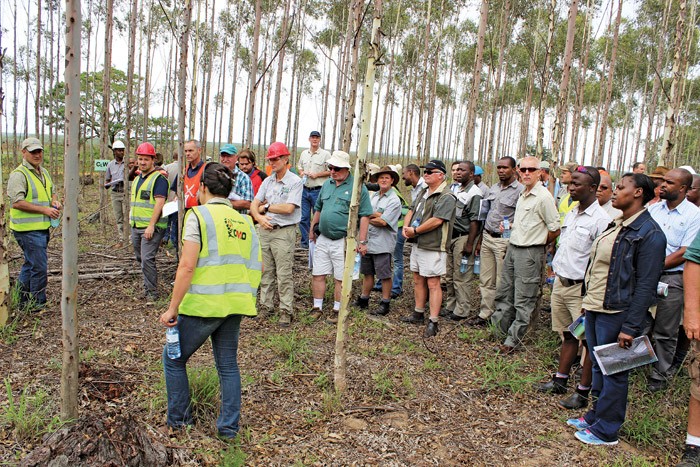 Dianna Rietz discusses the effects of soil compaction after harvesting.

Forestry in the Zululand region came under the spotlight at a recent ICFR field day held at the Town Hall in KwaMbonambi. Of particular interest was the impact of the current drought on forestry in the region, and the excellent growth seen in some of the two-year-old Corymbia hybrid trials in Zululand.

The Zululand coastal plain continues to provide foresters with challenges due to periodic droughts, wildfire and an increase in pests and diseases. Some 20% (76 000ha) of managed Zululand coastal timber production for pulp markets is grown on sites with < 900mm MAP, according to Robin Gardner of ICFR.

In response to the need to find alternative eucalypts suited to these low-productivity, drought-prone sites, ICFR sourced a range of Corymbia material from Queensland and established two site x Corymbia hybrid interaction trials on the coastal plain in 2013.

Robin said that the advantages of Corymbia torelliana (CT) and its hybrids include:
• Greatly improved root strike and potential for clonal forestry;
• Non-susceptibility to Leptocybe invasa and Glycaspis brimblecombei;
• Lowered basic wood density over that of pure C. henryi (CH);
• Increased tolerance to water-logging; drought conditions; heat and cold; resistance to fire damage. (However, Robin warned that CT and its hybrids are not immune to all pests and diseases!)

• Some trees in a few of the imported CT x CH hybrid families are showing symptoms of drought stress at Mfezi, the drier site of the two.
• No drought stress symptoms in the CT provenances, CT x CCV and CT x CCC hybrid families, nor in the South African improved C. henryi material.
• Hybrids between C. torelliana and our locally-improved C. henryi may prove superior to the imported material, and this warrants investigating.

Two new insect pests (Ophelimus maskelii and Spondyliaspis plicatuloides) and a new fungal pathogen (Teratosphaeria destructans) have arrived in SA in the past two years.

Ophelimus maskelii was followed into South Africa with parasitoids, which is good news for foresters.

Teratosphaeria destructans: it has been confirmed in the Zululand area, and reported from KZN Midlands. Izette says it is potentially destructive, but the TPCP team is not sure whether it is capable of the mass defoliation seen in SE Asia.

Gonipterus: the species in SA is not Gonipterus scutellatus, as originally thought. Outbreaks have been increasing in recent years despite the release of a bio-control agent, Anaphes nitens. Another biocontrol is in FABI’s
quarantine facility, awaiting clearance for release.

Glycaspis brimblecombei (Red gum lerp psyllid) – a bio-control agent came into the country on its own, and is being released in affected areas.

Spondyliaspis plicatuloides (aka Skulpie) – has the potential to cause severe damage, TPCP team investigating an opportunity to bring in a bio-control.

Leptocybe invasa – Izette reports that the impact of this insect is diminishing as a result of the introduction of a bio-control. However a new Leptocybe genotype from Asia has been found on E. macarthurii clones in Piet Retief area. There is uncertainty as to whether the bio-control will be effective in controlling this insect.

Drought-induced die-back of a Euc clone
‘Maladaption to extreme drought conditions’ is the verdict of scientists following the recent die-back of a single Eucalyptus clone (GU 178) in Zululand, after 3-5 years of good growth.

Casper Crous of the TPCP reports that an investigation into the incident suggests that the GU 178 clone is ‘maladapted’ to extreme drought conditions, which have prevailed in Zululand over the past three years. Apparently this clone keeps on trying to grow vigorously when it should be shutting down to conserve water due to extremely dry conditions, so it effectively kills itself.

Meanwhile other EU clones established in close proximity to GU 178 are coping with the drought reasonably well. 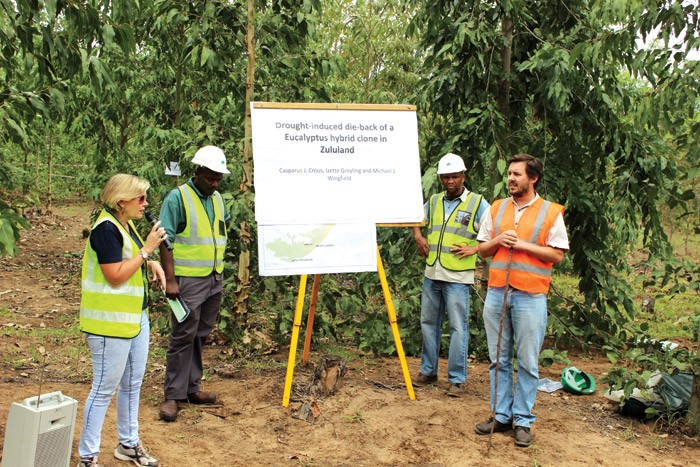 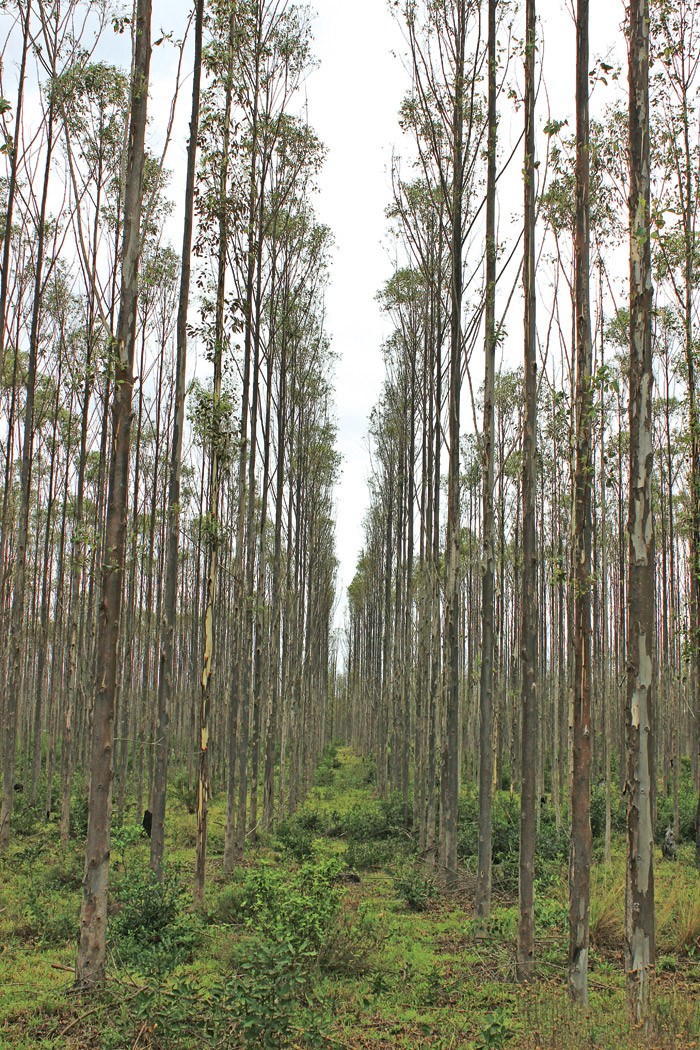 A familiar site in Zululand ... trees ravaged by drought and Leptocybe invasa.

Glyphosate ‘drift’ stunts tree growth
Using glyphosate to control weeds after planting will negatively affect tree growth, due to ‘drift’ of the herbicide onto the growing trees. Foresters have always known this, but it has never been proved. Now it has.

A study by ICFR shows that “at all levels of glyphosate, Eucalyptus growth is significantly stunted, with severe tree damage at the highest rate”.

Louis Titshall reports that the study found no negative effects on growth of trees from the selective herbicides (clopyralid – a systemic broad-lead selective; and quizalofop-p-tefuryl – a systemic grass selective).

Eucalypt yield trends in Zululand
Using routine inventory records, supplied by Mondi and Sappi, a comparison of current crop growth with that of the preceding crop was presented by Andrew Morris of the ICFR.  Based on records from some 400 compartments, the current crop shows an overall 14% drop in productivity compared to the previous crop.  Andrew points out that this is still better than the productivity of the predominantly Eucalyptus grandis crops three rotations ago, but is obviously cause for concern.

The main cause of the current yield trend is a period of below average rainfall which has persisted for nearly 20 years, with an average 10% to 15% less for the first decade of this century.  Rainfall patterns are influenced by many factors such as the approximate 10 year alternating wetter and drier periods known as the Dyer-Tyson cycle, and the well-known El Nino Southern Oscillation that is causing the current extreme drought over southern Africa.  Despite uncertainty about the longer term effects of global warming, Andrew concludes that current conditions likely reflect normal variation and that higher rainfall will return to the region as the natural cycles progress.

Downward growth trends were greatest in the lower rainfall areas north of Mtubatuba where reductions of 35% to 40% were evident.  However, this trend was probably not driven by rainfall patterns alone. The impact of the new insect pests now detected in Zululand may have been exacerbated by drought stress.

Exploring the geology of the region, Andrew explained that the deep Zululand sands which provide excellent water storage to buffer the impact of more normal droughts, are shallower north of Mtubatuba, which would make the consequence of a prolonged drought more severe in this area.

The industry is already responding to insect damage by planting more tolerant clones and this, together with the return of better rains, will see growth return to a positive trend. However Andrew cautions that forest managers need to develop production regimes that are more resilient in the face of fluctuating rainfall patterns.  This will require a better understanding of how pests, pathogens and soil water storage interact to determine the impact of low rainfall periods.

Andrew appealed to the industry to initiate multidisciplinary research to address this important objective for eucalypt plantations in Zululand. 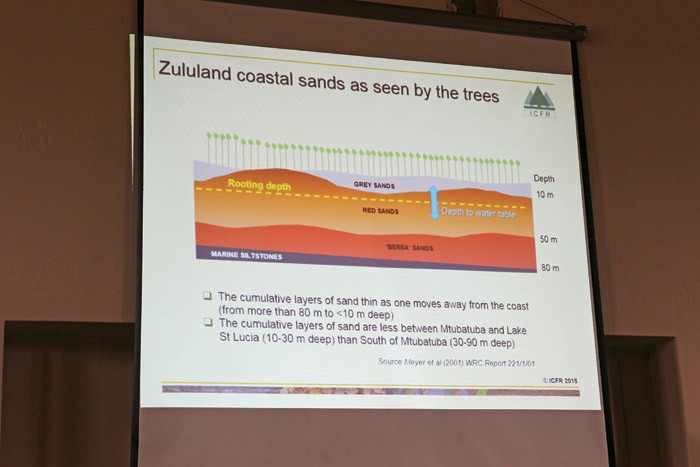 Slides from Andrew Morris's presentation (above and below). 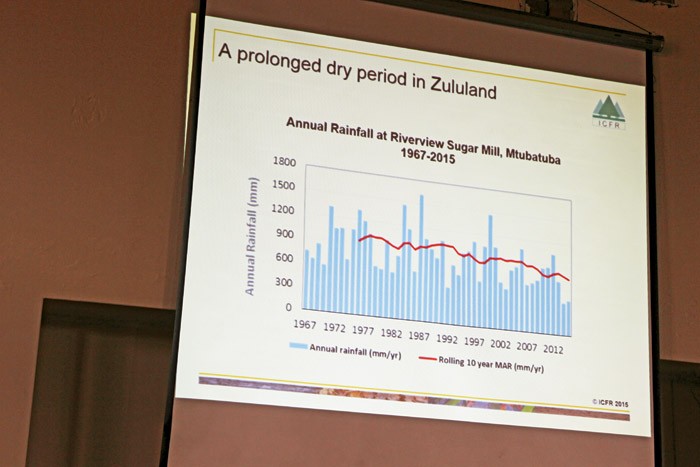 Negative impact of soil compaction
Decreasing soil porosity, soil organic matter and site nutrients are key factors contributing to declining productivity of plantations. Harvesting and site preparation practices that involve machinery are the practices most likely to decrease soil porosity. Residue management and the moving of machinery over the residues are most likely to affect the soil organic matter and soil nutrient content.

The greater the slash load left covering the soil after harvesting, the less impact moving machinery has on soil compaction.
Presentation by Diana Rietz

The importance of weed control
In terms of post-establishment growth (from 14 months to rotation-end) neither tree type (mini-cuttings or seedlings) nor planting density had a significant impact. In contrast, the degree of weed control remained significant through to rotation end with a significant increase in merchantable volume of the row weeding treatments compared to the weedy control treatment.
Presentation by Keith Little

To coppice or not to coppice
In 2002 four levels of harvesting (from manual through semi-mechanised to fully mechanized) were used to fell a stand of E. grandis x E. urophylla to quantify the impact of mechanization at felling. The aim of the trial was to determine the impact of increasing mechanization of harvesting operations on damage to stumps and their subsequent ability to coppice.

Conclusions drawn from the trial:
•Methods of harvesting and extraction had no impact on stump survival, or the number of stems after the final coppice reduction operation.
• Irrespective of the method of harvesting or extraction, there was more damage and less coppice on the upper half of the stump than the lower half; the stumps in the extraction route or immediately adjacent.
•Three main factors that contributed to stump damage were vehicle movement, tear-outs and log stripping.
• There were no significant differences between the four harvesting systems in terms of rotation end volume.
• GU A380 coppices exceptionally well.
Presentation by Simon Ackerman 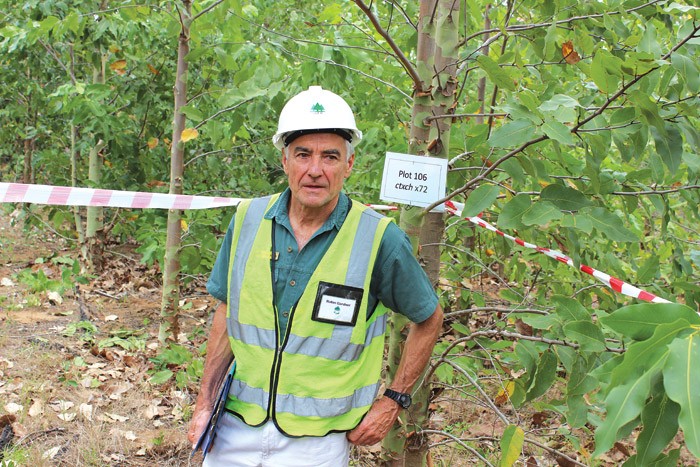 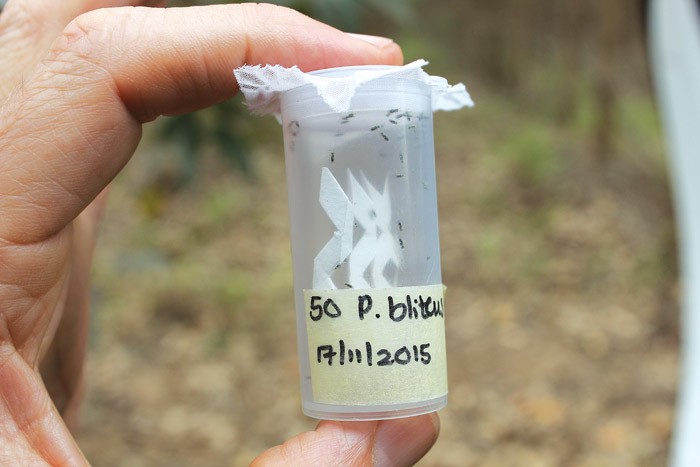 The bio-control for Glycaspis brimblecombei is being released in affected areas.

Mulching of harvest residues is rapidly gaining ground in South African forestry, and is proving to be a game changer