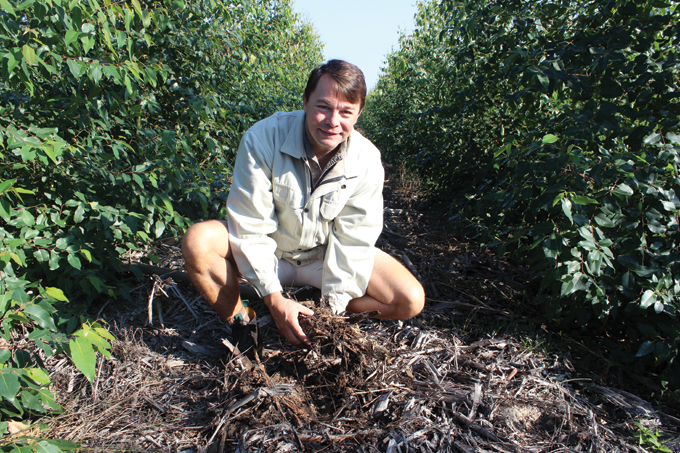 Mulching is one of those operations that most forestry folk you talk to say they would like to do – but it’s too costly. Thus many growers in South Africa have done mulching trials and/or have mulched particular compartments for specific purposes. But until now, it has not been accepted as standard forestry practice. Now Sappi has taken the lead and implemented mulching as a key strategy for their Zululand plantations. This means that all compartments will be mulched after clearfelling. There will be no more burning of slash on Sappi Zululand.

Mulching is a strategy that has been thoroughly researched and trialed by Sappi since 2010. Mulching didn’t suddenly get significantly cheaper – but the many benefits of this approach have been quantified and Sappi management has decided that they can justify the cost.

Sappi’s Zululand forestry team started implementing the strategy in 2014, and according to Area Manager Grewar van Huyssteen and Forestry Manager Jeffrey Le Roux, the benefits are already being felt.

“We started in 2010 trialing different machines, and comparing burning slash vs mulching,” explained Jeffrey. “We recognized multiple benefits from mulching, however the cost was a major deterrent.”

He said that the increase in the minimum wage in 2013 brought about significant pressure to reduce costs and look for productivity improvements. Mulching eliminated stumps from the previous rotations that subsequently hampered any form of mechanization in silviculture. 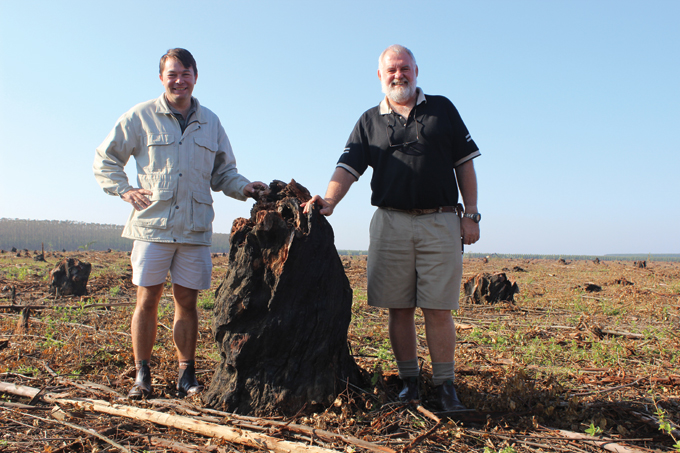 Jeffrey Le Roux and Grewar van Huyssteen with one of the large stumps causing headaches for foresters. Mulching will eliminate these stumps in future.

However the true value in mulching was the impact it had on the ability to reduce the temporary unplanted area (TUP) and potential improvement in MAI due to soil moisture retention, and by retaining valuable nutrients that are lost during brush burning.

He said that the window of opportunity for burning slash in Zululand is very short. “It’s either too wet and you can’t burn, or it’s too dry and it’s too dangerous to burn, causing delays in replanting,” he said.

Furthermore they can only burn when the wind is coming from the south, otherwise the local community groups complain about the smoke.

The drought has exacerbated the situation such that the burning window closed in July last year, and only opened again at the beginning of 2016. This means that those compartments that were clearfelled during that period could not be prepared for re-planting.

Not only are TUP areas not productive, they become a cost burden because the coppice re-growth has to be treated again and again the longer it lies fallow. The drying slash (if it can’t be burnt) is an added fire risk as well.

Now these problems are a thing of the past in Sappi’s Zululand plantations, which cover 20 000 ha (planted) and stretch from Richards Bay to north of Matubatuba.

“Mulching can be done any time,” said Grewar.

As soon as the shorthaul removes the last log from the site, the mulcher moves in and a few hours later the slash and stumps are reduced to a mulch layer that covers and protects the soil from the sun, and the compartment is ready for planting. Thus the land goes straight back into production – moisture and nutrients are retained in the soil and the old stumps are gone!

According to Grewar, TUP area in Zululand had built up due to adverse weather conditions, but the introduction of mulching has seen TUP significantly reduced.

“We are 550 ha ahead of where we would have been if we hadn’t mulched,” commented Grewar.

The compartment above was mulched before planting in August 2015. Note the rich mulch covering the soil and the excepational growth of the trees. The compartment below was planted at the same time, but was burned and not mulched. Note the bare sand exposed to the elements, and the undersized trees planted in blanking operations after high winds and heat took their toll. 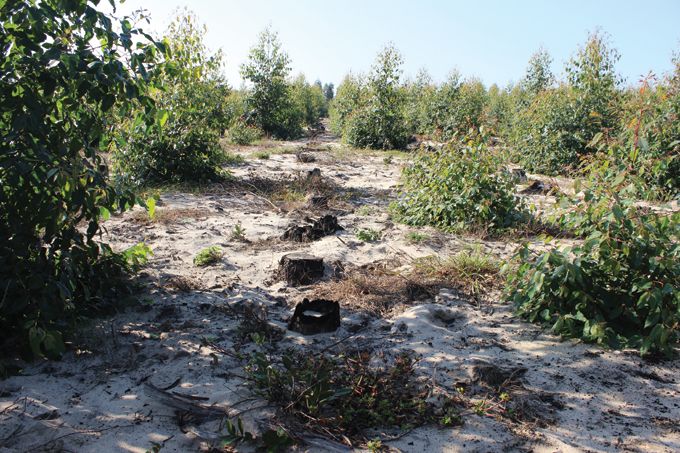 Choice of equipment
One of the issues that arose as a consequence of mulching is that the mulched material builds up in some places making it trickier to mark and plant.

“However we are looking at introducing pitting machines to eliminate this issue, as well as improving planting production and quality,” said Jeffrey.

Sappi’s silviculture and harvesting operations are 70% mechanized, so this fits in with Sappi’s strategy to mechanise where appropriate.

Another issue that has cropped up is that they have found the smaller mulching machines don’t grind the stumps flush to the ground. Some stumps are protruding a few centimetres, enough to damage the side-wall of a tyre, and allow coppice re-growth.

Currently the mulching contractors, Grand Bridge Trading, are using an Ahwi RT400 and RT800, and a Cat mulcher. A Bucket Mouth LSG 900 mulcher, which is drawn by a skidder, has just arrived from Australia and is undergoing trials. A bigger, more powerful Bucket Mouth TSG 1000 mulcher is on order, and will grind the stumps effortlessly right down to the ground, so there will be no leftover stumps showing after the operation.

In fact the TSG 1000 is capable of mulching up to 30 cm into the soil, but Sappi is not considering this option for now. 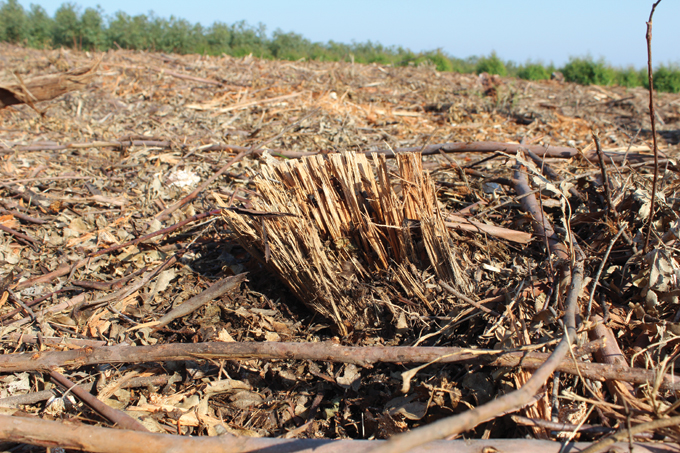 After the mulching operation some stumps are still visible, but they have been shredded and will rot and decompose fairly quickly. 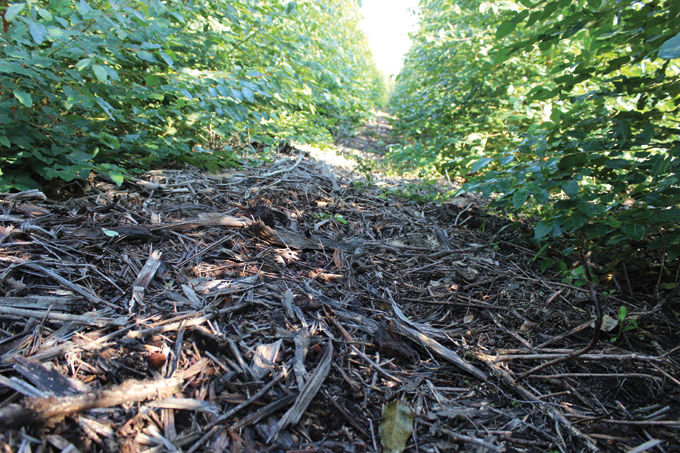 This compartment has been mulched – not burnt. Note the rich, deep mulch layer that retains moisture and nutrients in the soil. This mulch layer does not burn easily. These trees are just nine months old, and have grown through a drought.

Immediate benefits
The benefits of mulching become clearly visible just a few months after planting. Firstly, plant survival is much improved, thanks to the mulch layer that retains moisture in the soil. Consequently all the trees survive and thrive, the stocking is good, the trees grow evenly and canopy closure is achieved sooner. It is expected that this will translate into a bumper harvest.

In November last year searing temperatures and high winds caused havoc in Zululand. Jeffrey reports that in compartments that had not been mulched, the young plants were sand-blasted into oblivion. In the mulched compartments the seedlings survived as the soil was protected by the mulch layer.

Sappi’s General Manager, Forestry for KZN, Leander Jarvel, said mulching was an appropriate solution for the Zululand coastal area as it would protect the nutrient-poor soils, helping to sustain long term productivity. He said removing the big stumps would also pave the way for more effective mechanization.

Summary of mulching benefits:
• Improves long-term soil health. You don’t have to burn slash after harvesting, so the soil does not get scorched.
• Improved survival and early growth of seedlings. The mulch layer protects the soil, retains moisture and nutrients. This translates into significant productivity gains.
• Mulched material breaks down quicker and releases nutrients into the soil.
• Reduces soil compaction – the mulch layer provides a buffer between the tyres/tracks of heavy vehicles and the soil beneath.
• You can use any harvesting/extraction system after mulching because you don’t have to worry about stumps and access.
• It extends the planting season because the mulch protects and nurtures the soil. In Sappi Zululand’s case, it extends the planting season by at least three months, and in wet years you can mulch and plant all year round.
• Reduces TUP areas, because you can mulch immediately after clearfelling, and prepare the soil and plant immediately after mulching.
• No stumps for bees to occupy, which means fewer honey hunters and a reduced fire risk.
• Reduced fire risk due to absence of post-harvest slash. Absence of stumps gives fire fighting vehicles and fuel reduction equipment better access to compartments.
• Absence of old stumps gives foresters more options for choosing pitting and planting methods, as well as weeding and fuel reduction operations. 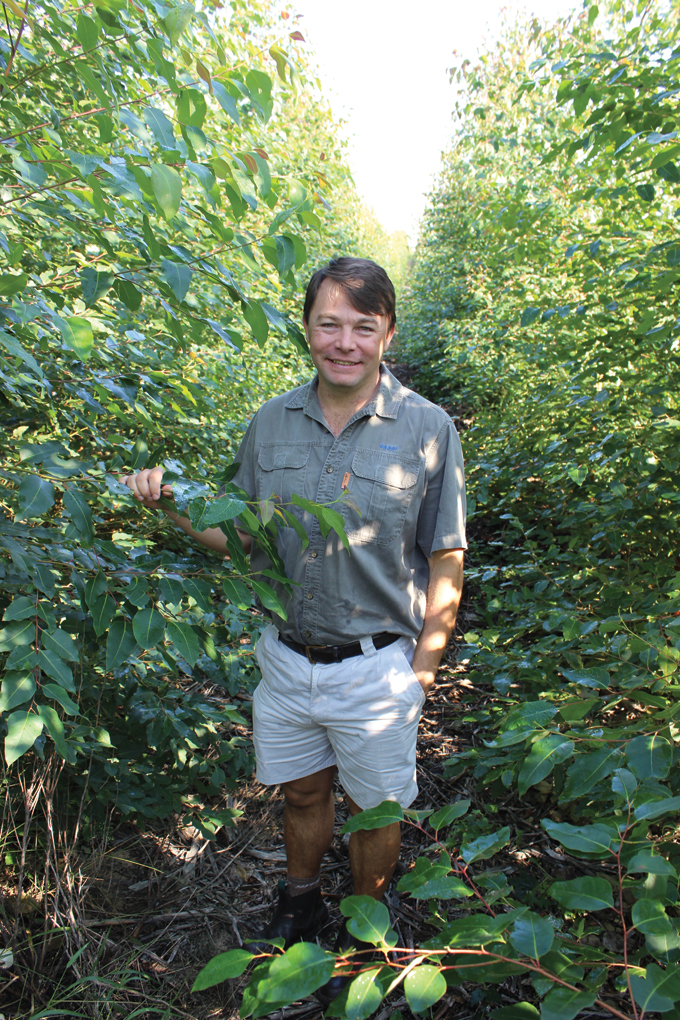 Jeffrey Le Roux is happy with the growth in this mulched compartment, which was planted nine months ago. 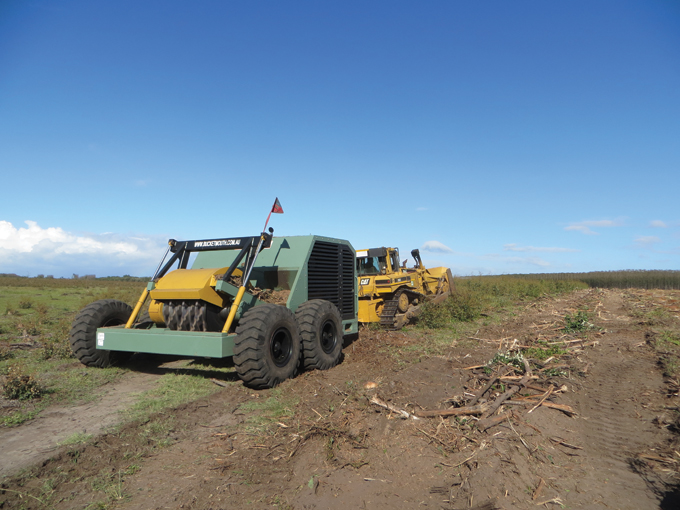 The Bucket Mouth LSG 900 mulcher from Australia. Here it is being pulled by a dozer, but Sappi plans to use a skidder in future as it is better suited to the task. 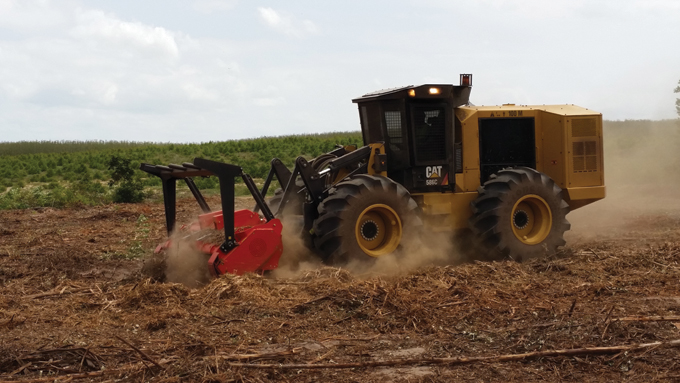 The Cat mulcher on trial at Sappi Zululand. 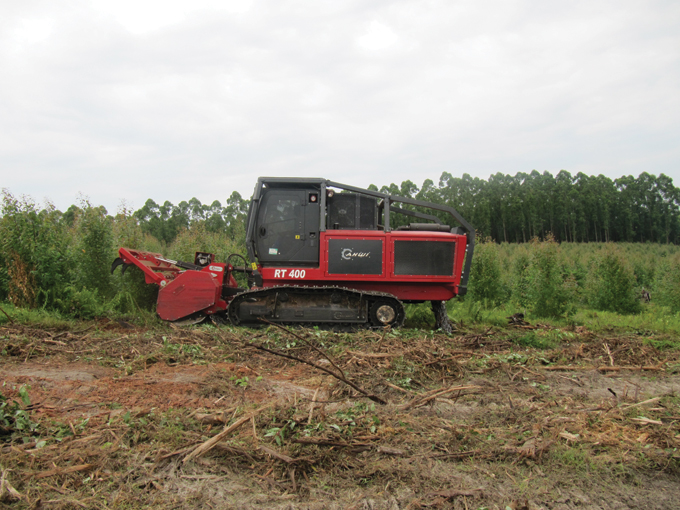 The Ahwi RT 400 at work on Sappi’s Zululand plantations.