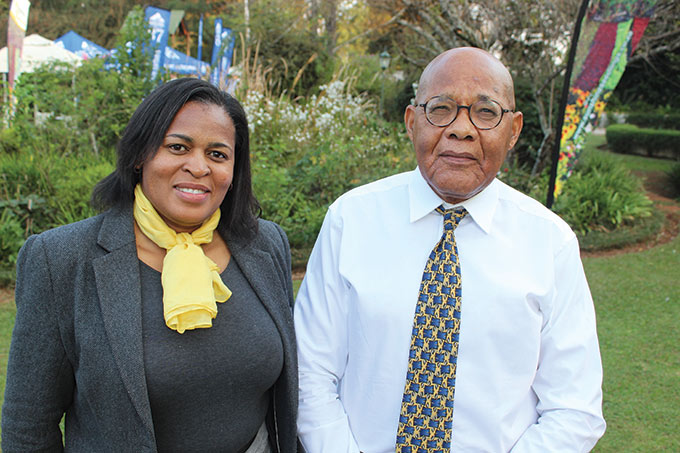 The forestry industry has continued to make great strides in transforming the socio-economic landscape of the sector, with Medium and Large Enterprises (MLE) and Qualifying Small Enterprises (QSE) significantly improving their performance in all five scorecard elements for the first time in the history of the Amended Forest Sector Code. Although still short of achieving 50% of the target for Management Control, MLEs improved their performance for this element by a significant 7.7%.

MLEs improved their average B-BBEE rating to a Level 4 in the current year under review (previously Level 6) while QSEs achieved a Level 2 average, and Exempted Micro-Enterprises (EMEs) Level 3. The recently released Annual Report on the State of Transformation in the Forest Sector 2019/20 notes that concerted efforts are required to encourage QSEs and EMEs to report and lift their transformation performance, as they are the main beneficiaries of the B-BBEE programme.

The overall improved performance of the sector when measured against the Amended Forest Sector Codes has come in the context of a tough economic environment that has constrained the Forest Sector over the past year. The SA economy contracted by 1.4% in the fourth quarter of 2019, with economic growth for the year of just 0.2% - the worst showing since the global financial crisis of 2009.

Rampant timber theft, illegal timber treatment and on-going uncertainties around land reform are some of the factors that have impacted negatively on socio-economic transformation of the sector.

A drop in the number of MLEs and QSEs reporting to the Forest Sector Charter Council has taken some of the shine off the Sector’s transformation performance. This is a disappointment considering that B-BBEE reporting is an imperative for all entities regardless of size as prescribed in the B-BBEE Act as Amended. This highlights the fact that the Forest Sector Charter Council needs to continue or even redouble its efforts to educate forestry stakeholders about the Amended FSC and the importance of consistent reporting.

Overall, the Sector is achieving a Level 4, thus qualifying as ‘preferred’ entities in terms of procurement or allocating projects. Notable performances were observed in the fibre (Level 1) and pole treaters (average Level 3) sub-sectors. 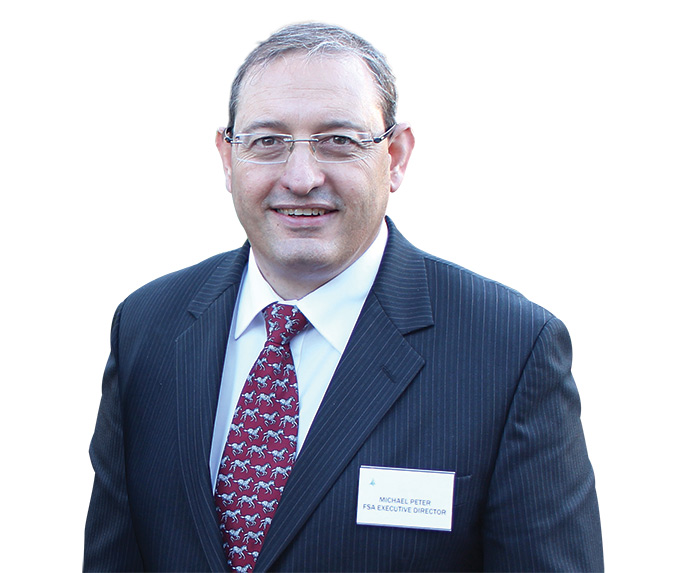 “We are extremely proud of the Forest Sector’s performance in these unprecedented conditions. Our Sector is one of the few sectors in South Africa that annually reports on the status of its transformation performance.” – Michael Peter, Executive Director, Forestry South Africa.

MLEs are required to undertake a B-BBEE verification assessment performed by an accredited, independent entity, and submit their certificate and B-BBEE report to the Forest Sector Charter Council (FSCC).

Twenty-one (21) MLEs (including SAFCOL) reported in the year under review, down from 27 reports received in 2018/19. (The FSCC’s database has a record of 33 MLEs participating in the Forest Sector.)

Only 14 of the 21 MLEs that reported, submitted their underlying reports which provide more in-depth detail about the scores attained under the sub-sections of each element. The 14 entities that submitted underlying information include SAFCOL, which is analysed separately and therefore excluded from the in-depth analysis of other MLEs.

20 of the 21 MLEs have reported before, so only one submission received is from a new entity that has never reported before. Two additional MLEs who reported in the previous year were disqualified due to invalid certificates. 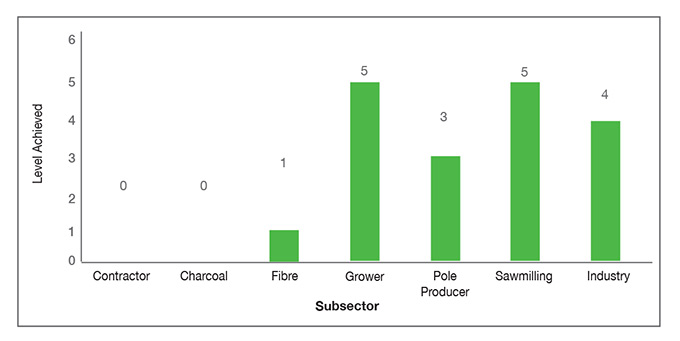 Almost 30% of the MLEs which submitted certificates achieved a Level 1 rating, with the majority of these high performing entities belonging to the fibre subsector. These are typically the large pulp and paper companies.

Another highlight was the average Level 3 rating achieved by six reporting MLEs in the pole treatment subsector. There were no submissions from the charcoal and contracting sub-sectors.

It is commendable that the Forest Sector MLEs improved their performance to achieve a Level 4 average, which is a consequence of improvements in all the scorecard elements, in particular Enterprise and Supplier Development and Ownership which together account for over 60% of total scorecard points.

SAFCOL improved their overall B-BBEE rating form Level 4 to a Level 3 in the current year. However due to its status as a state-owned entity, SAFCOL is not measured on its black ownership profile.

The fact that SAFCOL does not have B-BBEE Facilitator status has had a profound impact on its suppliers, particularly those whose procurement budget is largely allocated to SAFCOL. These entities’ procurement from SAFCOL is not recognised as procurement from black suppliers, resulting in losses of up to 13 points in the Enterprise and Supplier Development scorecard.

Figure 2: MLE Overall Performance per Element as a Percentage of the Compliance Target 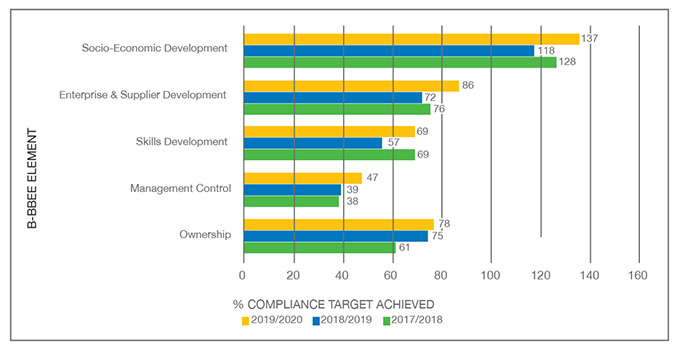 Qualifying Small Enterprises (QSEs)
QSEs are entities with turnover between R10 million and R50 million. This is an important group within the Forest Sector responsible for a wide range of activities, although mostly engaged in contracting.

The current QSE database indicates that there are more than 60 known QSEs participating in the Forest Sector.

Although the number of reporting QSEs has improved this year compared to previous years, the improvement is largely due to the submission of affidavits from enhanced (more than 51% black owned) entities. The overall response from this grouping is disappointing as the majority of QSEs – whether enhanced or non-enhanced – are not reporting to the FSCC.

The majority (65,38%) of reporting QSEs are contractors. In addition, three growers, three fibre-producers, two sawmillers and one pole producer submitted reports. As is the case with MLEs, there were no reports received from the charcoal sub-sector. This raises the point that the bigger entities need to support enterprise development initiatives in this sub-sector.

The QSEs in the fibre sub-sector indicated that they are involved in manufacturing while at least eight contractors indicated involvement in harvesting.

This group is also unique in that majority black-owned (51% and more) QSEs are only required to produce an affidavit confirming their total turnover, black ownership profile and empowerment status.

The intention is to encourage majority black ownership within the sector in these types of entities. Black ownership among the QSE category has increased in every reporting year.

QSEs achieved an average Level 2 rating primarily bolstered by the 21 affidavit submissions of which 13 were Level 2 and eight were Level 1.

However, like MLEs, QSEs appear to be underperforming in respect of Management Control.

In summary it seems that QSEs are complying with the Ownership requirements. The high number of affidavit submissions indicates that a large number of QSEs are majority black-owned. However, seven QSEs contacted telephonically indicated that they were either not interested in B-BBEE reporting or are non-compliant. This is an issue of concern as reporting on B-BBEE is mandatory and non-compliance is not an acceptable excuse for not reporting. Were these QSEs to report, the status of black ownership amongst forestry QSEs may change significantly.

Exempted Micro-Enterprises (EMEs)
EMEs have a turnover below R10 million per annum, and are not expected to carry out specific B-BBEE initiatives to become verified and rated.

Majority black-owned EMEs just like the QSEs are awarded a Level 2 or Level 1 rating depending on the black ownership profile of the measured entity. Any other EME is automatically a Level 4 entity and may elect to be verified using the QSEs scorecard if they want to improve their level and maximise their B-BBEE recognition level.

A total of 21 EMEs submitted affidavits this year, down from 25 certificates affidavits received the previous year.

The majority of EMEs are contractors involved in harvesting, silviculture and short haul transport. Fibre enterprises are mostly involved in manufacture of crates and pallets.

This indicates that there are few black people starting up forestry enterprises. They are either participating at a later stage through the acquisition of shares in established businesses or through employment opportunities.

The average B-BBEE rating of EMEs is Level 3.