Colin Dyer… looking back on a distinguished career in forestry research 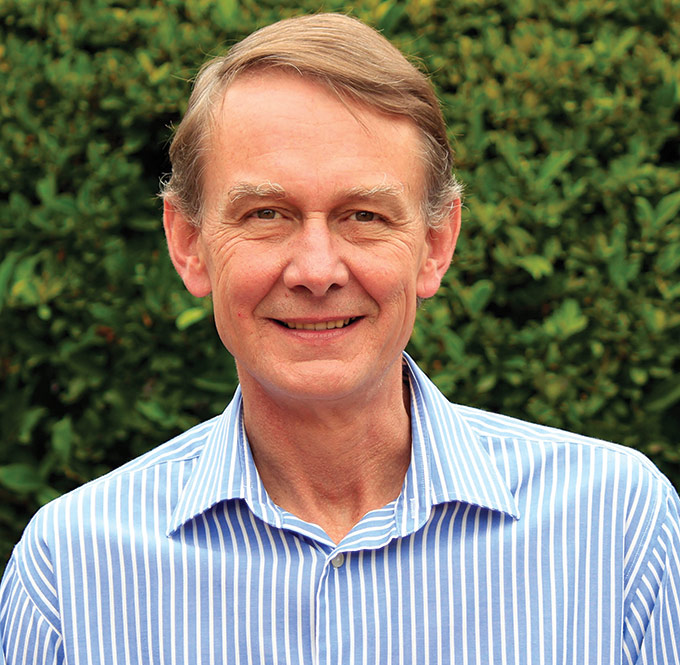 Colin Dyer took over the Directorship of ICFR in 1998, and retires this year.

Prof Colin Dyer is retiring after almost two decades at the helm of the ICFR. Under his leadership the institute has delivered a raft of research that has enabled the commercial forestry sector in SA to steadily improve its productivity within an increasingly complex social, political and economic world, and challenging natural environment.

Colin was born and raised in the small Western Transvaal town of Stilfontein, a mining region – incidentally – that is almost entirely devoid of trees. He completed a BSc (Botany & Zoology) and an Honours degree at Wits University, and joined the Department of Agriculture and Fisheries as a researcher in 1980.

Colin continued studying part-time, completing a MSc, studying bush encroachment, and in 1985 he joined the SA Forestry Research Institute (under the Department of Environment Affairs).

In 1990 he was appointed project leader for Biotechnology and Wood Quality research for the Forestek section of CSIR, which was later merged with Environmentek, becoming Programme Manager for Forestry and Forest Products.

In the meantime Colin completed his Ph.D in Plant Systematics at Wits in 1991.

In 1998, after the then Director of ICFR, Peter Roberts, resigned, Mike Edwards of the SA Forest

Owners’ Association (the precursor to FSA) recruited Colin to head up the ICFR.

The ICFR was a very different kettle of fish to the CSIR, and there were considerable challenges facing the institute, key among which was finding sufficient funding to pay for the research needed by industry.

Government funding for ICFR was dwindling from 1991, and the institute was reliant on contract work secured from the public and private sectors. Those were tough times for forestry research and a lot of capacity was lost as a result.

Furthermore in 1997 (the year before Colin was appointed as Director) the ICFR had broken away from the University of Natal, and so the institute was entirely responsible for its own payroll and admin.

The precarious situation that the ICFR was in prompted the industry to re-evaluate its structure and positioning. Sponsors agreed at a strategic planning workshop held in 1998 to maintain a minimum baseline funding for three years, to move towards direct funding by sponsors for research programmes, and to investigate other funding streams.

Colin describes his move from the government-funded research sector to the ICFR as a bit like “crossing a fence”. Instead of being an ‘outsider’ somewhat isolated from the industry, at the ICFR he found himself part of the forestry ‘family’ for the first time.

“I realised we could work well together with the industry, and we forged a strong collaborative link between ICFR and the industry. This was something new and exciting to me,” remembers Colin.

Colin’s tenure as Director of ICFR has thus been about building bridges as well as building a strong and robust research institute that has sufficient funding security, resources and expertise to deliver research that meets the needs of individual sponsors, and the industry as a whole.

Colin says that this self-reliance has given the institute more flexibility in terms of employment of staff and in terms of research, which has enabled it to be more innovative and responsive to industry’s needs.

“We have built up the institute’s capacity, and it has become a nursery ground for recruitment by the industry,” said Colin.

The ICFR currently has a total staff corps of 52 people, 18 of whom are researchers. There are also 18 post graduate students currently working at ICFR, so its function as a training ground for forestry researchers is another important contribution to the industry.

Colin says that forestry research in South Africa follows a cyclical trajectory, and he believes that it is currently at the end of a cycle and about to enter a new one, with new challenges and opportunities on the horizon.

“Our intention is to grow the public sector funding. Government has a role to play in supporting forestry research – it’s enshrined in the Act.

“The challenge for the future is to ensure a sustainable wood supply in the broad sense. It is becoming more complex. How do you squeeze more out of the same area in a sustainable way.

“I would like to see more independent, small scale growers emerge, to get new entrepreneurs into the industry. They are going to need technical support.”

Colin believes that there must be “push and pull” between industry and research, “otherwise you lose the desire to innovate”.

After 19 years at the helm of ICFR, Colin can look back on a lot of ground-breaking research that has helped the local industry keep pace with global timber markets, improved productivity while contributing to the protection of plantations from a growing list of pests and diseases.

Research highlights
Colin mentioned some of the research highlights that have been achieved during his tenure at ICFR:
• The tree breeding work e.g. the development of cold tolerant species for the Highveld and the recent wattle breeding around cold-tolerance and rust-tolerance.
• The vegetation management research that changed the way growers manage weeds.
• The coppicing recommendations, which changed the way growers manage their coppice crops.
• The work on soil compaction and developing a set of recommendations around that.
• Forest protection: ICFR and Fabi have worked closely together, the Sirex control programme and the Pine Fusarium programme have done great work, and now the focus on Leptocybe and other pests and diseases.
• The fact that so much research has been applied by the industry and is making a difference. Many of the forestry companies’ best operating practices have come out of studies by ICFR researchers.
• Linking research to policy development through the development of the National Forest Protection strategy for the DAFF.
• The establishment of the Forest Science Symposia, creating a forum for forest science in southern Africa.

Colin is also currently Chairman of the SA National Sirex Control Programme, Chairman of the National Forestry Research Forum and an Editorial Board member for the Southern Forests journal.

He will relinquish some of these posts when he officially retires at end June this year.

Considering the broad scope of his influence in the world of commercial forestry research, Colin’s contribution has been immense, and he leaves big shoes to be filled. He will have a lot more time to spend with his family, and to enjoy his many interests, including working with indigenous wood and brewing his own beer.

No doubt the positive impacts of his work in forestry will continue to benefit the industry for many years to come.

Dr Andrew Morris will serve as Director of ICFR in a caretaker capacity for the remainder of 2017, until a full-time Director is appointed in 2018.