Forestry and conservation - an unlikely partnership

Environmentalists and commercial foresters in South Africa frequently find themselves in different camps, pointing fingers at each other from opposite sides of the fence. So the pioneering partnership between the iSimangaliso Wetland Park and SiyaQhubeka Forests, who operate side by side within a World Heritage Site nature reserve, is understandably confusing. In fact this unlikely partnership may be a world first, and proves not only that these two land use activities are not mutually exclusive, but also that government and the private sector can work together. 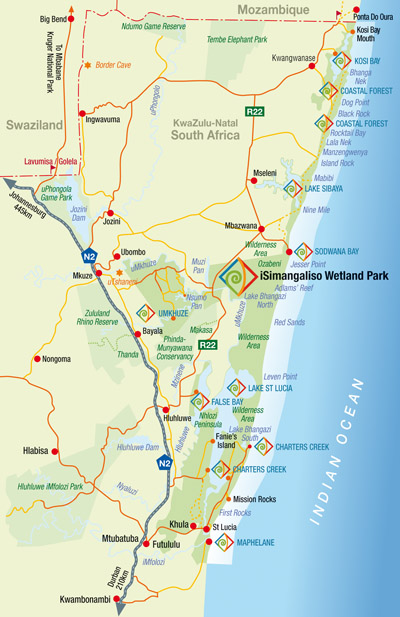 The commercial forests were incorporated into iSimangaliso for a number of reasons:

The question of where it is appropriate to have plantations and where they should be removed in order to secure the integrity of iSimangaliso was the subject of extensive studies and negotiation between the various role players. Given that iSimangaliso is essentially a giant wetland system and commercial forestry is a stream flow reduction activity, the decisions as to where the forestry should end and the Park begin was critical to the long-term success and sustainability of the whole project.

This work was undertaken by a Special Working Group comprising representatives of iSimangaliso KZN Wildlife, the state, NGOs and SiyaQhubeka.

(Afforestation Zone) operated by SiyaQhubeka. It is 158 km long, and has not been drawn in straight lines. Instead it follows the natural features of the landscape, ensuring that important wetlands and catchments are protected while maximizing the area available for forestry.

In terms of the agreement, all the commercial plantations outside of the eco-track have been removed and the rehabilitation of the land to its natural state is continuing.

The Working Group also laid the ground rules of the working relationships between iSimangaliso, SiyaQhubeka, Ezemvelo KZN Wildlife and the communities, including the terms of shared responsibility for the management of the eco-track and the land on either side of it in order to effectively manage both the forestry and Park land.

In terms of the agreement, SiyaQhubeka is to pay for conservation and land management in the Afforestation Zone, which includes patrolling and maintaining the perimeter fence, eco-track, firebreaks and the rehabilitation of those portions of this zone to be rehabilitated to its natural state.

In addition, 3% of turnover from forestry operations is to be allocated to conservation management and research.

The wild animals, which can move unhindered throughout iSimangaliso and the Afforestation Zone, are managed by Ezemvelo KZN Wildlife (formerly KZN Wildlife).

Perhaps this partnership is best understood by considering the benefits that flow to both iSimangaliso and SiyaQhubeka from these complex arrangements.

Benefits for the Park

Benefits for the communities
The reality is that there are 600 000 people living within a 20 km radius of the park's boundaries, in some of the poorest areas in the country. Unless these people see the value of maintaining iSimangaliso as a protected area and derive some benefits therefrom, its long-term sustainability would be under threat.
"The creation of benefits beyond the boundaries of the park is an imperative, whether it's forestry or conservation," explains iSimangaliso CEO Andrew Zaloumis.

Thus, wherever possible people drawn from local communities are employed in land rehabilitation work and/or to provide services in the eco-tourism enterprises. This policy is adhered to by both SQF and iSimangaliso.

Communities are also allowed to collect reeds and other grasses used in the manufacture of crafts, and may graze their cattle in designated areas.

Rehabilitating afforested land back to its natural state
Anybody who went to Cape Vidal in years gone by will remember driving through the endless pine plantations on the strip of land between the coastal dunes and Lake St Lucia. The pine and gum plantations on the Eastern and Western Shores were established by Safcol in the 1950s.

But now the landscape is changing, and all you'll see on the Eastern Shores are indigenous grasslands and woodlands, and a lot of wild animals like buck, rhino, giraffe, buffalo and wildebeest.

If you look closely, however, the commercial tree stumps are still visible, though they will be completely gone in a few years.

These stumps are evidence of the massive clearing of commercial plantations that has occurred in the iSimangaliso Wetland Park (formerly the Greater St Lucia Wetland Park), as it is now known. Since 2000 a total of 14 293 hectares of pine and gum on the Eastern and Western Shores have been clearfelled and the land rehabilitated to its natural state at a cost of some R10,9 million.

The removal of the plantations and rehabilitation of the land hasbeen undertaken under the guidance of an experienced forester, Willie Lacock, who was employed by Safcol and has been seconded to iSimangaliso. SQF took over the Nyalazi and Dukuduku plantations from Safcol after the privatization process in 1999.

The work on the ground has been undertaken by two forestry contracting companies, Thuthugani and Ukula, and 22 small businesses established in terms of iSimangaliso's mandate.

The work methods employed were as follows:

Except for the presence of old stumps, which are rapidly disappearing, and stacks of slash here and there left over from the more recently clearfelled compartments, there appears to be little difference between the rehabilitated land and undisturbed land, and they blend seamlessly into each other. Certainly the presence of wild animals in significant numbers indicates that there is plenty of natural food in the rehabilitated areas.

However there are some differences, which can best be seen from the high coastal dunes which overlook the Eastern Shores. The undisturbed grasslands are more open, whereas the rehabilitated lands have more low woodlands emerging. Careful land management by iSimangaliso, under the guidance of Land Care Technical Manager, Mike Bouwer, is aimed at restoring the natural balance between grasslands and woodlands.

However on-going monitoring and follow-up treatment is essential to keep the weeds out of both the rehabilitated and undisturbed areas, particularly on the Western Shores where Guava is a major problem.

Another indicator of the changing landscape is the presence of water in countless pans, vleis and streams in the rehabilitated areas that were dry during the forestry years. According to Willie and Mike, the water was back within months of the trees being taken out. It's this flow of fresh water which is so important for the health of Lake St Lucia, especially during dry seasons when salinity levels in the lake are high.

It is these considerations that informed the delineation process which identified land suitable for forestry and land which needed to be returned to its natural state.

Regular liaison meetings are held between SQF, iSimangaliso and Ezemvelo Wildlife to align their activities and iron out problems. Issues that arise in these meetings range from sharing information about firebreak/conservation burning, alien weed clearance operations to contingencies around the introduction of new animals to the park, community grazing rights and poaching.

SQF foresters and contractors busy working in the Afforestation Zone receive training in how to behave around wild animals, and contribute information relating to animal conservation and management.

There are no lions in the park, but there are leopard, cheetah and hyena which can be dangerous to humans. Elephants also cross freely from the Park to the plantations, and are frequently seen in the eco-track. The elephants can damage the commercial trees, and there has been one incident of a security guard being killed by an elephant. Such issues are potentially divisive and must be carefully managed.

In the final analysis, the success of the iSimangaliso Wetland Park in protecting an area of rich biodiversity, generating revenue and jobs for the benefit of local communities and maintaining a viable partnership with private forestry will contribute immensely to the success of the region.