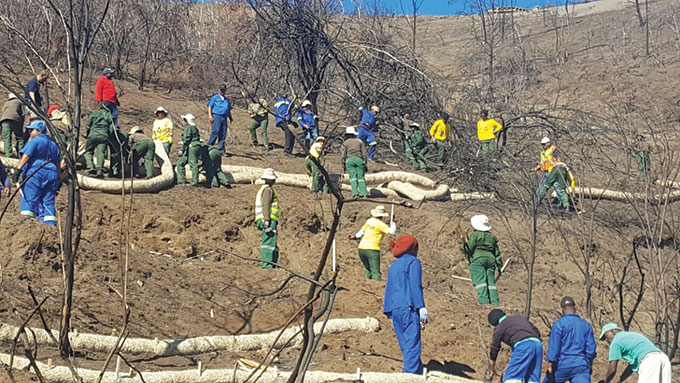 Wood 'wool' sausages being deployed to stop erosion after the fire.

The disastrous June 2017 Garden Route fires sounded a wake-up call to farmers and land managers in South Africa about the disastrous effects of climate change. They are also responsible for reshaping future approaches and preparedness for disaster fires, as well as for the ensuing rehabilitation of the damaged environment. A seminar hosted by the Southern Cape Landowners’ Initiative (SCLI) provided a platform for reflecting on the progress made with environmental recovery.

The seminar was organised by Cobus Meiring of SCLI, as a follow-up of a seminar held just before the Knysna fire. The well-attended and highly successful seminar was co-hosted by the Garden Route Rebuild Initiative (GRRI) under the auspices of the Cape Provincial Government, the Eden District Municipality, the Knysna Municipality, the Nelson Mandela University’s Sustainable Research Unit (NMU SRU), the Southern Cape FPA, Working on Fire (WoF), and DAFF.

The keynote address was delivered by the Premier of the Western Cape, Helen Zille, who instituted the GRRI. She shared her impressions about the achievements of the various work streams, which provide useful models for replication in future wildfire events.

Japie Buckle from the Department of Environment Affairs’ Natural Resource Management Section (DEA NRM) reported that 8 km of wood fibre rolls (or sausages) and 11 000 m² wood blankets have been installed on post fire erosion mitigation projects, and hydro-seeding has been done with teff grass (Eragrostis tef) to serve as an interim soil stabiliser. This will be replaced by indigenous plant growth in time. 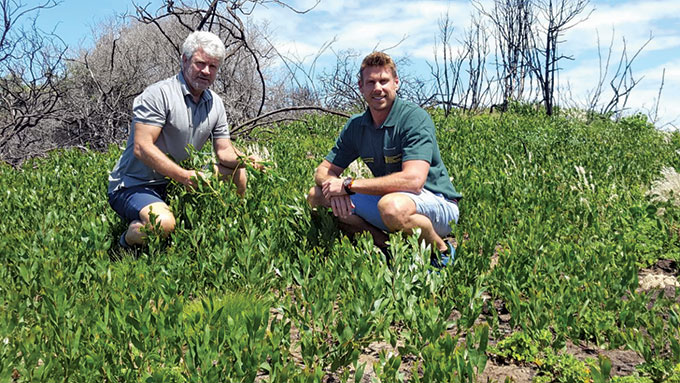 Japie Buckle and Stiaan Kotze of the Department of Environmental Affairs monitor a flush of alien plants a few months after the fire.

Rehabilitation
Challenges for future rehabilitation of indigenous vegetation include a lack of sand fynbos areas from which to harvest seed for sowing in the burn patches where indigenous seed banks have been destroyed. Another is the problem of tackling the regeneration of IAPs by treatment with herbicides within a limited time window.

Diana Turner and the Outramps Crew reported that indigenous vegetation in the dunes came back very slowly, and that as expected there was an explosion of IAPs.

Dr. Tineke Kraaij of NMU reported that two-thirds of the burnt area was located within altered ecosystems and one third in natural vegetation.

She said the fire was extreme and totally consumed humus layers in places. She reported that natural forest damaged by ground fires will recover with time, and milkwood dune forest will recover very slowly. On a positive note, the burning of dune thicket/fynbos mosaic presents an opportunity for fynbos to recover, as the absence of fire over a long period of time has favoured the invasion of woody indigenous species. She said drought would negatively affect regrowth, and dune erosion can be expected.

Christiaan Smit, manager of MTO’s Kruisfontein plantation which was severely hit by the June 2017 fire, presented an innovative approach to determining priorities and achievable targets in tackling weed control within manpower and budgetary constraints.

Heine Muller of PG Bison reported on their efforts to store burnt timber salvaged from about 4 500 ha burnt plantations, in a wet deck system. Logs have been stacked in a line 2,8 km long, and irrigated at a rate equivalent to 50 mm of rain per day from boreholes sunk into an underground aquifer. 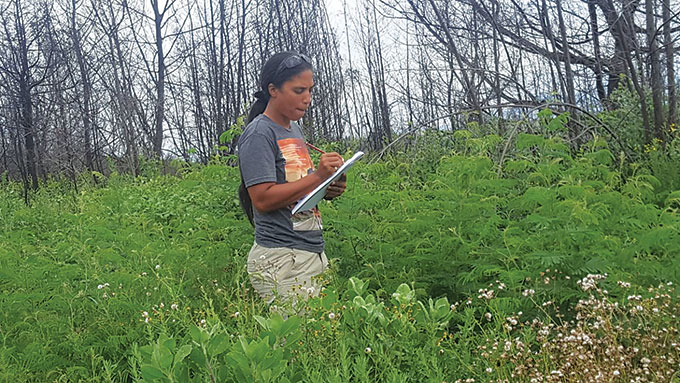 Stilbaai fire
Graphic images of the wildfire tragedy on the rooikrans-infested private farms in the Stilbaai area in February 2017 were displayed by Wim Filmalter of Agriculture, Riversdal. He said that the Knysna fires had diverted attention and financial resources from the Stilbaai farmers’ plight, and they are struggling to rebuild their farms. In the meantime the rooikrans seedlings have germinated and are denser than ever, with manual or tractor-applied herbicide control unfeasible. The only feasible method of control would be aerial spraying.

Willie Auret from Dow AgroSciences informed the audience about the successes of aerial spraying of heavy infestations of Port Jackson wattle on a large farm along the Stilbaai coast, where fynbos species, e.g. Proteaceae, are returning. These successes were obtained with the chemical Confront 360 SL.

However he said aerial spraying is not practical in the Knysna area due to the terrain.

Grant Trebble and Louwtjie Theron of Wood at Heart gave a presentation on their wood fibre products used on steep slopes to prevent erosion. Biomass waste, derived from the harvesting of poplar saw timber on Free State farms, as well as sawmill waste, is processed into wood ‘wool’ and packed into sausages or mats, held together by biodegradable plastic netting.

Their factory in Pretoria is able to produce up to 2.5 tons of wood wool per hour. Production is determined by demand. This firm also supplies equipment for hydro-seeding. These products have made a huge difference in stabilising the denuded slopes around Knysna.

Strategic prioritisation of IAP control in the Garden Route National Park buffer areas is essential, according to Maretha Alant, who presented for SANParks. A recent controlled burn in the vicinity of Buffels Bay, although successful, demonstrated that such burns come with high risks, high costs and logistical challenges.

Keith Spencer, Errol Finkelstein, Dr. Dave Edge and Susan Campbell reported that there had been relatively little regeneration of IAPs in CapeNature’s Goukamma Nature Reserve thanks to stringent alien control programmes implemented over a number of years prior to the fire. Although host plants are recovering, they expressed concern about the survival of the vulnerable Brenton blue butterfly which has a tiny habitat of only a few hectares. However, on a field excursion after the symposium, Dave found some clear evidence that the butterfly species may indeed be recovering after the fire.