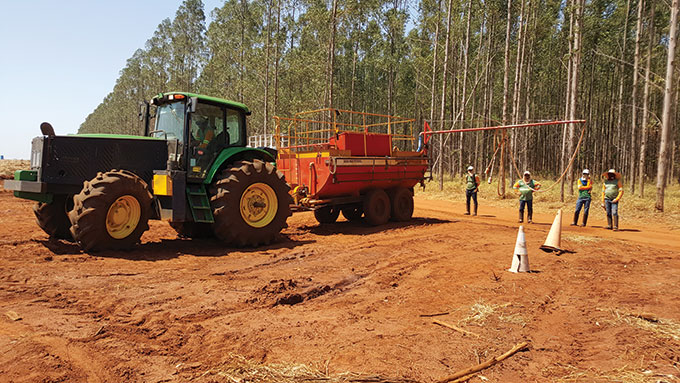 Brazil is a country on the move regarding the establishment of plantation forestry.

Compared to the 1.25 million hectares of forestry in South African forestry, and with an MAI that is about double the South African average MAI, it is clear that we can consider Brazil as a mega forestry country.

Brazil stretches from a similar latitude to Cape Town in the south all the way to the DRC (beyond the equator) in the north. So Brazil is a huge country, most of which is suitable for forestry although there are some imposed restrictions.

A number of international forestry companies as well as local companies are active in the Brazilian forestry sector. These companies include Fibria, Suzano, International Paper and Eldorado, with companies like UPM, Montes del Plata and Weyerhauser also operating in the region. 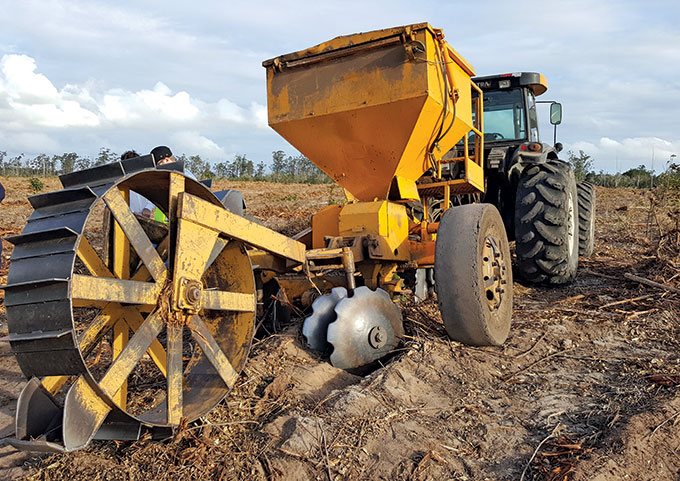 Rip, fert and marking for planting.

Harvest residue
Although forestry areas differ from each other, many things are basically the same everywhere. The management of residue (slash) is one such aspect.

Residue is a huge problem in Brazil. No burning at all is allowed and they do not use residue on a big scale for biofuels, hence the residue is a problem for site preparation.

Two main methods are being used to address this: mulchers and V-blade dozers. Due to the high capital cost involved, residue management is expensive, but required before preparation for the next rotation. In some areas where Eucalyptus compartments were allowed to age beyond the normal rotation age of around six years, the problem is a true nightmare due to the volume and size of the residue.

Residue management will probably remain a problem for the near future until technology makes it easier and more cost effective, or until residue can be used economically as biofuel.

The soils in the areas visited varied in colour from greyish to red. In all instances it was sandy with varying clay content. It was observed that the soil was clogging up the tracks of some tracked machines that could result in instability of the machine on slopes and hence a safety risk. This is only a problem when the moisture content of the soils is such that it supports clogging.

Slopes of up to 38° are planted and harvested. On steep slopes cable systems (tethering) or “winch-assist” is used to ensure the safe operating of machines. Regarding silviculture, efforts are now made to mechanize operations on these slopes. Methods to facilitate silviculture on these slopes include tethering and the adaptation of equipment (like tracks) to cope with the under-foot conditions and improve safety. In general, the soils observed are deep and well suited to support forestry.

The Brazilian nurseries visited were all very modern. The different companies are protecting their genetic material and nursery practice and hence in some nurseries visitors are not allowed to take pictures. 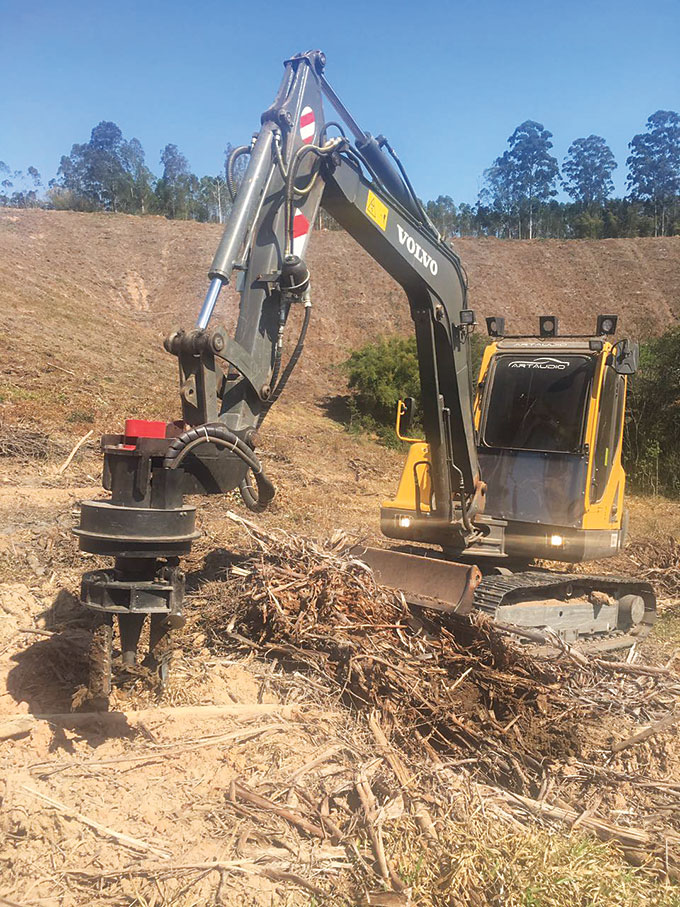 Seedling classification
The general focus is to produce seedlings that are strong and healthy. Some nurseries use scanners to evaluate and classify every seedling. Those that do not making the grade are discarded.

This process assures strong seedlings with a high survival and yield rate, hence preventing the cost of blanking.

The scale of forestry operations combined with the availability and cost of workers make the use of mechanised units compulsory and so the Brazilian forestry industry is highly mechanised. Harvesting equipment comprise of all the well-known brands like Komatsu, John Deere and Tigercat. Both dedicated and hybrid machines are in use and skidders and harvesters are common.

Silviculture is also mechanized, but not modernized. V-blade equipment (dozer tractor pushed and/or drawn), simple bulk water trailers, semi-mechanised planting machines, rippers and discs are all over the place. Irrigation with planting and subsequent irrigation (up to 5 times) is established practice.

Most of the silviculture machines are derivatives of agriculture equipment adapted for use in forestry. The weaknesses of such equipment are apparent internationally as tractors are soft skinned. Forestry tires and kit for protection are fitted to these machines. 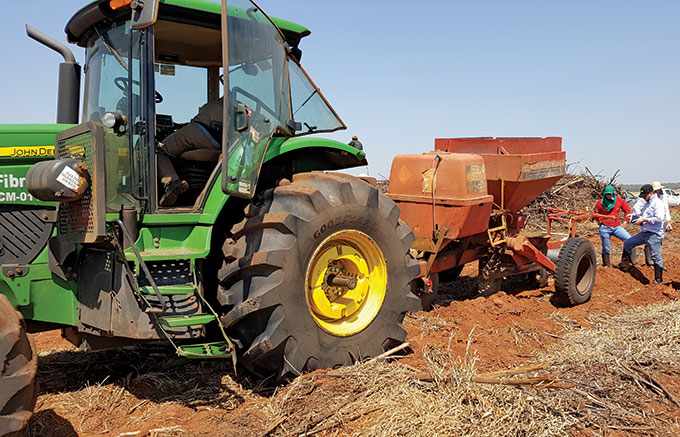 Soil preparation
The main current method of soil preparation is through ripping, but there is also pitting equipment – mechanized and man-manual. It is perceived that continuous cultivation (rip / disc) is more productive than spot cultivation. That being said, it is acknowledged that spot operations are more precise and greener towards the environment than continuous operations.

It is my opinion that there is very little difference regarding the cost of continuous operations versus spot operations, but that spot operations allow for a superior process that assures also consistency of quality (better establishment). Continuous and spot operations will have to be researched thoroughly in future to establish how and where to apply which method to give the best results regarding economics and the environment.

With the new generation GPS systems it is becoming more important to start precision forestry at the planting stage to facilitate future autonomous harvesting. Brazil is firmly set on autonomous operations in the relatively near future. 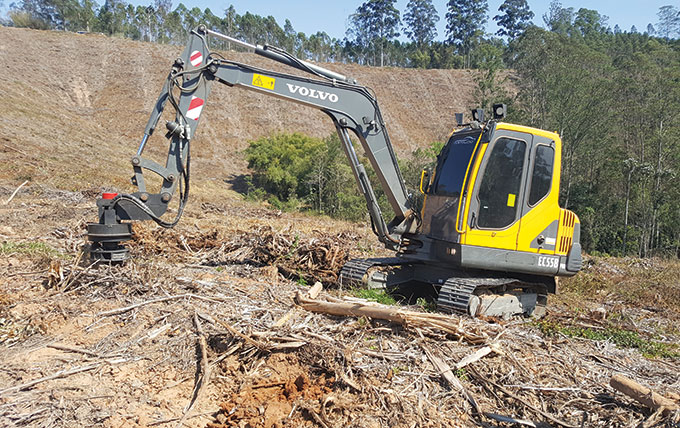 Irrigation is being done with a tractor drawn water trailer with either a belly valve or with dispensers (up to five labourers) following the trailer to irrigate the seedlings.

Unlike many other parts of the forestry world, planting takes precedence over the weather and they do not wait for rain, but rather irrigate until it rains! This is probably a good principle to adopt where practically possible.

This principle can at least extend the planting windows in places like SA and Australia. Vacant land simply presents a lost opportunity.

mechanized after the identification of the nests. Bait will be placed close to the ant nests to control the problem through the use of a tractor and bait dispenser. Every ant nest is also GPS recorded. Some ant combat however is still a manual process.

The drivers of this change include the lack of suitable labour for the plantations in rural areas. This is also the main motivator for the seeking of autonomous equipment to perform forestry activities.

Brazil is a beautiful country with beautiful trees and a very hospitable forestry community! 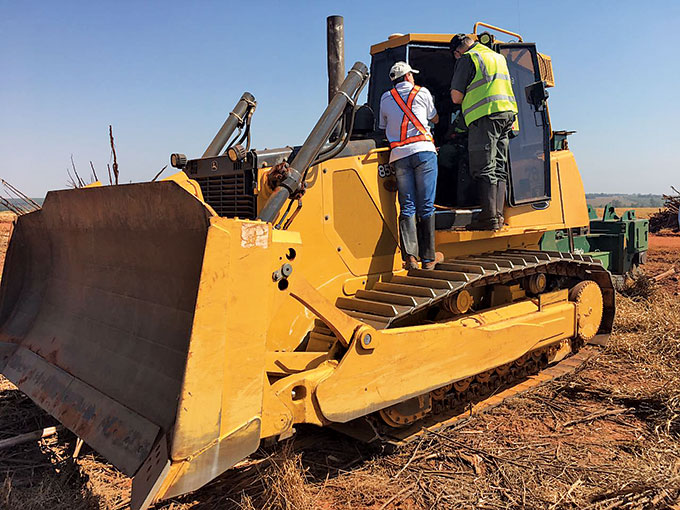