by Pierre Ackerman and Lise Gleasure 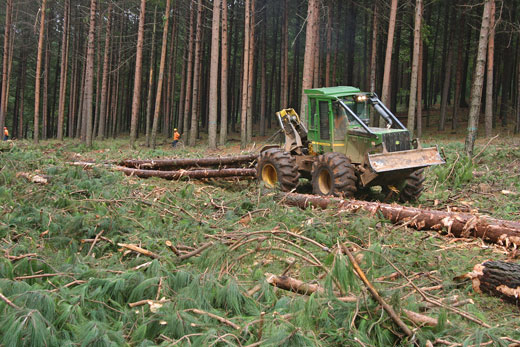 A cable skidder hauls tree-lengths to roadside at the York plantation in the Sabie area. The harvesting operation is by GDH contractors. York's Sabie and Highveld plantations supply logs to the company's five sawmills as well as the plywood plant at Sabie. The harvest site was the first stop of the conference field day. 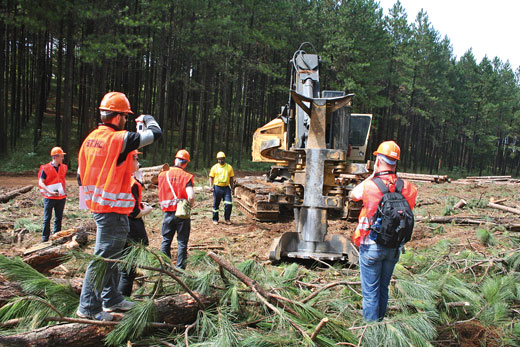 Conference delegates check out the Tigercat feller-buncher at KLF's plantation near Sabie. In this harvesting operation, the tree lengths are hauled to the landing with a grapple skidder where they are cross-cut manually. The first two to three logs are peeled for veneer, the medium size logs go to the sawmill, and the small top logs are used for pulp.

The Forest Engineering Conference (FEC), an international event held every four years, is a forum for forest engineers from around the world to share their knowledge, experience, and emerging ideas. The stewardship of the FEC lies with the international forest engineering community as a whole. This meeting follows previous successful FEC events held in Canada (2007), Sweden (2003) and Scotland in 1999.

There were some 70 presentations on the five sub-themes. The first of these was New Equipment Monitoring Approaches. The presentations considered innovative ways to monitor equipment and therefore increase efficiency. A selection of topics included StanForD, GPS coordinates in three dimensions and analysing the large resulting datasets from machine monitoring using robust regression.

The second sub-theme was Man and Machine Interactions. Presentations considered safety and improving machine ergonomics. Presentations focused on topics such as accident reporting among workers, developing new suspension systems for forwarders, and analysing worker stresses both on the physical and mental level.

The third sub-theme was Harvest Systems Development, with the focus on improvements in technology, both through looking at theory and current practices and through innovation in machine design. Presentations included topics such as multi-felling tree equipment, evaluation of current biomass harvesting systems, and forces required to remove stumps.

The fourth sub-theme attracted the largest group of presenters and was titled Value-Chain Optimisation: from forest to industry/customer. Research and presentations focused on all areas of the value-chain, including forest road upgrading, airborne laser scanning for harvest planning, and challenges and adaptations in a changing business environment.

The fifth and final sub-theme was Technology Adaptation for Specific Environmental or Technical Demands. The presentations focused on adapting to unique situations, although many of these situations have applications to greater areas, such as using GIS with soil moisture gradients to signal via GPS higher soil compaction risk to operators. Others were more specific, such as examining mechanised tree planting for small forest owners in Sweden.

The conference keynote speakers, Russell Morkel, Rolf Borheden, Rien Visser, Jean-Francois Gingras and Ronald Heath, discussed both the history of the forest industry and the current situation. The forest industry continues to face many challenges, some which are novel, for example, sustainability and bio-energy, and others which have their roots in history, such as the constant struggle to remain competitive amongst changing markets and global financial insecurity.

Throughout this conference it became very clear that the field of forest engineering is continuing to strive for excellence; research was cutting edge and innovative, often providing elegant solutions to complicated problems.

The conference was deemed to have been extremely successful in both the organisation and scientific content by the organisers, the FEC scientific committee and the attending delegates and that the continuance of the FEC must remain high priority within the International Forest engineering fraternity. The future of the FEC was discussed at length during the conference by the current FEC steering committee, which is made of the scientific review committee of the FEC 2011.

For more info
The programme and proceedings are available from www.sun.ac.za/forestry. For any other information regarding the conference or the future of the FEC, contact Pierre Ackerman at packer@sun.ac.za; Tel: 021 808 3293.

The conference closed with plans for the Fifth Forest Engineering Conference to be held in France, under the direction of l'Institut Technologique Forêt Cellulose Bois-Construction Ameublement (FCBA) and main organiser Maryse Bigot.