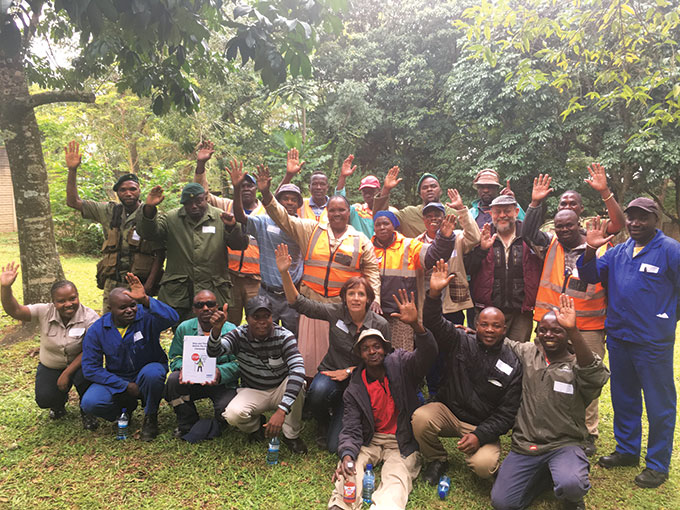 Sappi Forests has introduced a new safety initiative driven by a powerful behaviour change campaign to improve safety performance and make Sappi ‘Twice as Safe’ by 2020.

The initiative is based on a simple process of getting people engaged in forestry work to have a high level of awareness of potential hazards and to stop and think before they act.

The key to the success of the initiative has been in the extent of the consultation and engagement with the stakeholders, the restoration of trust, clarification of roles and responsibilities, and the use of visual stories and images to communicate the safety message that transcend differences in language and culture. 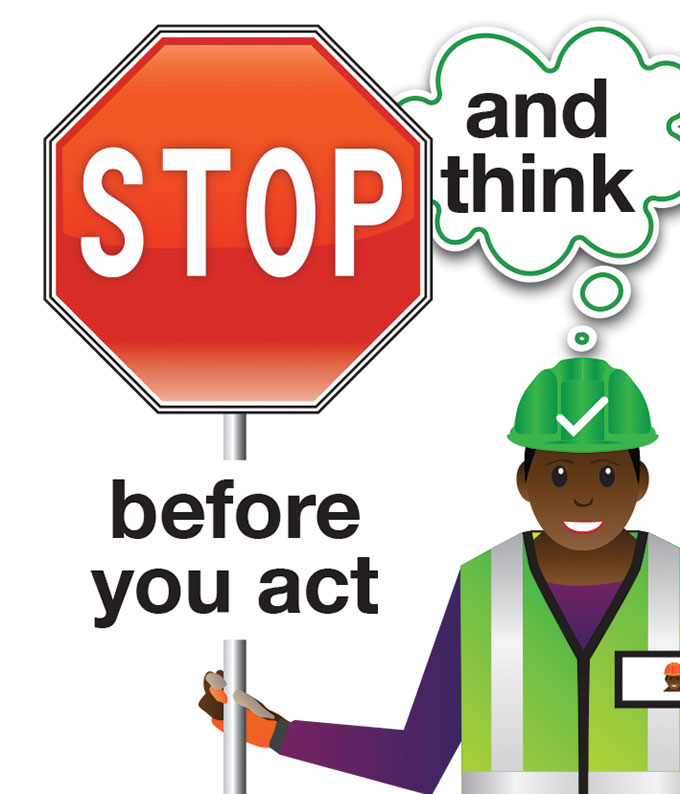 The aim is to create a safer workplace by changing people’s attitudes and behaviour at work and at home.

Monitoring by the Sappi Forests team has shown that, despite initial resistance, the primary stakeholders have bought into the campaign and there has been a significant improvement in safety performance as a result. Additional impacts include improved relationships between Sappi’s forestry staff, contractors and workers – and improved productivity.

The Stop-Think-Act initiative was developed after an assessment of safety management in Sappi Forests and contractor businesses by leading international consultants, Forme Consulting and the Metsä Group.

Devcom and the Sappi team also conducted in-depth assessments of the impact of its communications on safety among stakeholders.

These studies revealed that SF’s safe work procedures were cumbersome, written documents which were not well understood by the work force, who come from diverse backgrounds, with different cultures, languages and dialects. As a result, safety messages were getting lost in translation.

Moreover the increase in the number of serious safety incidents over the past few years deeply affected Sappi staff and contractor management who felt responsible, and carried the burden of safety performance. It affected relationships as well as morale.

For safety to improve, SF had to simplify safety communication, and establish a safety culture that would encourage creativity and innovation. 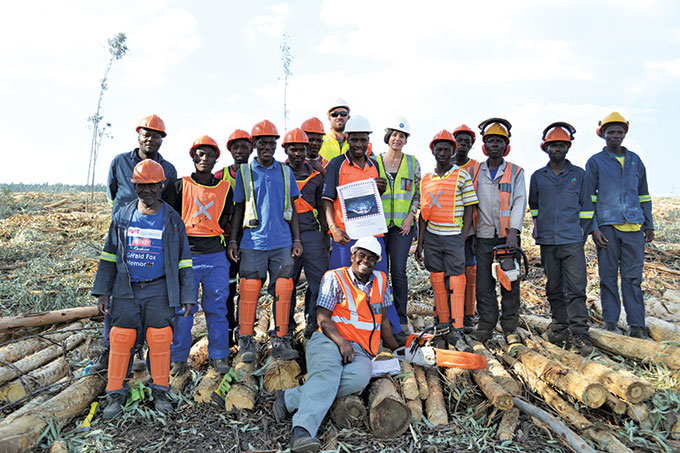 Engaging with stakeholders
The Sappi team engaged with primary stakeholders to develop a new approach to communicating safety that transcends language and cultural barrriers. Each group was empowered by providing them with a simple risk mitigation tool to guide them, based on the concept of Stop-Think-Act.

Each group was assigned clear roles and responsibilities:
• the Sappi Forests operational team as supporters of STA;
• contractor bosses as owners, leaders and supporters of STA;
• safety officers as the STA ‘change agents’ on the shop floor;
• the contractor labour who need to understand the STA process and implement it every hour, every day.

A story-telling approach was developed that workers engage with on an emotional level. The STA process was written into a visual story with key characters and images that workers could relate to.

The main characters of the safety stories are:
• ‘Clever Me’ - the one who is aware of the hazards and always stops and thinks before he acts.
• ‘Stupid Me’ - the one who ignores the risks and acts without thinking. This is not necessarily a stupid person, but he/she is behaving stupidly by not stopping and thinking of the consequences of unsafe actions. ‘Stupid Me’ can become ‘Clever Me’ just by changing his/her attitude and behaviour towards safety. (One group chose to name this character ‘Irresponsible Me’ as they felt ‘Stupid Me’ was impolite.)
• The Black Mamba was chosen by the workers as a symbol to represent hazard.

High visibility in the field
High visibility of STA symbols in the workplace serve as a trigger for people to apply STA in their everyday activities.

Sustained stakeholder engagement over many months succeeded in overcoming initial cynicism among Sappi operational staff and contractor staff that this wasn’t just another management ‘gimmick’.

The proof of STA’s impacts are visible in the improving relationships and safety performance at Sappi Forests.

People are also taking the safety messages home to their families. And as many of the contractors work for other forestry companies besides Sappi, their improved attitude to safety could have a positive impact across the sector. 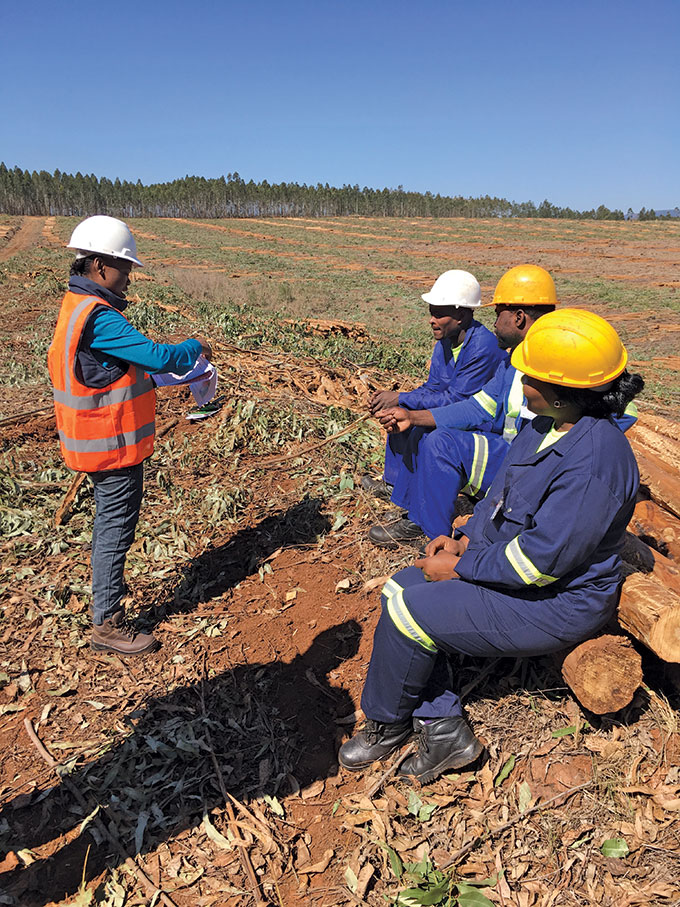 Reaching all stakeholders
• 486 contractor safety leaders attended Train the Trainer sessions where they were up-skilled in communication and facilitation. Qualitative reviewing in class of knowledge and presentation skills showed a high adoption and capability rate and showed an increased knowledge of STA.
• Over 10,000 people (almost 100% of the target audience) were trained to apply the STA behaviour process. Research shows a high adoption of STA which reduced at risk behaviour, as indicated by the safety statistics.
• 41 consultation meetings and workshops were held with contractors and labour. 576 people attended these sessions (496 contractor and 80 Sappi Forests). The aim was to create understanding of and gain support for the Stop Think Act initiative. These sessions resulted in improved engagement and uptake of the STA initiative.

Hazards ever-present in forestry environment
Sappi Forests owns and manages 388 000 ha of land in Mpumalanga and KwaZulu-Natal, South Africa. Plantations are widespread and are mostly located in remote rural areas.

90% of Sappi’s forestry operations are outsourced to 76 private contractors, who employ almost 10 000 people. These workers are the most at risk as the physical environment in which they work is often rugged and the weather harsh. Safety hazards are ever-present.

Sappi Forests contractors are held to the same safety standards that apply to SF employees, and contractor safety statistics are included in Sappi’s safety reporting.

A dip in safety performance in 2015 and 2016 prompted Sappi Forests’ to do an in-depth analysis of their safety management in order to develop a new approach to safety.

Contractor survey
A Contractor Survey was conducted in mid-2017 (82% of all contractors participated).
• 100% stated: I have seen evidence that Sappi’s employees are making an effort to improve communication throughout the business.
• 87% stated: My business is benefiting from the efforts to improve communication.
• 100% stated that: Sappi’s approach to implementing the Stop Think Act campaign is living up

It has been an amazing journey!!!
Sappi contractors have embraced this approach towards safety and their support contributed tremendously in the success of the Stop and Think before you Act campaign rollout. The feedback is positive, operational teams are taking ownership of their safety and others, thus becoming more confident in communicating their risks and mitigations. Safety has become everyone's responsibility and priority number one. The Stop and Think before you Act approach towards safety encourages teamwork, proactive thinking and continuous collaboration from all stakeholders to ensure zero injuries work environment.
By: Nonhlanhla Nxumalo (Sappi KZN)