Home » The future of tree breeding at Sappi 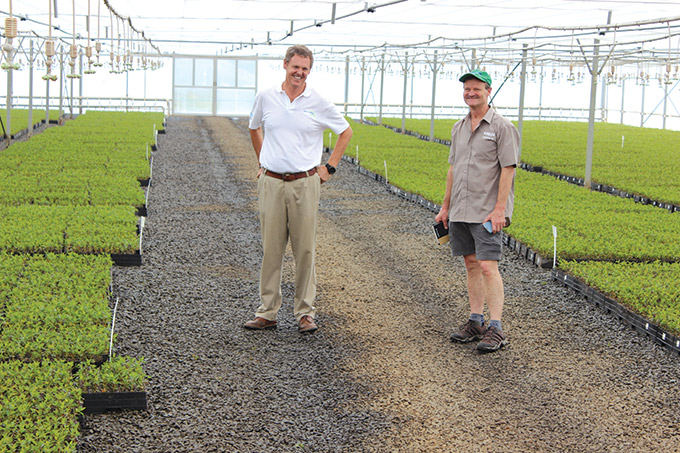 Wynand de Swardt and Arnulf Kanzler in the rooting tunnel at Clan.

A rapid shift from planting pure species to more productive, better adapted and more pest and disease resistant hybrids is transforming the profile of both hardwood and softwood trees grown in Sappi’s South African plantations.

The strategy is being driven by Sappi’s expert tree breeding team based at the Shaw Research Centre near Howick, led by Dr Arnulf Kanzler, and the ramping up of capacity for the production of rooted cuttings at Sappi’s nurseries.

Sappi started planting GU and GC hybrids in Zululand in the 1990s, mainly in response to an increase in pest and disease damage, but continued planting pure species in the cool temperate and warm temperate regions alongside GN hybrids.

The shift to hybrids has accelerated over the past few years in response to environmental factors and the need to improve fibre yield and quality. South Africa’s land suitable for growing trees is limited, so it’s imperative to produce more with less.

The vision is that by 2025 all of the hardwoods being planted by Sappi will be hybrids or improved varieties, and the vast majority will be propagated in the nurseries as rooted cuttings. 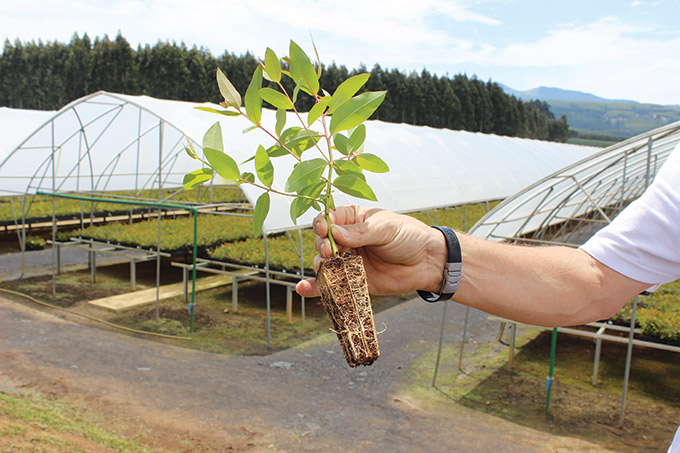 This healthy cutting with well developed root structure is ready to be planted out in the field.

Key drivers of the strategy are the impacts of globalization and changing weather patterns which require tree breeders to respond rapidly to provide foresters with multiple options for planting. Sappi’s foresters require trees that are resistant to pests and diseases, better adapted to site and changing weather patterns and with wood properties that are better suited to rapidly developing new markets.

Sappi’s tree breeders have refined their techniques for breeding, selecting and testing new hybrid varieties with the aid of genetic tools. These superior varieties can be propagated at scale in the nurseries and planted out so that the genetic gains can be realized much sooner than has been the case in the past.

This fast turnaround time has become critical for tree breeders and planners to cope with the dynamic challenges and demands of a globalized world.

The development of Sappi’s state-of-the-art Clan nursery at Albert Falls in the KZN midlands has been central to the rapid deployment of improved trees into the plantations. 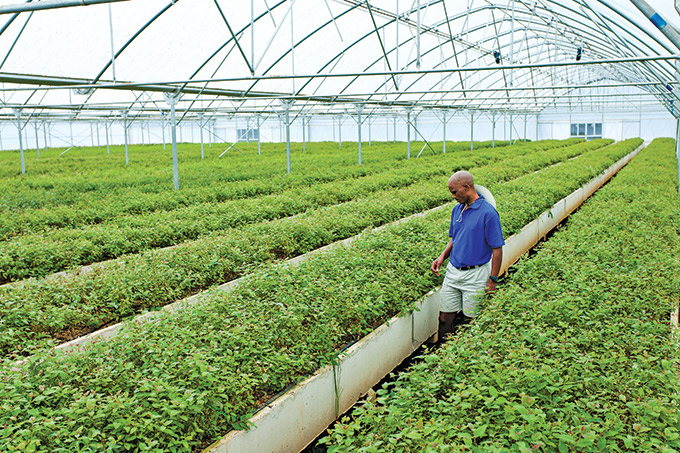 Clan nursery manager Arthur Ndlovu checks the condition of hedges. There are 900 000 hedges at Clan, planted in custom built, v-shaped concrete tables. The cuttings are taken from these hedges and placed in the growing medium. (Photo courtesy of Sappi)

Clan is a high-tech nursery capable of producing some 17 million rooted cuttings a year. Temperature and humidity is carefully controlled throughout the nursery which was purpose-built near the site of the old Sappi Clan sawmill. Producing cuttings is more labour and skills intensive than seedling production, and Clan has a compliment of 180 staff members working under the watchful eye of nursery manager Arthur Ndlovu.

Every aspect of the nursery, including water supply, pumps, power and computer controls, has a back-up in place to mitigate risk. Any variation in temperature and humidity can be catastrophic – especially for cuttings in the rooting tunnels, which are extremely fragile. 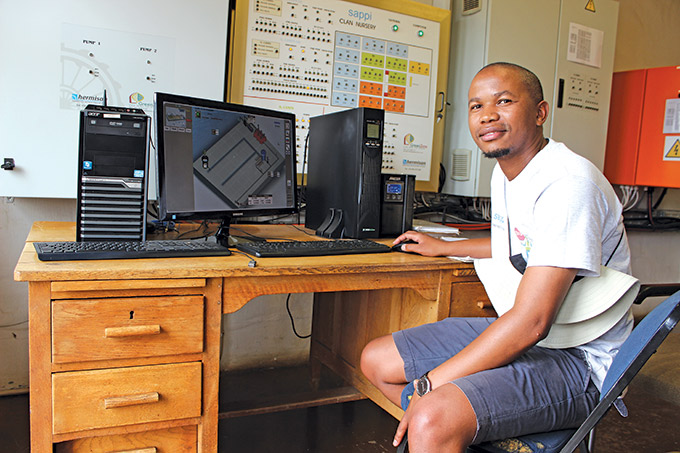 Senior nurseryman Bongani Shozi keeps a close eye on the computer throughout the day. 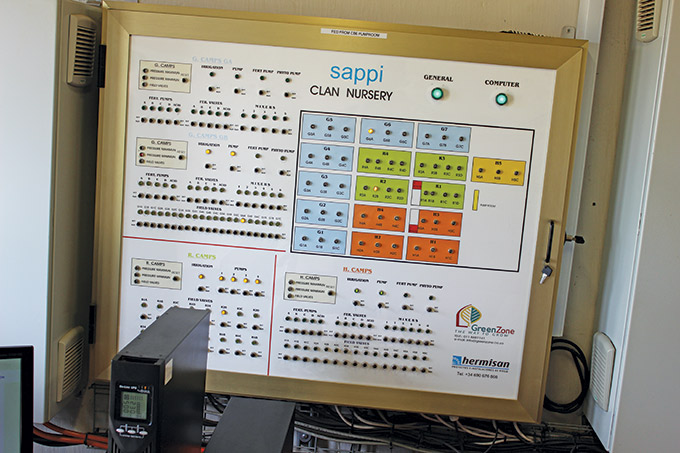 This computer programme controls temperature and humidity in every tunnel at Clan.

Divisional Nurseries Manager Wynand de Swardt said that there are 10 million cuttings in the rooting tunnels at Clan at any one time, and you will start losing plants if you’re out of water for seven minutes on a hot day. If there is no water in the rooting tunnel for 30 minutes to an hour, you could lose all the plants in the tunnels, he said.

Thus the level of management and control throughout the nursery is intensive and critically important.

Keeping track of the different varieties, from initial selection all the way through to the field, is another critical aspect of the business. Constant feedback from customers, mills and foresters is used by the tree breeding and nursery teams to come up with new, more productive and better adapted varieties.

Sappi’s Ngodwana nursery is currently undergoing major development to increase cuttings capacity to supply Sappi’s plantations in Mpumalanga. This nursery will have a staff of 120 once optimum production is reached, said Wynand.

The Escarpment nursery, also in Mpumalanga, is geared to produce 3 million pine cuttings, while the Richmond nursery in KZN produces hardwood and softwood seedlings.

All four of these nurseries supplied a total of 47 million plants (seedlings and rooted cuttings) to Sappi’s South African plantations in 2017 which constituted the bulk of their annual requirements, with additional plants coming from leading commercial nurseries around the country. 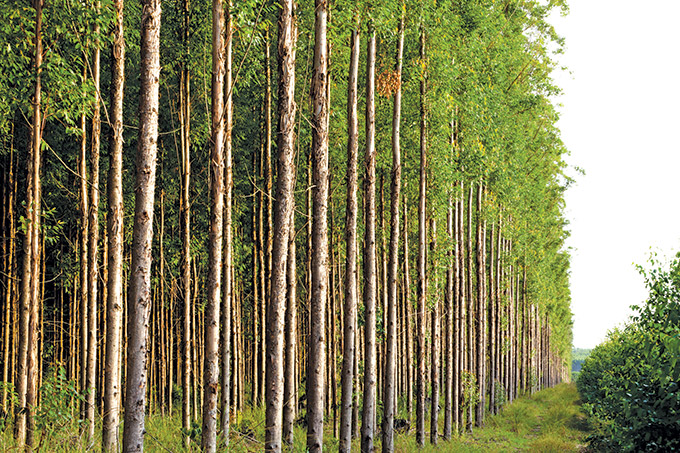 Arnulf said that forestry beyond 2030 will be largely hybrid varietal (cuttings), with varieties being replaced every six years. He expects rotation ages for hardwoods (depending on site) to be reduced to five years and possibly as low as 12 years for pine. Response times will need to be fast (three years).

Phenotyping will include taking measurements in conventional trials using rapid screening methods, and measurement of whole stands using drones or satellite technology. In addition, the rate of breeding and selection efficiency will be greatly enhanced as a result of rapidly expanding understanding of molecular genetics.

Co-operation between tree breeders, physiologists, biotechnologists, foresters, end-users and policy makers will be essential to ensure that the forests continue to meet the demands of the market.

“It’s an exciting time to be a tree breeder,” concluded Arnulf. 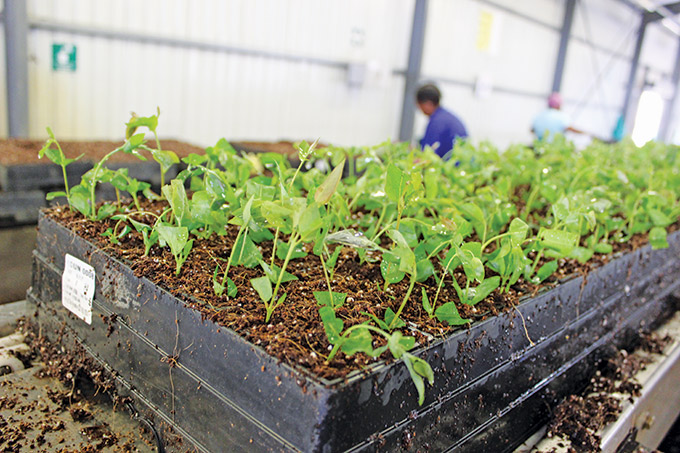 These cuttings have just been placed carefully in the growing medium. They will be taken to the rooting shed and nurtured for several weeks until they have developed roots.

It’s all systems go for Focus on Forestry 2019, being held at the Ingwenyama Resort, near Nelspruit, Mpumalanga, from 10

A passion for the environment has prompted the management of Sunshine Seedling Services to seek solutions based on renewable energy,

When the forestry industry started to diversify into eucalypts back in the 1960s, many of us found ourselves in unknown

A rapid shift from planting pure species to more productive, better adapted and more pest and disease resistant hybrids is