With the traditional spacing for pine sawlog production, trees situated next to the roads are usually thicker (have more volume) than the trees inside the compartment, because there is less competition between the trees for sunlight, moisture and nutrients at the roadside. With the KISS regime, this principal is used to give each tree an opening of eight meters on the one side throughout its rotation.

In a nutshell the KISS method optimises the use of the land and will give three yields of mature trees of 300 s.p.ha (stems per hectare) per rotation versus one yield with the traditional rotation method. It also has the following benefits:

Advantages of the KISS regime

The yield
With the traditional spacing trees next to the roads are usually thicker and bigger than the trees inside the compartment, because there is less competition for resources at the roadside. With the KISS regime this principal is used to give each tree an opening of eight metres on the one side throughout its rotation, thus enabling those trees to benefit from extra resources throughout the growing cycle.

The yield should also be higher due to the fact that over a rotation the land lies unused for months between clearfelling and planting. Furthermore it takes the newly planted trees three years or more (depending on MAI) to fully utilise all of the open land.

That gives a 16% loss on potential volume (income) growth on a 25-year rotation due to the fact that about four years of potential growth is lost with every rotation (4/25 x 100).

With the KISS regime the land will be forever fully utilised once it reaches normality – after 16, 18 or 20 years, depending on whether you use a 24, 27 or 30-year rotation.

Thinning
No more thinning. The clearfelling of the mature tree strips (every 8, 9 or 10 years) actually serves as a thinning.

Fire prevention
As wildfire is a plantation’s biggest hazard, why would you plant your trees at such a spacing that makes it difficult (or impossible) to get to any place within the compartment with a fire tanker?

With the KISS regime access to any place in the compartment (as long as it’s not too steep or rocky) with a fire tanker is very easy, and fires will be extin- guished much quicker, saving uncalculated losses.

Ploughed fire brakes
Ploughing fire breaks within the compartment where needed are some of the many advantages that the KISS planting regime allows.

The outcome
The whole compartment consists of strips with two lines of trees planted at 2m x 2m spacing. The strips run parallel to each other with an eight meter opening on both sides of each 2m x 2m strip.

If your normal rotation age is 30 years, you will clearfell and replant every 3rd strip every 10 years. That clear-felling of 30-year-old mature trees will give you ± 300 trees (or 333 trees of full stems) per hectare.

The open strip on the left was harvested and will be replanted soon. This open strip is now 18 meters wide, but after the 2m x 2m strip in the middle is replanted the opening between all the 2m x 2 strips will again be eight meters. Pinus elliottii (Tsitsikamma) 10-year-old, had a 5m pruning. 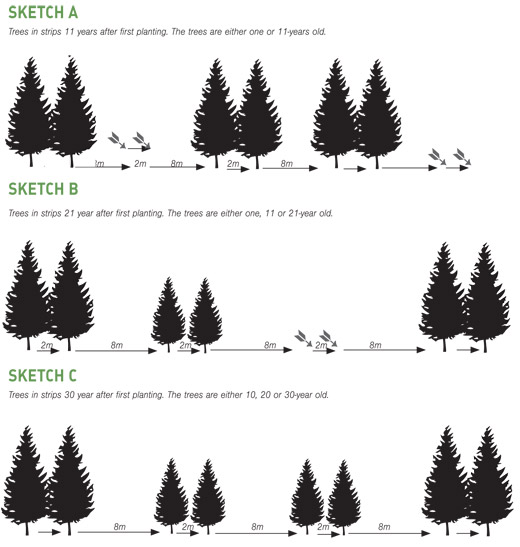 * Michael Olivier is a former forester based at Lebanon Plantation, Grabouw. Michael said during his forestry days he regularly received complaints from members of the public who objected to the ‘eyesore’ that occurred after clearfelling – especially in areas close to town. This, he was told, was not good for tourism. After giving it a lot of thought, Michael came up with this unique planting regime he called ‘KISS’ in 2001, which eliminated clearfelling and – he claims – maximises productivity of the land. Michael says three plots have subsequently been planted to the KISS regime – one at Cape Pine’s Blueliliesbush plantation and two at Saasveld.