Over the past decade, there have been a number of studies done in South Africa on the ergonomics of forestry work. These studies looked at the impacts of different types of work on the health and wellbeing of workers, and their ability to perform their tasks on an ongoing basis. All studies reviewed present a similar finding: that there is a severe mismatch between the physical demands of certain types of forestry work and workers' capabilities. High-risk jobs include chainsaw operators, bark strippers, and log stackers/carriers. 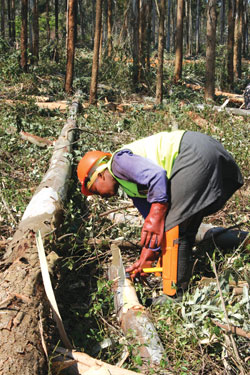 In addition, these and other types of forest work are associated with high levels of musculoskeletal strain and injury. This research points to a severe health and safety crisis among forest workers in the country, in particular those involved in forest harvesting.

"Recognising that harvesting is a physically demanding job, and that for several years to come the bulk of harvesting in South Africa will be dependent on manual labourers from low income rural workers, the companies and the contractors MUST take more responsibility for workers general wellbeing" Scott, et al, 2004.

Although there has been a significant shift towards mechanised harvesting since this study was carried out, manual harvesting is still widely practiced and many of the concerns raised by these studies remain pertinent. Few, if any, of the clear recommendations made by these studies have been implemented throughout the industry. This article summarises the main findings of this research and recaps the main recommendations.

Physical demands of many types of forestry work were found to be similar to those of running a marathon, but unlike the marathon runner, a forest worker is expected to perform this work eight-nine hours a day for five-six days a week.

Researchers measured the heart rates of workers engaged in various types of work, as an index of physical exertion. The general rule is that heart rates should not exceed 110 beats a minute for sustained work over several hours, yet the exertion required of many types of forest work resulted in heart beats in excess of 180 beats a minute. This combined with poor nutrition, chronic illness, dehydration and insufficient rest result in physical exhaustion and a decline in cognitive abilities during the course of a day. These conditions negatively affect productivity and increase the risk of errors and accidents.

Certain types of forestry work result in excessive musculoskeletal strain and place workers at risk of long-term injury. Log stackers move weights of up to 30 tons per day, and lift individual loads that would challenge the average body builder.

The effect of the work over long periods is very damaging and carries a high risk of long-term injury, particularly to the lower back and shoulders. Certain postures and methods of carrying poles have been shown to be particularly damaging, especially stooping or twisting while lifting, lifting excessive loads, and carrying poles on shoulders.

Bark stripping is another job that places workers at risk of long-term injury. The stooped posture required to strip bark causes strain and permanent injury to the lower back.

The authors strongly urge all employers to pay much closer attention to the problems highlighted through these studies and take measures to identify and address specific risks in their own working environment, in consultation with affected workers, supervisors and managers. The main recommendations made by the authors are as follows:

1. Phasing out of the task system

Irresponsible use of the task system is seen as a key driver of physically damaging behaviour, such as the reluctance to rest, drink and eat enough during shifts. Task levels of certain jobs were found to be unacceptably high, raising the intensity of work to unacceptable levels.

Workers need regular rest periods during shifts and enough rest between one shift and another in order to recover sufficiently. Many workers have to travel long distances to work and this cuts down on the rest time between shifts, and can lead to sleep deprivation as well as insufficient recovery time. Researchers also found that workers, especially those on the task system, do not take enough rest during the day to maintain the high levels of physical exertion required of them.

Employers should enforce rest breaks and ensure workers have a comfortable and sheltered place to rest during the day. A mid-shift rest period of at least 30 minutes is recommended, as well as two 15 minutes rest periods before and after the mid-shift break. More frequent rest periods may be required if it is very hot or the work is especially demanding. Where workers are away from home for 12 hours or more per shift as a result of long travelling distances and problems with transport, steps should be taken to reduce travel time, such as the provision of transport and the improvement of the efficiency of worker transportation services.

The studies found dehydration to be a serious problem among forest workers. A study conducted by the ICFR found that 55% of workers arrived at work already dehydrated, rising to more that 70% at the end of the shift (James, 2005).

Reasons for poor hydration include an inadequate supply of water, water containers were not easily accessible, and water supplied was warm and/or unpalatable. The lack of adequate rest breaks also affected hydration, with workers reluctant to interrupt tasks to drink. It is essential for employers to provide a sufficient quantity of fresh, cool water in field and ensure that workers drink regularly, at least every hour in hot conditions. A supply of at least four-five litres of water per person per day is required.

Studies have found that many workers do not eat at all before coming to work, and some do not eat at all until after they finish work. Not eating before commencing work and during work results in low blood pressure, fatigue and lapses in concentration, which in turn increases the risk of accidents and injuries in an already hazardous working environment. Inadequate nutrition also affects workers abilities to perform physically demanding work, and limits their productivity.

Problems of poor nutrition are even more serious for workers suffering from HIV/Aids and those on ARVs. It is highly recommended that employers provide workers with some sort of nutritional supplement at the start of the working day and if workers do not bring their own food to work, during the shift as well.

Employers are urged to pay attention to symptoms of physical discomfort and injury associated with strenuous jobs and those with awkward working postures, and take steps to address these, including the following:

Any initiative to change the culture and practice of the workplace needs the full support of workers and supervisors to succeed, which can best be achieved by raising awareness and involving workers in identifying and producing solutions to the main health and safety risks associated with forest work.

These and other studies have drawn attention to the unsustainable nature of forest work resulting from the shift to contracting, as well as irresponsible use of the task system. Workers are expected, and have come to expect, that they must keep working in order to complete tasks, irrespective of the level of physical discomfort experienced. Many were found to work without rest, in some cases without drinking or eating for the duration of their shifts. Supervisors are expected to ensure productivity above all else. Contractors in turn are constrained by production-linked rates with very small margins.

The focus on productivity at the expense of worker health and overall safety is a short sighted goal that is unsustainable, as evidenced by the increase in accident rates and decline in productivity experienced in the industry over the past decade.

Since the findings of this study and those of other, similar studies about the negative impacts of contracting and the task system were made public, some of the large growers have begun to implement programmes to address the worst of the health and safety risks identified. There is, however, still a long way to go and a need for employers to take much greater responsibility for addressing these risks and threats to forest workers' health, safety and wellbeing.