One of FESA's key stakeholder groups is its Mechanised Harvesting Working Group, which includes contractors and equipment suppliers, and provides a platform for members to get together, discuss and commission work aimed at advancing the efficiency, safety and cost effectiveness of mechanised harvesting. 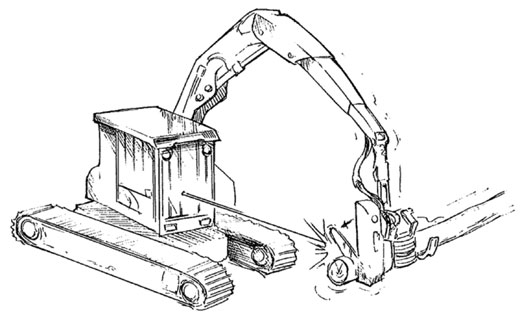 Chain link snapping and being flung off the cutter bar.

Current work being undertaken by the group as requested by the stakeholders includes the following:

The projects mentioned above are still underway, with preliminary results being compiled. This article focuses on some of the preliminary findings of the safety requirements for excavators used in harvesting operations.

Since the introduction of mechanised harvesting in South Africa, the use of 'hybrid' machines has been a factor. In the case of converted excavators, a machine that is designed and spec'd for the mining and construction industries, is being modified and introduced into forestry applications. These machines are now spread throughout the country in a variety of configurations, applications and conditions. It is a concern that legislation regarding their configurations in terms of operator protection is limited in South Africa. The OHS Act is the primary reference point in terms of legal compliance, but its brushstrokes seem too broad for any real standardisation. It basically requires that equipment is safe and well-maintained and without risks as far as is reasonably practicable, and operators who are trained and informed in all aspects of their job. Many companies and organisations have developed their own standards, but even these are not consistent with one another.

FESA does not in any way dictate statutory standards to the industry, but represents an independent research and development body alongside the ICFR which aims, with its stakeholders, to keep South Africa at the forefront of safety, innovation and development. The issues discussed in this article represent preliminary findings as a result of consultation with contractors and equipment suppliers, as well as from sourcing international literature.

It is clear that a 'one size fits all' approach to excavator safety standards in forest operations may not be the best approach. A modified windscreen, for example, which can withstand chain shot (a piece of chain link snapping off and shooting off the cutting bar) may not be necessary or may require different specification for a machine which does not have a bar and chain on the processing head (such as a machine which only debarks). Another example could be the requirement of a reinforced cab top – this may be necessary if the machine is felling trees or loading logs, but possibly not if the machine only processes on roadside, a safe distance from the felling and loading operations. FESA therefore recommends that the following considerations be taken into account before the safety requirements of these machines are defined:

Points to be considered when defining safety regulations for machines

Once the dangers specific to the excavator in question have been identified based on its work requirements, conditions and its configuration, one can begin to consider the following safety features which may apply to the excavator:

A few practical working techniques and principles which can help to further increase the safety of these operations include, among many others:

Some of the requirements enforced in British Columbia relating to excavators in forest operations include the following (www.worksafebc.com):

Additional standards can be found on the International Organization for Standardization (ISO) website (www.iso.org). Recommended ISO standards regarding safety requirements for excavator machines in forest operations include the following:

Please email Glynn Hogg at fesa@icfr.ukzn.ac.za should you require more details or wish to keep abreast with the findings of this or any other of the current projects.

what is the compliance expected cable skidder