Home » A job of choice or last resort

A job of choice or last resort

There was a sea-change in labour practices in the forestry industry between the 1990s and early 2000s. Where previously, forest work was carried out by permanent workers employed directly by forestry companies, over a period of a few years, most forest operations were outsourced to contractors. There were widespread retrenchments and workers were re-employed by contractors on fixed term contracts. 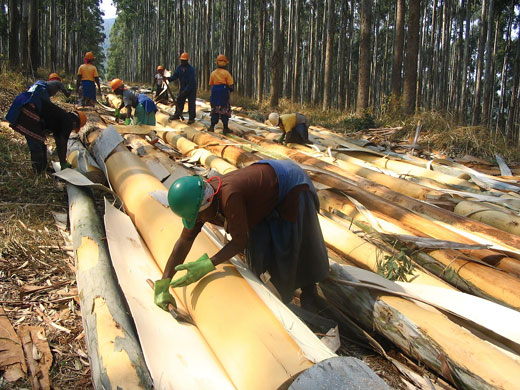 Labour outsourcing had a negative impact on wages and working conditions of forest workers and led to an increase in occupational injuries and fatalities. Over time, productivity declined, labour absenteeism and turnover increased, and the end result was a labour shortage. This 'labour crisis' caused forestry companies countrywide to re-think their labour practices.

A number of interesting labour reform initiatives are underway that go beyond the requirements of the law, and are setting new standards for the industry as a whole.
Labour reforms are however patchy, and there is still a long way to go to ensure that forestry becomes 'a job of choice' rather than one of last resort.

Impact of outsourcing on wages
When outsourcing was first introduced, workers' wages were halved, and in some cases reduced by as much as two-thirds (see the graph). In addition' there were cuts to the 'social wage' as contractor workers did not enjoy the same employment benefits as permanent workers, such as pension funds and in some cases, access to housing, meals and schooling facilities.

The Sectoral Determination introduced a minimum wage for forest workers for the first time in 2006. Section 53(2) of the Basic Conditions of Employment Act (75 of 1997) makes provision for Sectoral Determinations to be put in place to protect workers in sectors not protected by labour unions. After outsourcing, the majority of forest workers were no longer unionised, and it was for this reason that a statutory minimum wage and conditions of employment were required.

The graph shows the impact that the Sectoral Determination has had in raising minimum wages paid by contractors, and especially how annual increments have brought it nearly on par with wages prior to outsourcing, adjusted for inflation.

It is also clear from the graph, however, that the minimum wage is still significantly below the minimum wage paid to the minority of forestry workers who are still fully unionised and engage in annual wage negotiations.

Although the minimum wage was brought in five years ago, in my experience as a social specialist on FSC audits, I find that the following practices are still fairly widespread in the industry, and undermine the intention of the legislation and the sustainability of forest labour.

In some areas of the country, the going wage rate is above the statutory minimum, and non-compliances are rare. In other areas, where there is an oversupply of labour, wage rates below the legislated minimum are sometimes found, and are likely to be more widespread than auditors detect. Most companies, and certainly those that are FSC-certified, carry out annual audits of their contractors to ensure that they adhere to the minimum wage.

A disturbing practice, however, recently came to light during an FSC audit. It emerged that a portion of forestry work is allocated to 'ghost' contractors who are kept off site on audit day and do not appear on the company's lists of contractors. According to hearsay, these contractors violate a number of labour conditions, including the minimum wage. It is not known how common this practice is among certified companies.

The practice of marking a worker absent until completion of the daily task is still very widespread in the industry, including in FSC-certified companies. The Sectoral Determination explicitly outlaws this practice. Managing workers according to task is acceptable, but the practice of withholding a daily wage until the task is completed is not.

There are two main reasons why this practice persists. The first is that the task work system is very entrenched in forestry, and, more importantly, contractors themselves are paid according to production. There are issues here about the way in which companies manage their contractors, and their willingness to negotiate fair and reasonable rates for contract work. The second reason is that contractor compliance audits carried out by companies do not include a mechanism to identify and correct this practice, and it has therefore been overlooked. Internal compliance auditing with this aspect is now more closely scrutinised in FSC audits.

Minimum or maximum?
Companies that have in-sourced labour, or have retained their own labour throughout, are moving to a system of employing labour on fixed term contracts at the minimum wage. In other words, these workers are no better off than those employed by contractors, and it means that the minimum wage is in effect the maximum wage for the lowest paid workers. It also results in a situation where workers are paid different wages for doing the same job, with new recruits earning the legal minimum wage, well below that in the A1 band of the company, and not enjoying the benefits of permanent employment, such as access to provident funds. Discrepancies in working conditions amongst workers in one company are a common source of labour unrest and are not in the long term interests of good labour relations.