In the labour column published in the April 2012 issue of SA Forestry magazine, some of the key findings of ergonomic studies carried out on forestry workers were presented. The authors of these studies suggested that the task system is partly responsible for many of the detrimental effects found; for example, that workers were less inclined to take the rest breaks they need to recover from strenuous activities, and less inclined to stop work to drink water, leading to dehydration. These in turn could lead to higher accident rates and an increased risk of chronic injury. 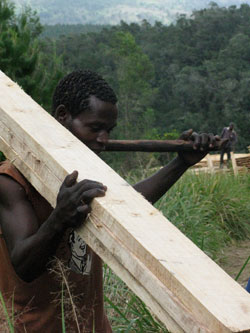 The task system has also been implicated in low wages paid to forest workers, in particular, the practice of withholding pay until tasks are completed. During the recent review of Sectoral Determination 12, Forestry Worker Sector (SD 12), the review team investigated concerns raised by workers and unions and heard views of employers on the task system. After careful consideration, the team recommended not to change the existing provisions of the Sectoral Determination. This means the task system remains legal, on condition that wages do not fall below the SD minimum. This effectively outlaws such practices as requiring workers to complete tasks the next day without pay, and marking workers absent for not completing tasks.1

Given that the task system remains the basis of forest work countrywide, how seriously have concerns over its detrimental impacts been taken? To what extent is the task system still resulting in workers earning less than the (already low) minimum wage? A survey was carried out among a sample of medium growers in KwaZulu-Natal and Mpumalanga in February and March 2012, and the findings provide some answers to these questions. The survey formed part of the investigation of working conditions in the industry commissioned by DAFF.

The survey found that growers and contractors use a variety of different systems to discourage absenteeism and encourage greater productivity among their workers. The table on the next page summarises the different systems in use and their relative prevalence among this sample. 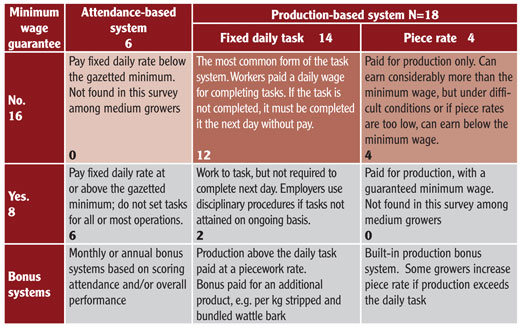 (N=24) Numbers in the table indicate the number of employers who use this system. Although only 19 employers were interviewed, some of the sample appears in more than one category because they make use of more than one system for different operations.

Some growers use a combination of these systems for different job types or operations, and distinctions may not always be clear-cut. For example, growers may combine a task system for cutting wattle poles with a piece system for stripping and bundling wattle bark. Over and above the daily rate paid for cutting poles, workers can earn extra per kg of bark stripped and bundled. This can double their monthly earnings, but only during wattle bark stripping season, 27 weeks during the year.

Discussion
The survey supports other findings that the task system is very widespread throughout forestry, and remains the dominant approach used to manage work and increase productivity.

There are a variety of ways in which employers manage worker attendance and productivity, based on one, or a combination of, attendance-based and production-based methods, with or without additional incentives and disincentives. Production-based systems make use of the task system and the piecework system.

On the positive side, the production-based systems are more flexible than attendance-based systems, and if combined with a bonus system, enable workers to earn considerably more than the minimum wage. Workers can opt to leave work early when their task is complete; often an important consideration for workers who rely on additional income sources such as crop and livestock production or informal trading.

Of concern is the finding that of those practicing production-based systems, the majority  (nearly 80%) do not guarantee a minimum wage, as required by SD 12. Boxes shaded red in the table are those that are illegal in terms of SD 12. The depth of shading denotes how common these practices were in the sample. The most common is to pay workers a set daily wage, or shift rate, for completion of a given task. If not completed, the task can be completed the next day, but the worker will only be paid for one day.

A variation of this is where workers are marked absent on days they do not complete their tasks, and are not paid for that day.

A piecework system without a minimum wage guarantee is less common, but examples of this were also found. The piece rate is calculated based on the task rate, and therefore if production is less than the task, payment falls below the minimum wage if there is no minimum wage protection in place. The normal rate of pay of all employers in the sample did not fall below the SD minimum. This was true for attendance-based and production- based systems.

The main concern, therefore, is not with compliance with the minimum wage per se, but the eroding of the wage through the task system and piecework systems. This is not restricted to medium growers but remains widely practiced throughout the industry, particularly among contractors, who themselves are subject to tightly coupled productivity-linked pay rates.

What needs to be done to address the problem? Clearly, the outlawing of the practice in terms of SD 12 has not been sufficient. If the costs of punitive task and piecework systems in terms of worker health and safety are as high as has been suggested, should its eradication not be taken more seriously by the industry?

Part of the answer may lie in the task rates. If tasks really are fair and achievable, then workers should be able to complete their tasks and the problem does not arise.  But, on the other hand, if task rates are fair and achievable, would the need for a punitive system not largely fall away? Many employers make use of a bonus system already, and it is a small step to rely on this alone to promote productivity, and drop the punitive practice of requiring workers to complete their tasks the next day without pay.

Comments and suggestions from readers would be most welcome, and if forthcoming, will be reported in a subsequent column.

Thanks to Dave Dobson who assisted with interviews and commented on earlier drafts of this article. The research was funded by DAFF as part of a survey of working conditions in the forestry sector.

1 The full report of the review of the Sectoral Determination 12 can be accessed online at: www.labour.gov.za/.../sectoral-determinations/.../Forestry%20Sector%20Report%202011%20final.doc -