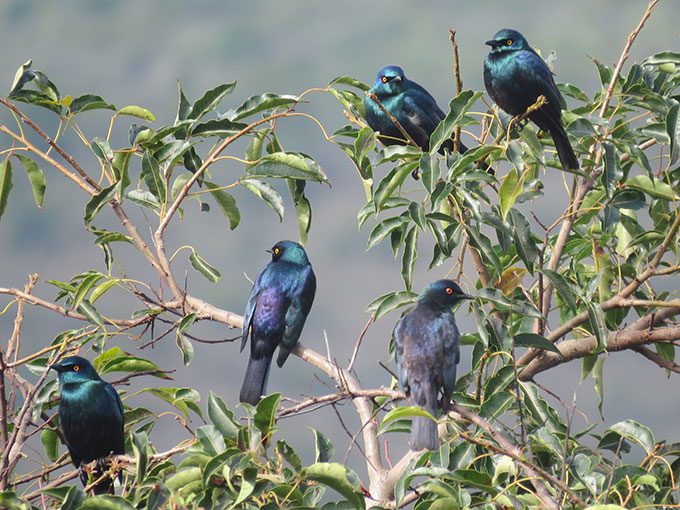 This is the first in a series of articles to be published in SA Forestry Online by DR GARETH COOMBS, focusing on the propagation of indigenous trees and indigenous forestry.

Vepris lanceolata, or white ironwood is one of a few spectacular evergreen forest trees within the Citrus family including others such as the Cape Chestnut (Calodendrum capense), Sneezewood (Ptaeroxylon obliquum) and the Knobwoods (Zanthoxylum spp.). This species has a very wide distribution consisting of an approximately 150km wide band along the coastal belt, starting from Swellendam to KwaZulu-Natal. Beyond KZN, its distribution extends further inland in Northern Mpumalanga and Limpopo province. This species is relatively cosmopolitan in terms of its occurrence and is found in several different vegetation types invariably associated with thickly wooded or forest habitats, although it grows happily on its own as well. It appears to prefer relatively sandy soils. Its growth form forms an impressive upward expanding canopy, but this depends on its growing environment, as can form different canopy shapes when grown singly when it will often start branching laterally at lower heights. The same can often be seen in wild setting where individuals on the edge of the forest branch laterally lower down. An interesting feature of Vepris lanceolate is that in deep forest where trees compete for shade, ironwoods will often have tall very straight trunks that are mottled with blotches of white, grey, rust and pink on a duller grey/green background. This species is an evergreen, with trifoliata leaves and very attractive wavy edges, and carries its beautiful lush green canopy throughout the year.

White ironwood makes an ideal garden tree for several reasons, the first being that they are evergreen and leaf drop is quite low, thus making them suitable to plant in small gardens, pavements and near swimming pools. Large trees make excellent shade trees and also attract a diversity of birdlife particularly thrushes, starlings and African olive pigeons that eagerly consume the dense clusters of smaller black fruits. The root system is not very invasive and they can be safely planted in close proximity to houses without damaging the infrastructure. This species is moderately fast growing and with the correct irrigation fertilization they will reach several metres in height within a few years. This species also undoubtedly has a high potential to be used for indigenous forestry purposes. 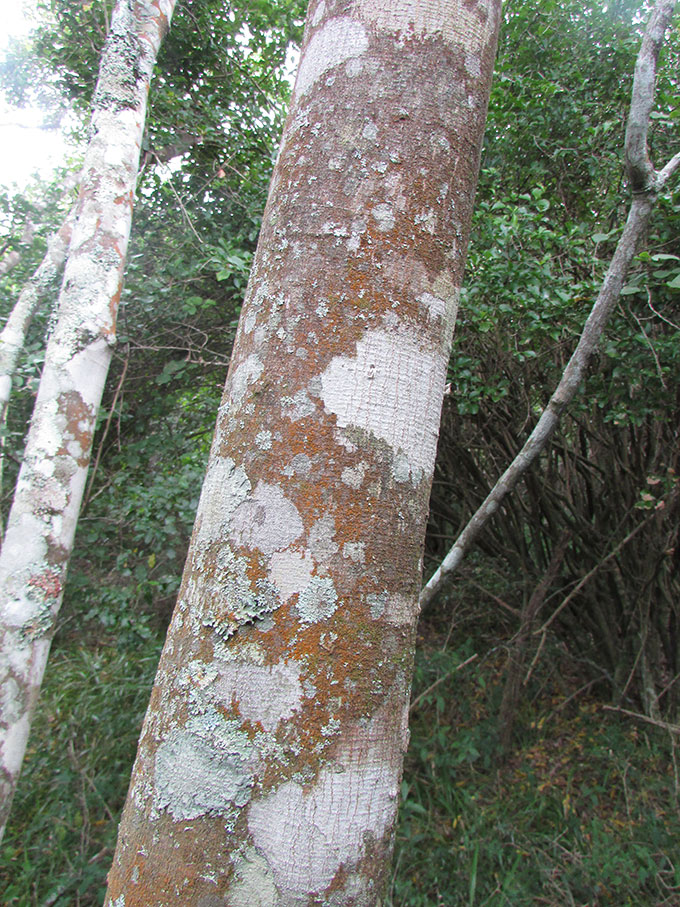 Collecting fruits and seeds
White ironwood is a summer flowering species and can flower at any time from mid-summer to early autumn (December to March) when it produces small, relatively inconspicuous yellow green flowers. Male and female flowers are carried on different trees. Flowers are visited by a variety of insects including honeybees and different fly species. Fruits ripen in early summer (September to October) when they start from small, inconspicuous green fruits borne in dense clusters at the tips branches. Ripening fruits change from green to a darker black colour and have a strong citrus scent when crushed between the fingers. Once ripe, large numbers of fruits can be easily harvested from low hanging branches, or by using a simple ladder to reach higher branches. It is difficult to pick fruit by physically scaling the tree as these are borne on the tips of the branches and difficult to reach from a position within the canopy. Although the wood is generally very strong, care should be taken not to break the branches in an attempt to collect seeds. 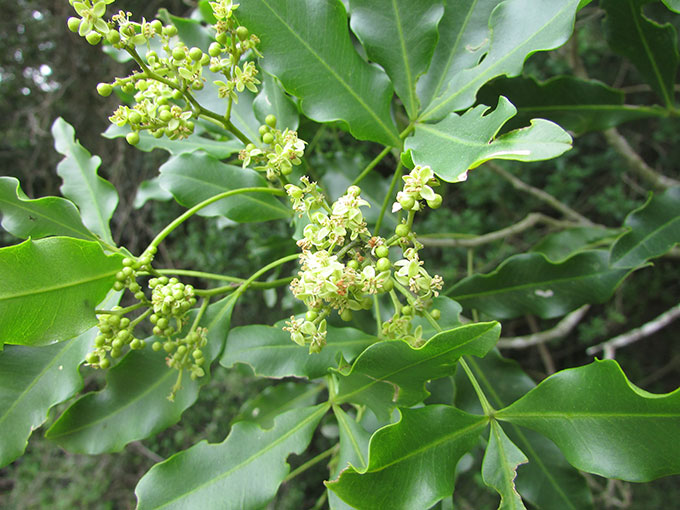 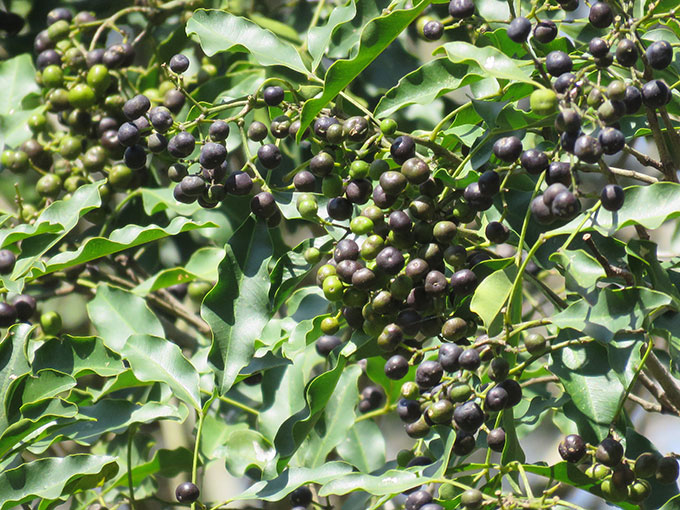 The ripe fruits of white ironwood are born in clusters on the tips of its branches.

Once fruits have been collected, seeds can be extracted from the fruit either by splitting the ripe fruits open by hand and then washing them off in a small amount of water. This is easy to do by squashing the fruit between the thumb and index finger or any other device that achieves a similar action without crushing the seeds within. The skin of fruit should ideally be removed. It is easiest to first split a number of fruits and then wash them off.

Planting seeds and propagation
Following harvesting and cleaning, seeds must be sown in germination trays that should be 15cm or deeper to allow root expansion of the young seedlings. The seedling of this species have hard, non succulent stems and differ from some species such as Cape plum in that regard. From a practical point of view, it is much easier to sow seeds in large seeding bags, seed beds by sowing seeds on the surface of the soil and then cover these with a layer of planting substrate. The seeds should only be covered slightly with a layer of soil approximately 5mm thick. Soil must be kept moist throughout the germination period which can be variable. The germination period typically varies between 35-50 days. Using sub irrigation by placing seedling trays in water is often ideal in avoiding disturbing the top soil with overhead irrigation. Germinating seedlings have thin bright green stems and two opposite green leaves (technically cotyledons at this age). 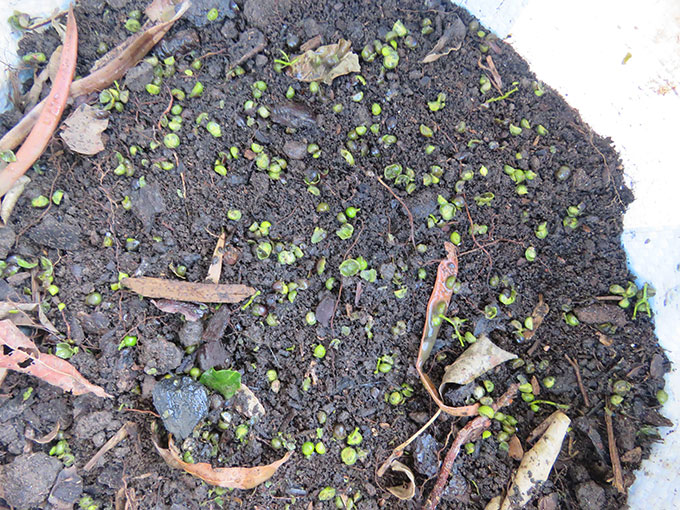 Sowing seeds of white ironwood in a planting bag.

Seedling care and planting out
Newly germinated seedlings are drought sensitive and must be watered regularly (2-3 time weekly). The same precaution should be taken with older seedlings and saplings as these are easily killed by prolonged drought. Seedlings should be kept in shaded conditions. Shade can be provided naturally, either by keeping sowing trays in dappled or permanent shade under large garden trees, tree groves or artificially, through the provision of a growth area covered with shade cloth cover of at least 40%. Planting trays should ideally be checked a few times each week to determine if the soil remains moist enough, particularly during very hot weather conditions. The first true leaves are produced within four weeks of germination (see image below). Small amounts of liquid fertilizer can also be given once a month or more regularly if desired. Caterpillars, particularly those of the Citrus swallowtail (Papilio demodocus) can cause extensive defoliation and seedling trays should be monitored to control any severe infestations. 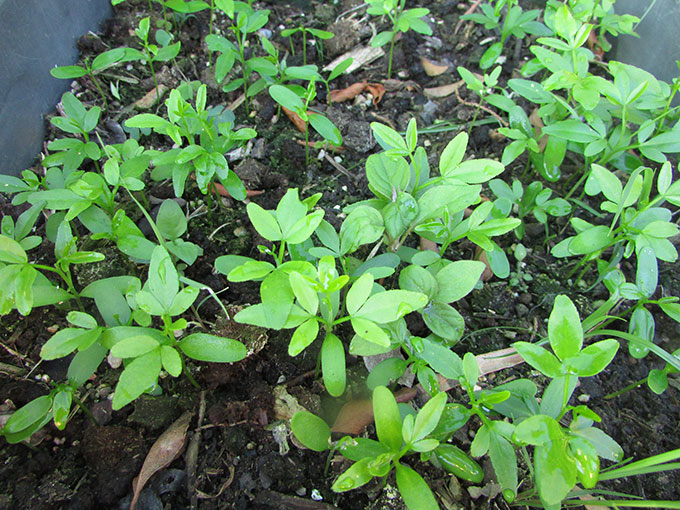 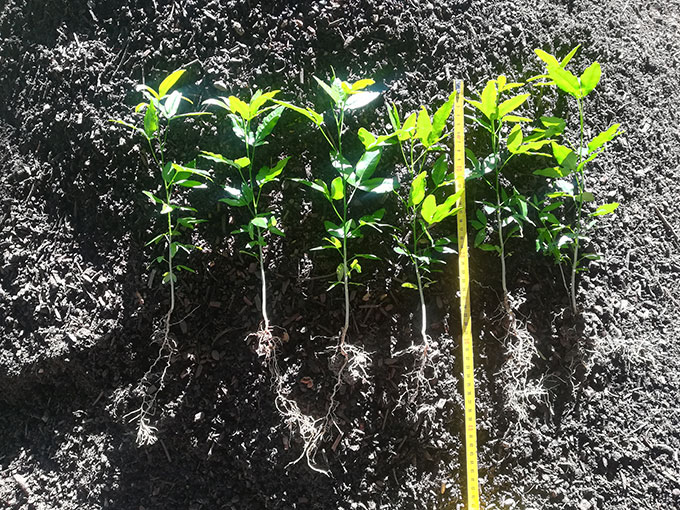 This is a moderately fast growing species, seedling will reach about 20-30cm after a year and thereafter increase steadily in size, reaching about 1.2m in three years. This tree initially grows tall and high, with the stem of the tree remaining thin in its first few growth years. Experimenting with different irrigation and fertilizer application could produce a faster growth rate. Due to this species being a forest tree, they can tolerate a variety of light conditions, however very young trees prefer dappled shade. 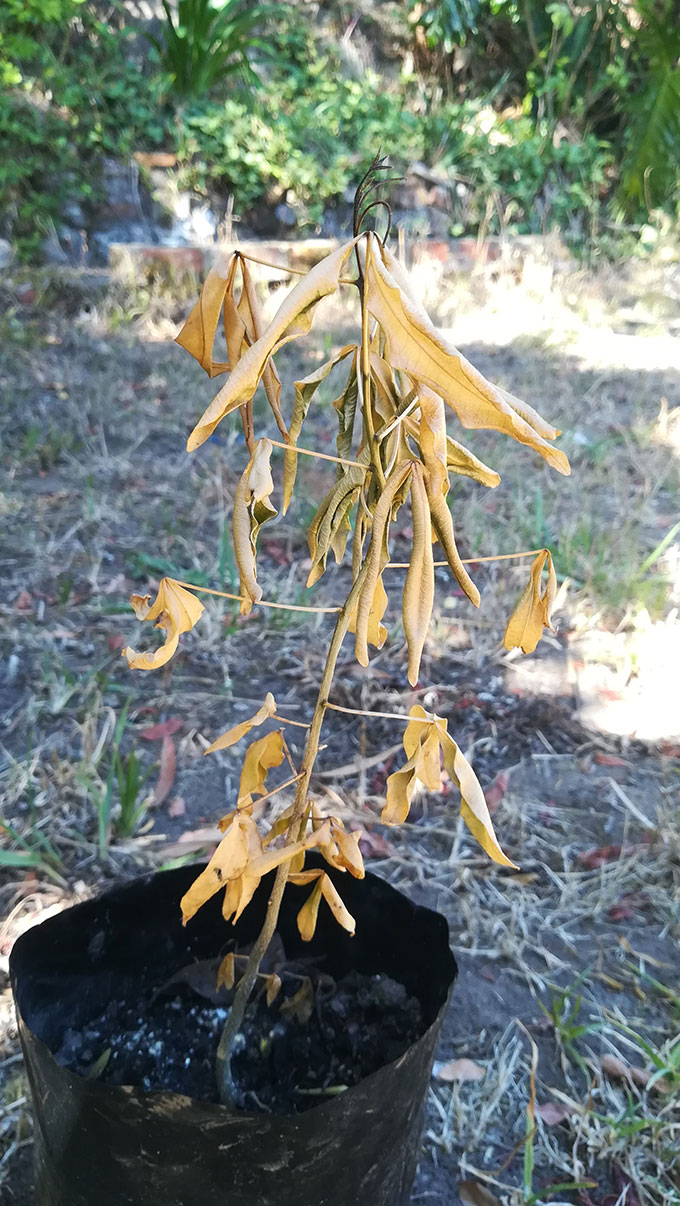 A seedling of Vepris lanceolata that has succumbed to drought. 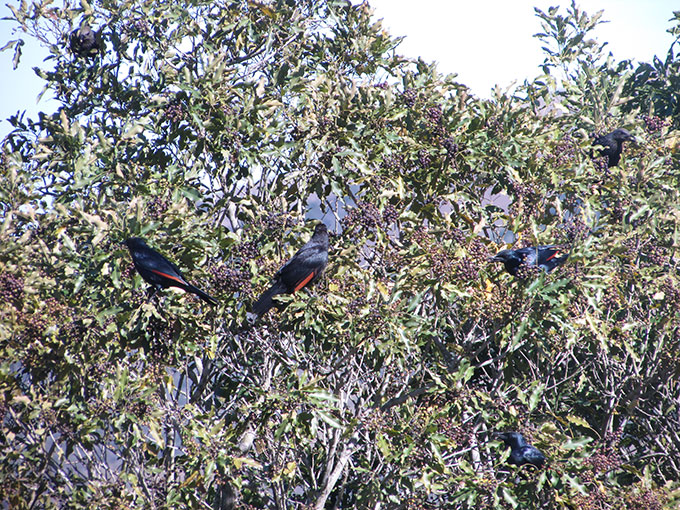 A group of red-winged starling visiting the fruits of Vepris lanceolata.

Natural history notes
In its natural environment, it is a very important component of the forest community as it interacts with a variety of fauna that use this species as a food source. The ripened fruits are heavily eaten by certain fruit eating birds, particularly species such as Black bellied starlings, Red-winged starlings, African Olive pigeon, Olive thrush and the Cape white-eye. Flocks of starlings will repeatedly visit the same fruiting tree and help to disperse the tree seeds by defecating the seeds out in other areas. Unlike the fruits of milkwood (Sideroxylon inerme) the seeds of these species do not have a sticky mucous substance that help them attach to a growing substrate and once they have been excreted, seeds rely on naturally falling through the floor cover until they reach suitable germination media. At least three species of butterfly larvae are reported to use this species as a host plant, the most striking being the Citrus swallowtail, Papilio demodocus.

Other noteworthy interactions include that Cape porcupines will often consume the bark of trees, gnawing the bark off at the base of the tree. This can be obvious in larger trees where large sections of the bark is removed from the base and exposed roots. This is often sever enough to effectively ring bark and kill the tree. Many trees do however resist and survive the damage by regenerating the bark in wounded areas. 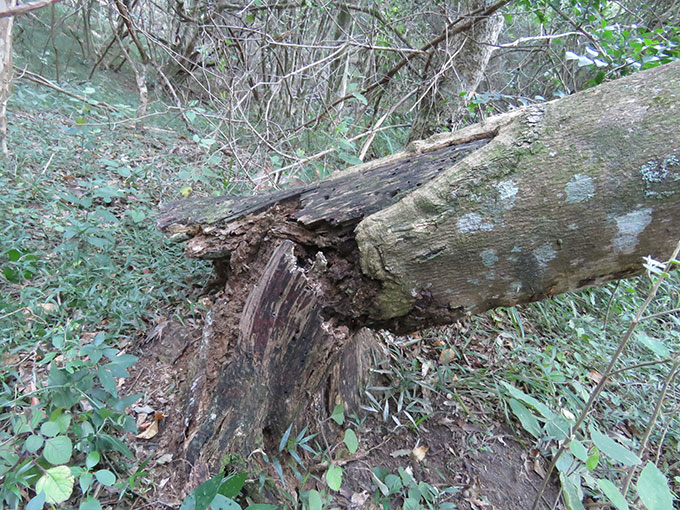 An ironwood that was eventually ringbarked by porcupines.

Dr. Coombs is an environmental consultant and writer based in Grahamstown. He has a PhD in Botany from Rhodes University in Plant Ecology, and has been planting and propagating indigenous trees in his home nursery for many years. For more info, contact Gareth on coombsgareth@gmail.com.

Related article: Ramping up the planting of endangered pepper-bark trees

Thanks so much for this helpful article, Gareth, as I've planned an Ironwood in a pot on our patio for shade in a small townhouse garden, next to a farm with incredible birds life, in Beacon Bay, East london. I was told the ironwood kills any plants next to it.... Is this true? As i have it in a pot, next to the Wisteria, I've struggled to grow....