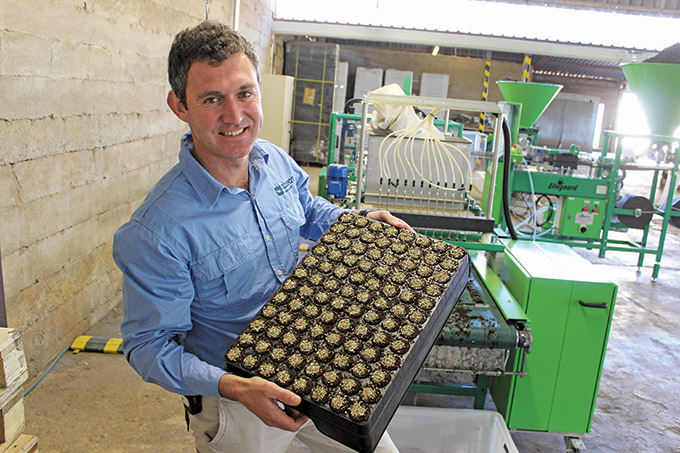 Shaun Biggs with the specially designed tray loaded with Ellepots.

We’ve all seen those little plastic seedling inserts scattered around planting sites and nurseries, or the piles of polystyrene and plastic trays that are used to transport seedlings and cuttings to plantations around the country. They are difficult to collect and clean up for re-use after planting, are easily broken and discarded, and are extremely unfriendly to the environment.

Well, those days will soon be gone, at least for Ixopo-based Sutherland Seedlings, where the biodegradable Ellepot system is being introduced. This system uses FSC certified paper pots to grow seedlings and cuttings in, which simplifies the logistics of getting plants from nursery to field, simplifies and speeds up the planting process, and biodegrades naturally, leaving no mess behind.

Shaun Biggs of Sutherland Seedlings is convinced that the use of biodegradable Ellepots will revolutionise the nursery industry in South Africa over the next few years, not just for forestry but also for the vegetable, fruit and nut and landscaping industries. So much so that Sutherland Seedlings is now the partner for Ellepot SA, and will be selling and supporting the Ellepot system throughout southern Africa. 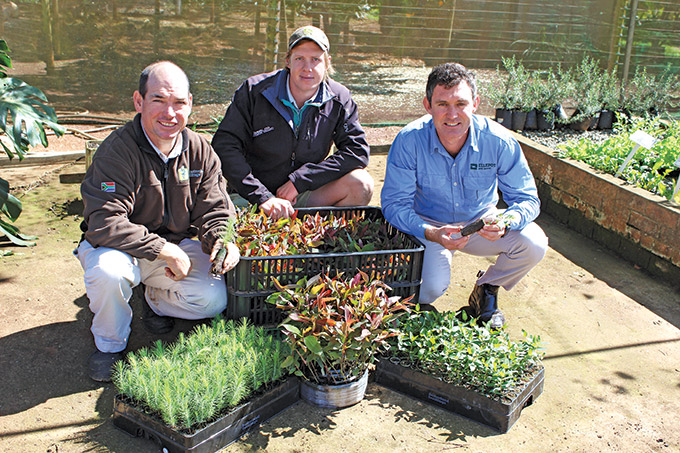 The Sutherland Seedlings team (L-R) Nursery Operations Director Phillip Ashton, Production Manager Warren Humphries and Shaun Biggs. The photo shows the Ellepot handling trays (front left and right), and in the centre a bunch of Ellepot seedlings wrapped in pallet wrap, ready for delivery. The bunches are transported to the customer in standard crates (centre back).

Ellepot is an integrated system that includes the nursery machinery, biodegradable paper for the Ellepots and trays that ‘air prune’ the plant’s roots. The paper pot in which the seedling/cutting grows is a simple paper roll, a bit like a fat cigar.

The system was developed in Denmark some 20 years ago and has been widely adopted in the vegetable, landscaping and ornamental industries in Europe, and is now utilised extensively in the forestry industries in Asia and South America. There are other systems that are also based on biodegradable seedling tubes, e.g. the Jiffy system. However Shaun has done his homework and believes the Ellepot system is more cost effective and allows the nursery more flexibility in which growing media they use.

In looking for an alternative to polystyrene trays, Shaun Biggs visited several nurseries in Uruguay and Brazil that are using Ellepots, and visited the Ellepot factory in Denmark. He initially purchased a second hand Ellepot machine just over a year ago, and has been trialing different papers, trays and delivery methods to tailor the system to South African silvicultural practices. 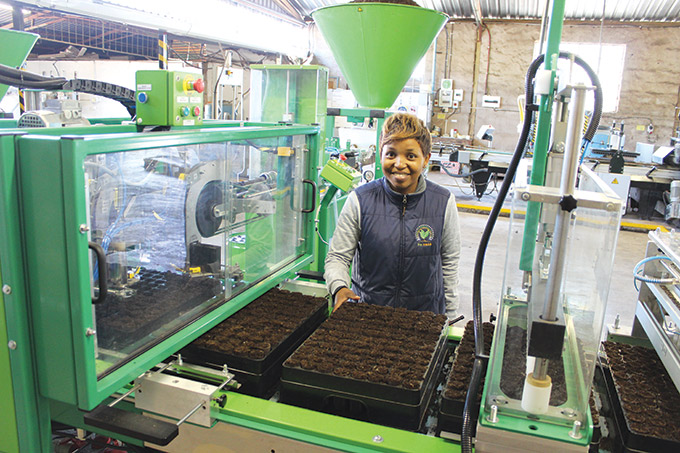 Sutherland Seedlings’ Planting Manager, Yamkela Zongwana, with the Ellepot machine. It is capable of producing 8 000 Ellepots per hour, with diameters from 15 – 50 mm. The operator can also vary the length of the paper pot. Sutherland Seedlings is producing Ellepots that are 35 mm in diameter x 90 mm long for the forestry industry. The plug volume is roughly the same as the traditional model 98 tray.

Sutherland Seedlings has now invested in a second, faster production line and has started delivering plants grown in Ellepots to private growers and forestry contractors.

The Ellepot machines are versatile and can make pots of various sizes, and there are 12 different types of Ellepot papers specially developed for forestry, flowers, landscape plants, vegetables and fruit and nut trees.

The Forestry 12+ paper that Sutherland Seedlings is currently using provides excellent protection for the fragile roots, allows the roots to grow through the paper into the surrounding soil reducing transplant shock, and fully decomposes shortly after transplanting into the soil. 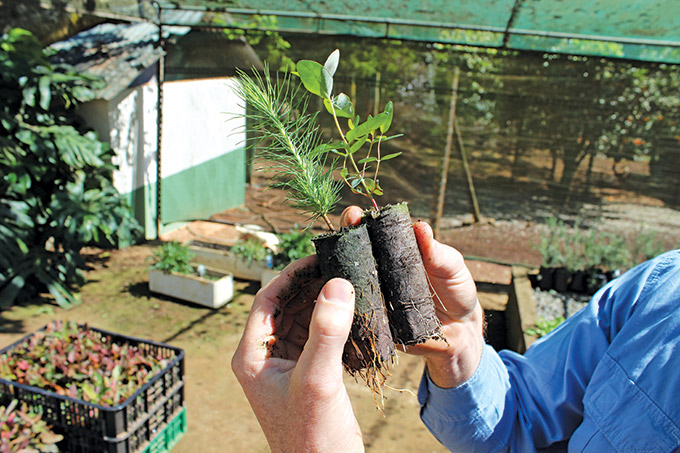 For Shaun, the Ellepot system has three major advantages over conventional systems:-

Logistics
Seedlings or cuttings grown in Ellepots are delivered to the customer in a bundle. Each bundle is wrapped in pallet wrap for easy handling. All you need to do is remove the pallet wrap and pop the plants into the prepared pits. The Ellepot paper protects the plant’s root system during handling, and is well suited to mechanised silviculture. No need to extract a fragile seedling from its temporary home (whether plastic or polystyrene), which allows faster handling by planters, both human and machine.

Best of all, no need to collect up the discarded tubes and trays and return them to the nursery – or be charged additionally for broken or lost trays – after the planting operation has been completed.

The only item that needs to be discarded is the pallet wrap, a significant improvement on the current status quo. The aim is to replace the pallet wrap with biodegradable packaging as soon as the right material for the job has been found.

Shaun noted that with the conventional system, the logistics (and cost) of collecting the plastic/polystyrene trays and tubes was becoming a ‘logistical headache’. The Ellepot system eliminates the problem entirely.

Another advantage is that the ready-for-delivery Ellepot bundles are much more compact than conventional plastic or polystyrene trays, so more plants can be loaded into a vehicle, thus saving on transport costs. By way of example, you can fit  10 000 Ellepot seedlings on a bakkie vs just 2 000 –  3 000 plants in conventional trays.

Shaun’s aim is to move towards a 'Just in Time' delivery strategy where plants aren’t kept in holding nurseries for extended periods. Foresters will order the plants they need for the next 7-10 days, minimizing the time the plants spend in often poor holding facilities. Thereafter there is no need to store empty trays or contact your nursery for a pick up. 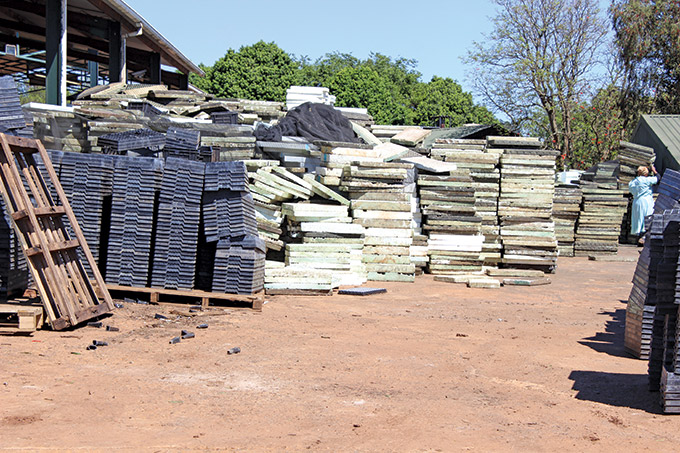 A common sight at nurseries around the country … used plastic and polystyrene seedling trays gathering dust, with a few old plastic planting tubes scattered around. The Ellepot system eliminates the need to use these items.

Plant growth and transplant performance
Seedlings or cuttings grown in conventional plastic tubes or polystyrene trays can easily become root bound, but with the Ellepot system the roots grow through the paper and are air pruned. The roots continue their lateral growth as soon as they are planted in the soil. After planting it takes time for a plant to recover from the transplant shock of being removed from the tube/tray environment, and for the seedling roots to untangle and start growing out into the soil. This delays the establishment of the plant, and can lead to mortalities if harsh weather is experienced after planting.

When grown in the Ellepot system, the plants natural root architecture is maintained, and studies show there are significantly more secondary roots in the root plug. This more balanced root system means faster root growth after transplanting, better uniformity and less problems with wind throw once the trees are established.

Environmental
The plants are delivered in bundles – not in trays, so there is nothing (except the pallet wrap holding the bundles together) to get left behind, damaged and discarded. Damaged plastic/polystyrene trays are sent to landfill, and do constitute an environmental hazard.

The paper used to make Ellepots is imported in rolls, and is certified with FSC for use in FSC certified plantations.

“After 10 or 11 months the paper will start breaking down. The grade of paper you use is key, they have different drying out tendencies. We have chosen the paper best suited to local conditions for forestry,” said Shaun.

Shaun believes that the use of biodegradable paper pots will become the norm in nurseries in South Africa and around the world in the next few years.

“It’s a matter of ‘when’ – not ‘if’,” he believes. “It’s an environmentally friendly solution that more than ticks all the boxes when it comes to transplant performance and logistics.”

Sutherland Seedlings, which currently produces between 10 and 12 million plants per year for the forestry industry (of which 4 million are clonal cuttings), has invested in two Ellepot production lines and has purchased sufficient trays and paper stocks to start rolling out the system to customers far and wide.

Ellepots are also being used in the nursery to grow vegetable seedlings and fruit trees such as avocado’s. 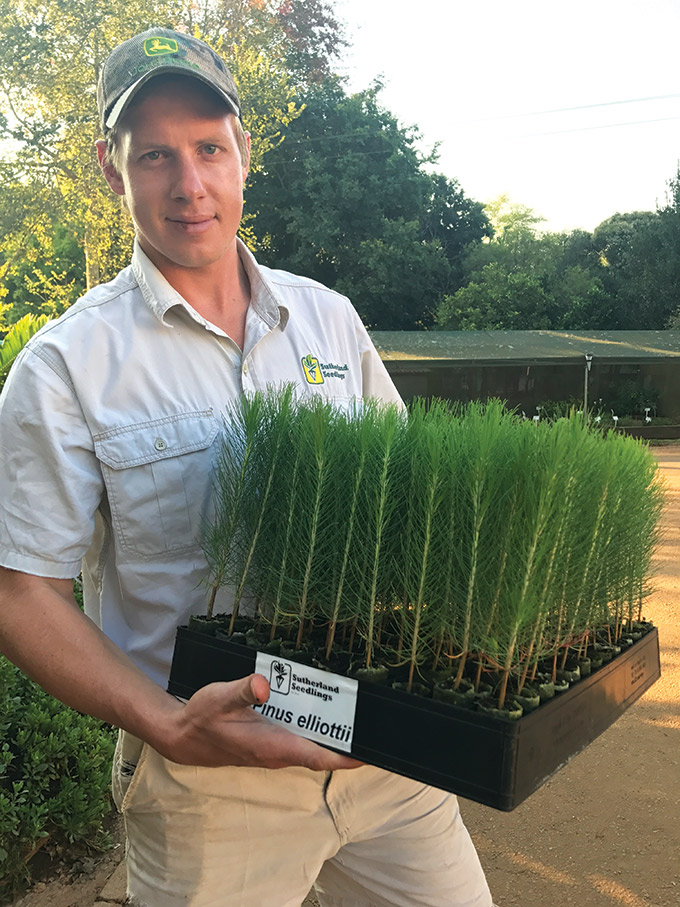