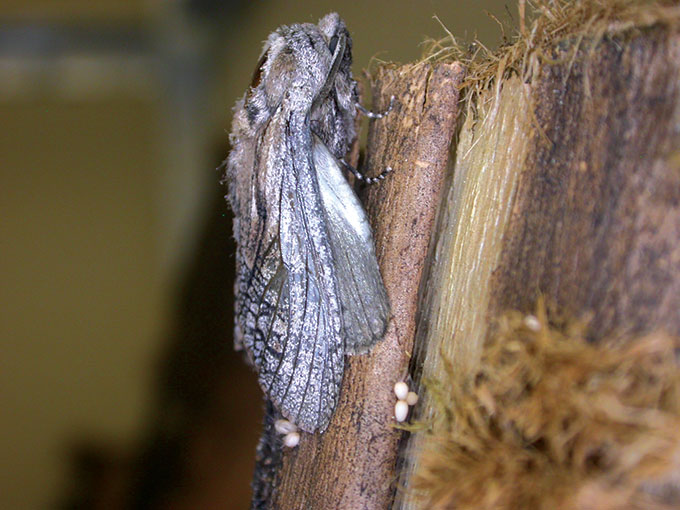 Threats to South Africa’s plantation forestry industry are numerous and diverse. Many people are familiar with the threat of non-native (exotic) pests and pathogens entering the country from abroad. But there are also threats coming from within our very own borders.

When the country started establishing commercial plantation forestry, we imported selections of Acacia mearnsii, Eucalyptus and Pinus species from their countries of origin, leaving behind their natural pests and pathogens. Initially these trees were also free of attack by insects and microorganisms native to South Africa, allowing the industry to enjoy a glorious honeymoon period.

As any married couple will tell you, the peace and quiet does not last - eventually some problems will appear. As South Africa’s native insects and microorganisms adapted to the non-native plantation forestry species over the past century, the industry has started experiencing an increasing number of pest problems. The A. mearnsii industry is all too familiar with problems caused by the wattle bagworm and mirids, and the pine industry with the pine emperor and brown tail moths.

In the mid 2000s a previously unknown pest problem started appearing on Eucalyptus nitens trees in the Lothair area. The larvae of this insect, Coryphodema tristis, also known at the goat or cossid moth, bore into the stems of E. nitens trees, literally devouring the tree from the inside out, rendering the tree much like Swiss cheese. The adult is a medium sized moth (wingspan 2-5 cm), which often lays its eggs on the same tree over multiple seasons, resulting in several colonies of larvae within an infested tree. This may lead to the death of the tree and perhaps even wind breakage due to its weakened structure. Also, the feeding behaviour of the multitude of larvae results in significant volume loss to infested trees, impacting on yield and profit. 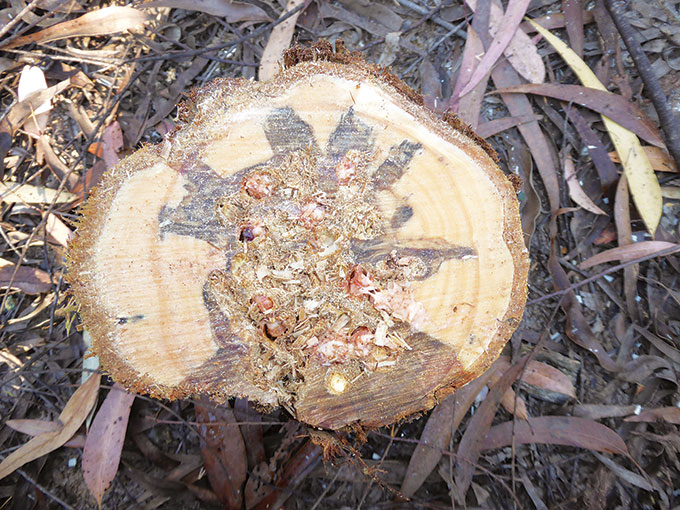 Eucalyptus nitens is an important cold-tolerant Eucalyptus species in South Africa and is widely planted in areas prone to frost and snow. The threat of the cossid moth, and other pests and pathogens, to this species is of concern for as long as no other frost and snow tolerant species are available. Finding sustainable and environmentally friendly management strategies to reduce the impact of the cossid moth is, therefore, a priority. 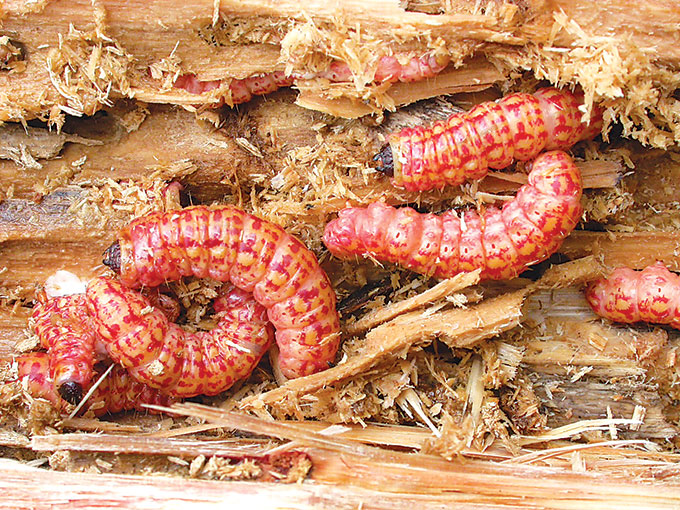 Management of the problem
Native insect pests usually have numerous natural predators that keep their populations in check. However, it has been seen with the cossid moth, and other native pests, such as the wattle bagworm and pine emperor moth, that these natural enemies often do not follow the pest into plantations of non-native trees. This allows the pest to build up huge populations and cause significant damage to their new host trees.

Pest management
Management of insect pests can be achieved via several routes. In the case of the cossid moth, chemical control is not a feasible option, as it would have to be applied frequently (or insecticides with long residual action would need to be used) throughout the adult emergence period to ensure most moths are killed. The use of systemic insecticides which are absorbed by the trees to kill the larvae would be impractical and expensive.

Sappi has embarked on a programme to reduce the age of E. nitens trees in compartments. This allows for the harvesting of trees before they die and for reduced volume loss. However, this still leaves trees open to attack from around five years until harvesting, during which time considerable damage can be caused by the cossid moth.

In 2016, Sappi embarked on a mass trapping exercise to reduce the populations of the cossid moth in E. nitens compartments in the Lothair and Rooihoogte area of Mpumalanga. The management strategy is based on work done by Dr. Marc Bouwer from the Tree Protection Cooperative Program (TPCP) at the Forestry and Agriculture Biotechnology Institute (FABI) at the University of Pretoria. 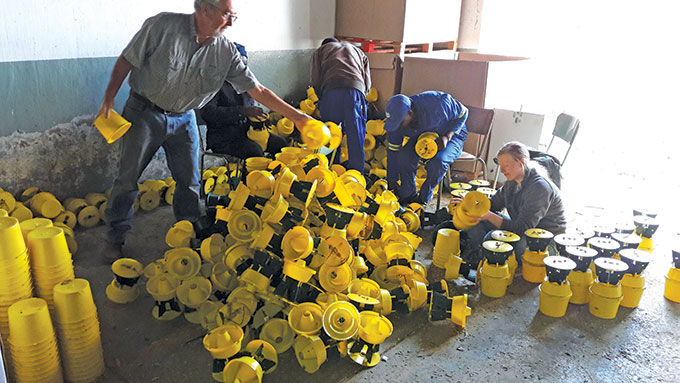 Servicing and assembly of bucket traps for capturing of male cossid moths in 2017 (Photo: Jolanda Roux)

Pheromones
Communication between male and female moths is through chemical signals called pheromones. Each species of moth has its own unique combination of pheromone which prevents males from a specific species from wasting time by searching for females of another species. Male cossid moths are trapped from the environment through the use of these pheromones, thus disrupting the mating cycle of the cossid moth. Because cossid moths are nocturnal by nature, males cannot see the females in the dark, so they find them by their scent.

These pheromones have been synthetically synthesised by Dr Bouwer and his team at FABI.

Sappi’s entomologists, Kayla Noeth and Marcel Verleur (now retired), in collaboration with the TPCP and Marc Bouwer, tested various trap types with pheromone lures in 2015. In 2016, based on results of these studies, Sappi deployed more than 6 400 yellow bucket traps with pheromone lures in its E. nitens plantations in the Lothair area. These traps were placed in compartments with cossid moth infestations during their flight season, stretching from middle September to late December. 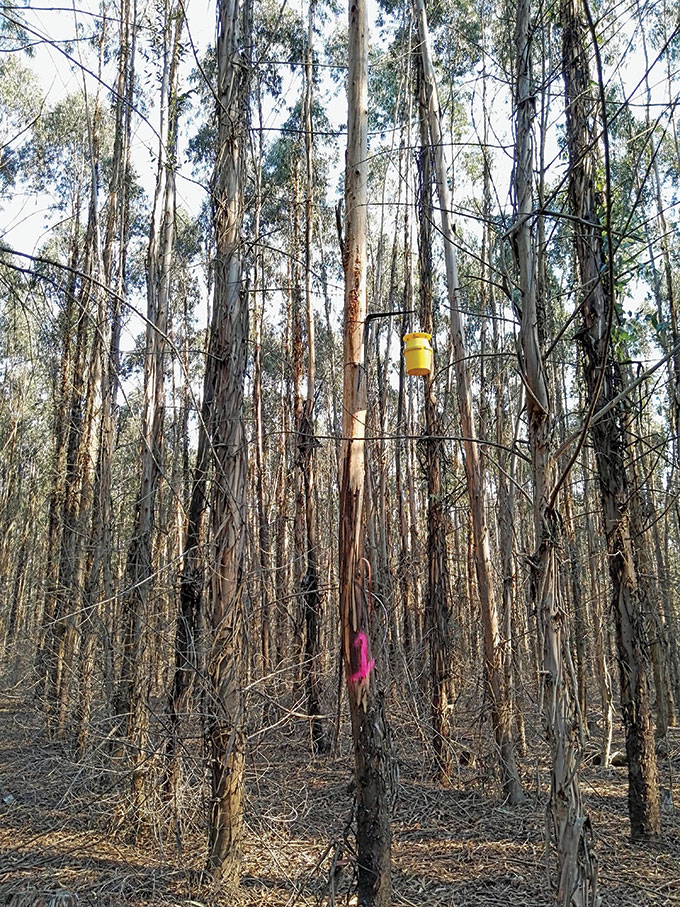 Monitoring and evaluation
Evaluation of the 2016 results, and predictions for future cossid moth populations under the mass trapping programme are promising. At the height of the cossid moth flight season in November 2016, more than 3 500 male moths were captured in one week. With the current trapping programme, the number of new cossid moth colonies per tree is expected to remain the same. With no trapping, colonies would be expected to increase from 1.5 colonies to four colonies per tree.

Based on the success of the 2016 trapping effort, it was decided to repeat the mass trapping of cossid moth males in 2017. Experiments to further optimize the trapping are ongoing, as are plans for other management options to augment the pheromone traps as part of an integrated pest management strategy.

Collaboration
The Sappi supported mass trapping of cossid moths, using a pheromone to attract males, is the largest such programme in plantation forestry. It is also an example of effective collaboration between industry and academia to find practical management solutions to tree health and other problems. 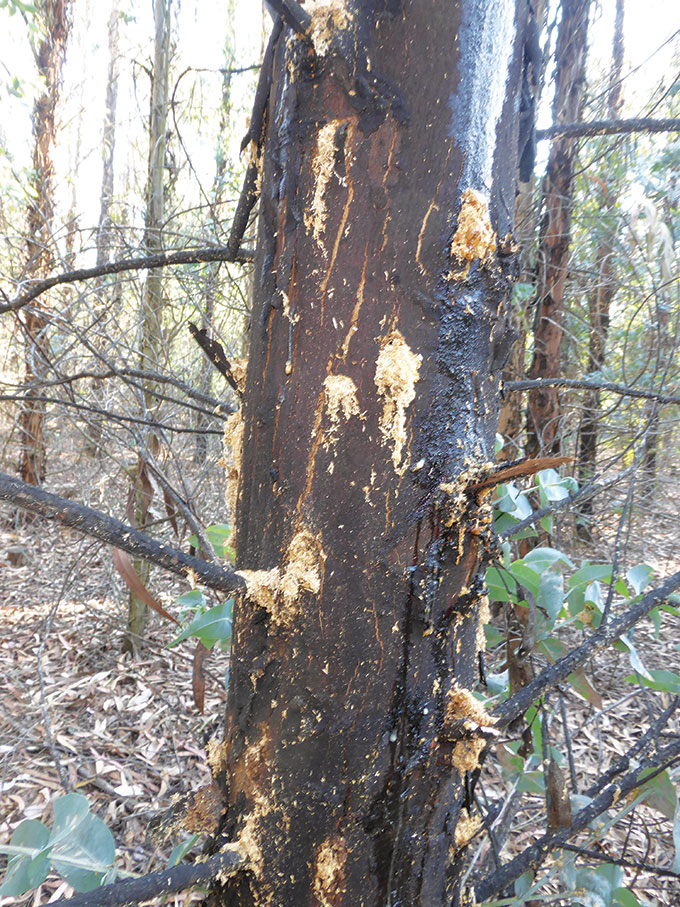 External signs of cossid infestation of a tree – kino and frass exudation as a result of larval tunnelling (Photo: Jolanda Roux). 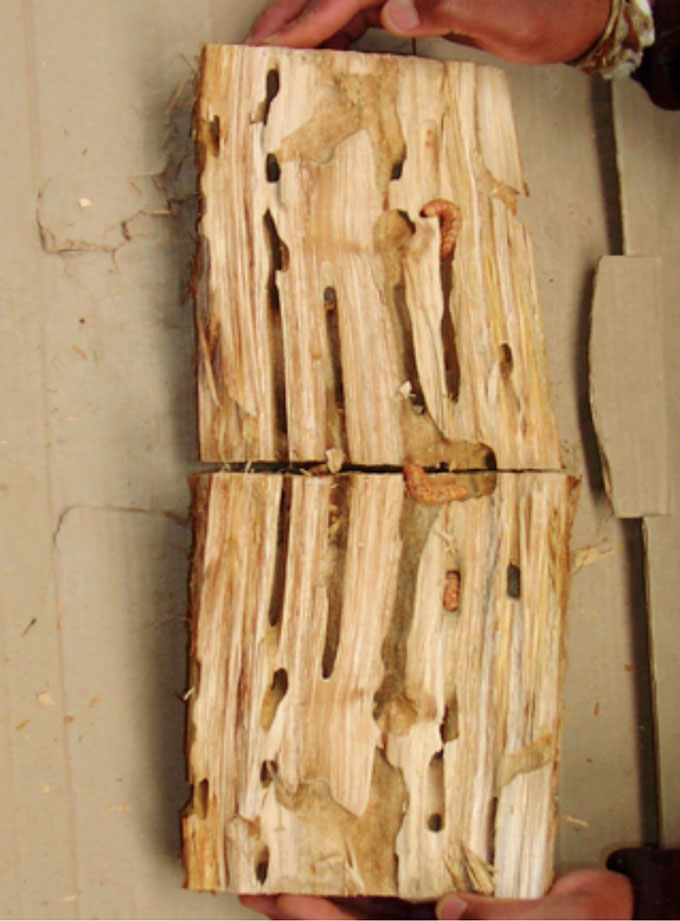 Multiple tunnels in the stem of an infested tree, resulting in volume loss (Photo: Grant Boreham).