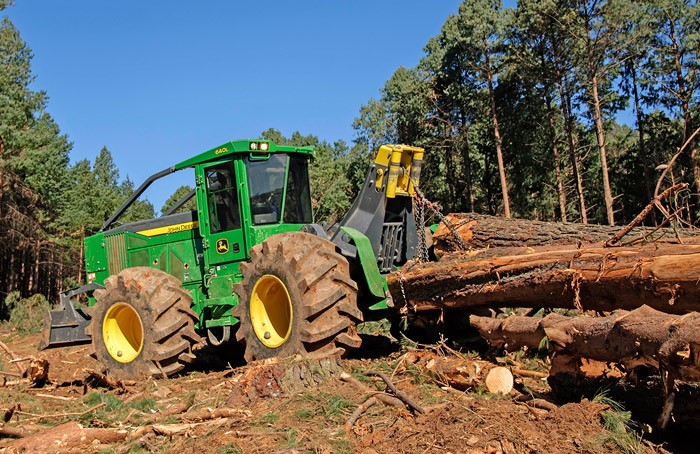 The 640L is one of the new generation John Deere skidders to be introduced into the South African market by Bell Equipment.

John Deere built its first skidder, the 440, back in 1965. Now, celebrating the skidder’s Golden Jubilee, John Deere has launched its brand new L-series skidders of which two models, the John Deere 640L Cable Skidder and 648L Grapple Skidder, get their first introduction to the Southern African forestry market.

The new product line was unveiled in the USA in April 2015 and is now being introduced to Southern Africa, before the machines are launched into the Australian and New Zealand markets.

“This is a completely new skidder, designed and built on a brand new platform, which comes to the market after many thousands of hours of listening to what customers want,” says Simon Shackleton, General Manager Forestry: Asia Pacific, and Africa for John Deere. “It was also designed to keep pace with the emergence of higher-tiered engines and the need to keep John Deere at the forefront of timber harvesting technology, where it is recognized as being a world leader in the field.”

The new machines are packed with new features and improvements, which says a lot as previous models were known to have set the benchmark in their class. Engine capacities and power have been increased and grapples are bigger, both features that are designed to increase productivity and reduce the overall cost per tonne. 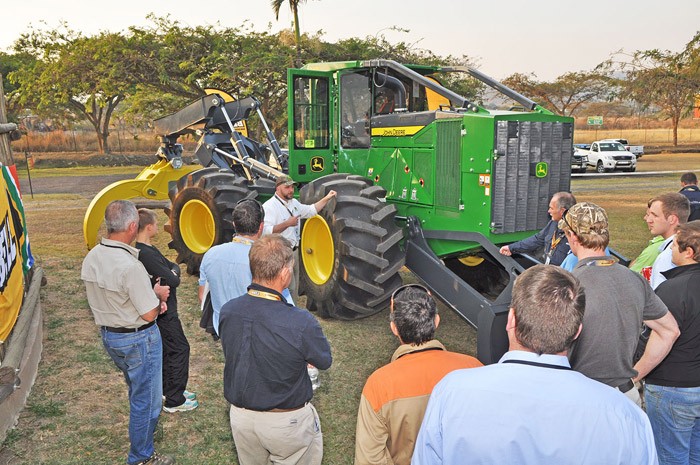 Foresters, contractors and growers get a close-up look at the new John Deere skidder at the field day in Nelspruit.

“The big feature, which points to some innovative thinking by the John Deere designers, is the use of the Continuous Variable Transmission (CVT),” says Brandon O’Neal, John Deere’s Product Marketing Manager. “This easy-to-use CVT transmission combines the smoothness and operating ease of a hydrostatic transmission with the fuel efficiency of a lockup torque converter.”

What this means in practice is that the CVT transmission enables a constant engine speed, thus reducing engine wear while ensuring excellent fuel economy. The system is easy to operate and eliminates “shift shocks” due to surging rpm. Once the maximum speed is set, the transmission does the rest and avoids a hunt for the correct gear.

“The CVT automatically senses the load and delivers the torque and tractive effort that is needed to maintain the desired speed,” O’Neal adds. “Because the engine is running at a constant 1 800 rpm, it enables optimal multi-functioning performance and lower fuel consumption.”

Derek Howe, Bell Equipment’s General Manager: Forestry, Sugar and Agricultural Sales is equally enthusiastic when he speaks of the improvements in the John Deere 640L and 648L skidders.

“Bell Equipment was included in John Deere's customer input process and we were able to give input into the design of this new machine. We are happy to see that the cab on the new machines has been enlarged by at least 25% and is twice as quiet. The ergonomics have been vastly improved with better all-round visibility for the operator, brought about by a rotating seat, joystick steering and a much larger rear window. The greatest impact of the various innovations on the new skidders, particularly the CVT transmission, is the improved cycle times, leading to improved productivity and a reduction in cost per tonne,” said Derek.

He also pointed out that the grapple is much larger and now boasts an opening of some 3345mm, with capacity of 1.48m², which greatly enlarges the load capacity compared to the G & H Series machines. Derek said that with more mechanisation taking place in timber harvesting worldwide, bigger and stronger machines generally mean more cost-effective performance.

“In timber felling and extraction operations, you typically find that a grapple skidder would be used in conjunction with a feller-buncher while a cable skidder would normally be used where hand felling is done,” he says. “To further enhance the multi-tasking role of a John Deere 648L single or dual arch grapple skidder, it comes standard with a winch and can accommodate a combination of winch and grapple to add to the machine's versatility.”

The Southern African launch of the L-series John Deere skidders was held at the Kwanyoni Lodge near Nelspruit in July. Current and prospective owners of John Deere skidders and other timber harvesting equipment were there to get first hand information from the knowledgeable John Deere and Bell Equipment personnel at the event.

One of them was John Rance (Jnr) of Rance Timber near Stutterheim in the Eastern Cape. Rance Timber is awaiting the delivery of a new John Deere 640L cable skidder.

“We currently run five John Deere 540 cable skidders of which the older two have done in excess of 10 000 hours, and the newest one around 2 500 hours of service,” said John. “Our harvesting management has, with assistance from Derek Howe, successfully reduced our harvesting teams from eight to five over the past two years. We believe that with the new John Deere 640L cable skidder added to our fleet, further cost savings and improved productivity is imminent.” 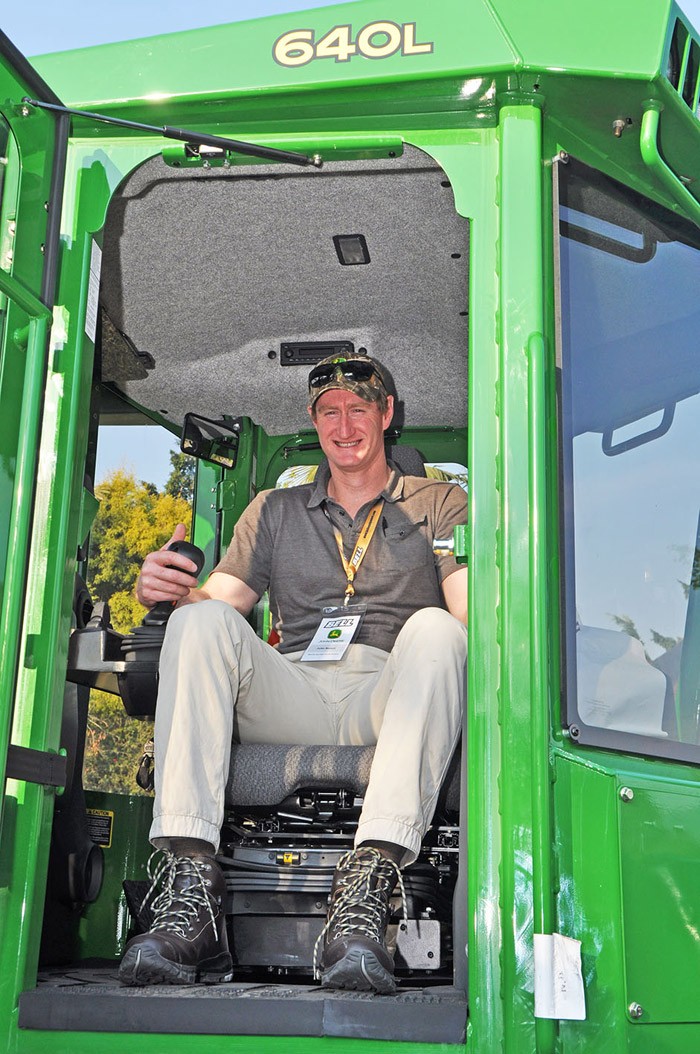 John Rance from Rance Timbers in Stutterheim at the controls of the JD 640L Cable Skidder.

Some of the outstanding features the new John Deere 640 and 648 L-Series machines bring to the market are:
• Continuous Variable Transmission (CVT) which provides maximum pulling power at all speeds with unmatched fuel efficiency.
• More robust, heavy-duty axles with continuous lube system which improves durability and extended life.
• Grapples are larger and cover a wider area.
• The new cab is 25% larger and twice as quiet.
• The rear window is 75% larger.
• Armrest-mounted controls, joystick steering and an optional rotating seat provide smooth, low-effort operation and reduce operator fatigue.
• Higher horsepower 6,8 litre diesel engine, which runs at a constant speed, boosting performance and dependability while reducing component wear. Tier II emissions rating will be the standard engine supplied for the local and other international markets outside North America and Europe.
• An independent axle diff lock allows the operator to engage all four wheels or just the front or the rear as needed.
• Straight bushings at all grapple, arch, boom and blade joints deliver longer life.
• Grease-through pins ensure even lubrication and are more resistant to dust, rust and debris.
• The beefier roller-bearing articulation joint has been updated for longer life and boom-arch hoses have been rerouted inside the arch where they are better protected and can be easily accessed for faster repair.
• The number of switches and relays has been reduced and diagnostic software makes troubleshooting easier for the operator, machine owner and dealer. 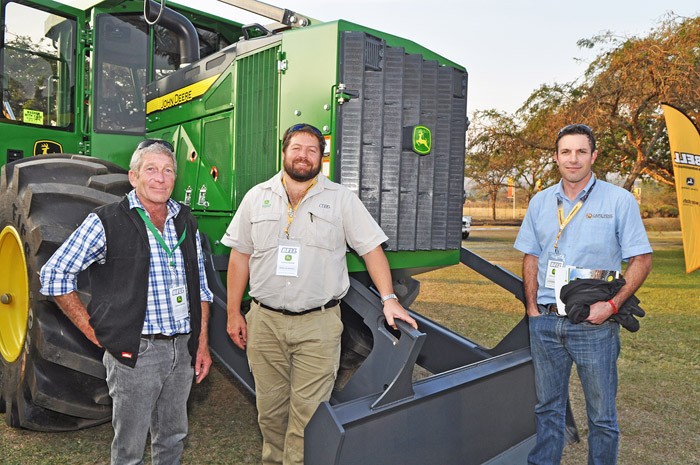 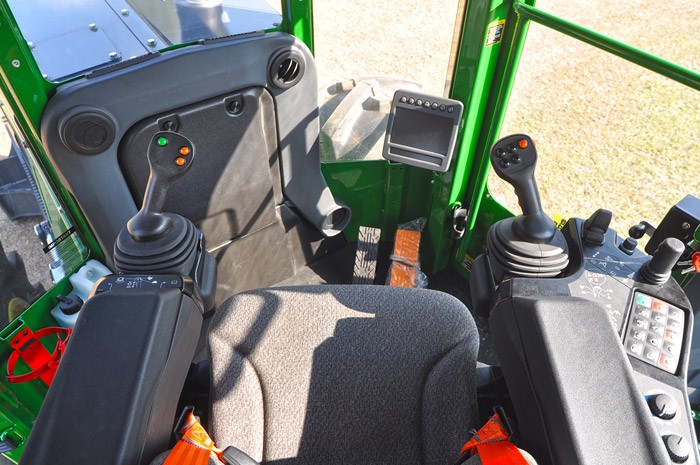