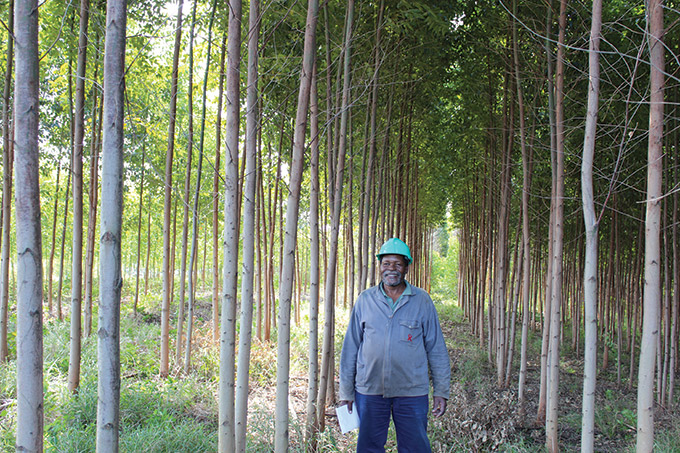 Small-scale timber grower Mdumiseni Msomi is NCT’s Farmer of the Year for 2016 in the category of farms managed on communal land.

Mdumiseni manages 10 ha of land surrounding his homestead in Mankwathini, which is located some 15 kms from Richards Bay.

He is a self-taught timber farmer who has learnt from practical experience as well as from advice and assistance he has received over the years from the NCT forestry team. He has been a full member of NCT since 1995.

Mdumiseni left school after completing Grade 5. In 1976, at the age of 19, he was allocated a piece of land within the family homestead by his parents and decided to establish a small timber plantation. He got permission from the local government forestry office to collect seed from some of their mature gum compartments. He germinated the seed in seed beds and transferred them to home-made trays made from pallet wood before planting them out.

After his father passed away, the whole 10 ha of land around the homsestead was transferred to Mdumiseni. He expanded the gum to around eight hectares, with the balance of land planted to maize and vegetables.

First impressions of Mdumiseni’s farm is of extremely well laid out compartments that are neat and free of competing vegetation. He proudly showed SA Forestry around, explaining the logic behind his silviculture methods and species selection.

He employs five people on a seasonal basis to help with weeding and harvesting, but does all the rest of the work himself, including pitting, planting and coppice reduction operations. 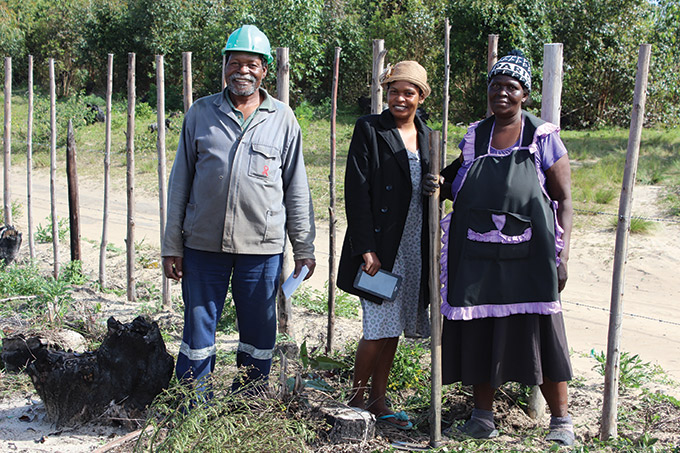 Mdumiseni with his daughter Nokutula (centre) and wife, Mavis. Mavis is busy weeding this field which has been planted with C.henryi, so that she can plant a crop of beans in between the growing seedlings.

He ploughs the land before planting and removes competing weeds by hand. He gets free seedlings and hydrogel through NCTs Project Regen, and plants during the coolest months of the year (April to August).

He has recently been planting C. henryi which is performing exceptionally well in Zululand coastal areas, rather than the G x U clones he was planting previously as they have been hit hard by L. invasa.

When Mdumiseni noticed that there were insects damaging his C. henryi seedlings, he came up with an innovative solution. He cut the bottoms off plastic cooldrink bottles and planted the seedlings inside, thus protecting them from attack. As soon as the seedlings are well established he cuts away the plastic containers and removes them from the soil, allowing the trees to continue growing unhindered. 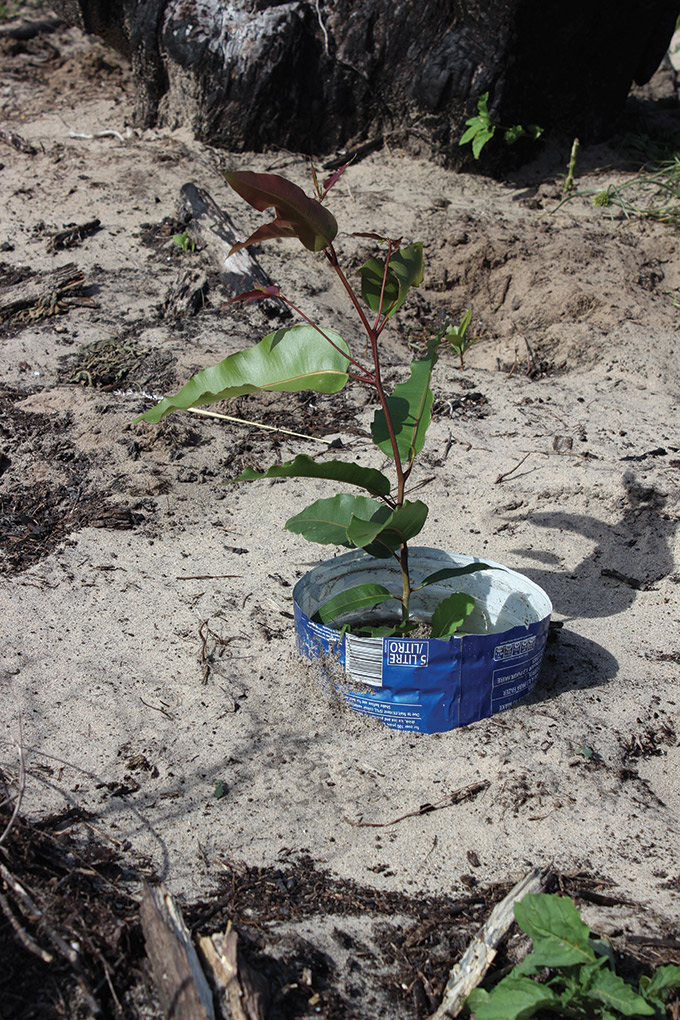 C. henryi planted in a plastic bottle with the bottom cut out, to protect it from insect damage … one of several innovations introduced by Mdumiseni Msomi.

His wife plants a crop of beans in between the newly planted tree seedlings, a practice that is common among many small-scale tree farmers in Zululand. The beans provide an opportunity to take advantage of a well prepared and weed-free environment to grow a food crop, which has the added benefit of fixing nitrogen in the soil and boosting the growth of the trees. 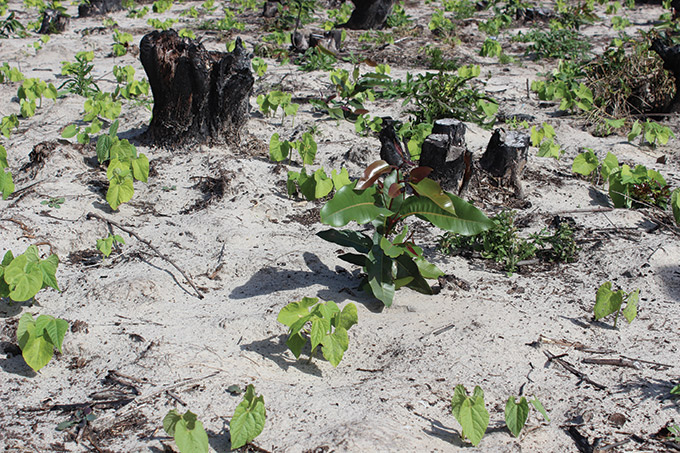 Beans growing between the C.henryi seedlings. The beans will provide food for the table, help to keep the weeds at bay and fix nitrogen in the soil.

His farm is surrounded by a sturdy home-made fence that keeps thieves and cattle out. All the fence poles are sourced from his own plantation.

There is a sand road around two sides of his farm that serves as an effective fire break. He has had a few small fires, but nothing major.

His harvested timber is hauled the short distance to NCTs mill in Richards Bay by local transport contractors.

Mdumiseni says that forestry has provided him with a livelihood to raise his family and educate his five children, and has significantly improved his standard of living. Two of his sons are currently enrolled at the University of Zululand.

Before joining NCT he was selling his timber to local agents, but the returns were poor. It was only after becoming a member of NCT that he says he realised the full value of his timber.

He noted that the regular workshops and field days organised by the local NCT office have helped him enormously, and says NCT is a reliable market partner with an efficient payment system. 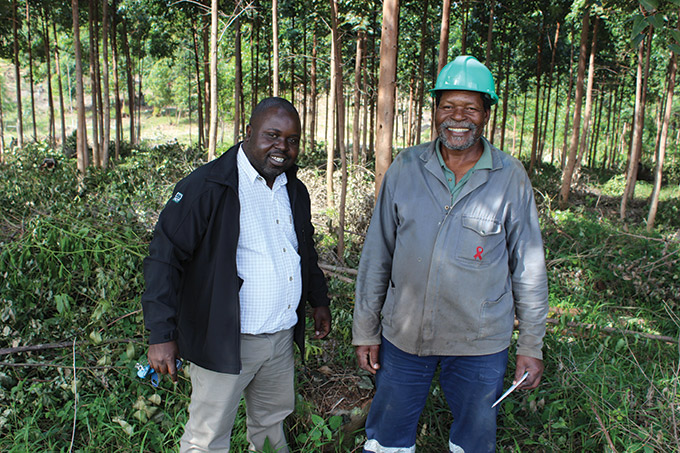 Mdumiseni Msomi and Elvis Nyathela of NCT … Mdumiseni says since joining NCT he has realised the full value of his timber. 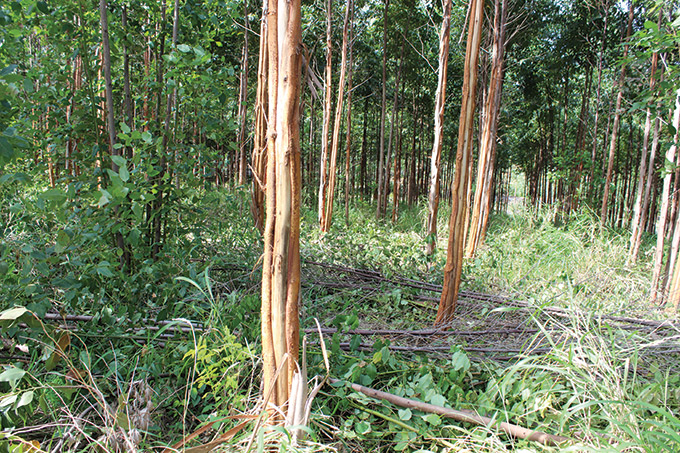 The tell-tale signs of fire damage, a constant threat to small-scale and commercial growers alike. 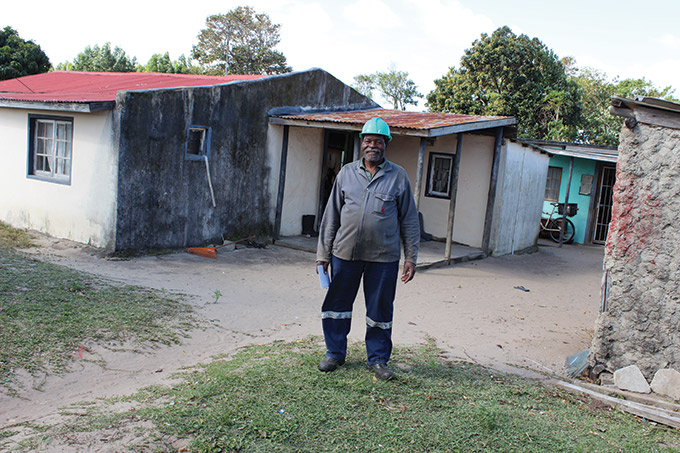 Mdumiseni Msomi in front of his homestead. He farms 10 ha, eight of which are planted to trees, which have contributed significantly to the cost of raising his family. 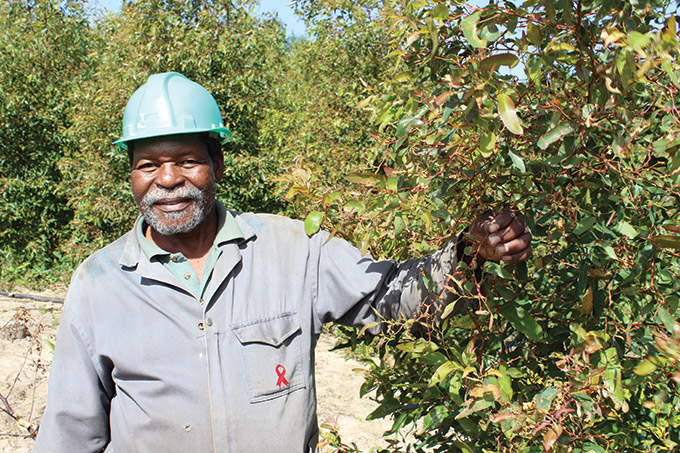 Like many small-scale farmers in Zululand, Mdumiseni’s clones have been badly damaged by Leptocybe invasa, hence the switch to C. henryi.