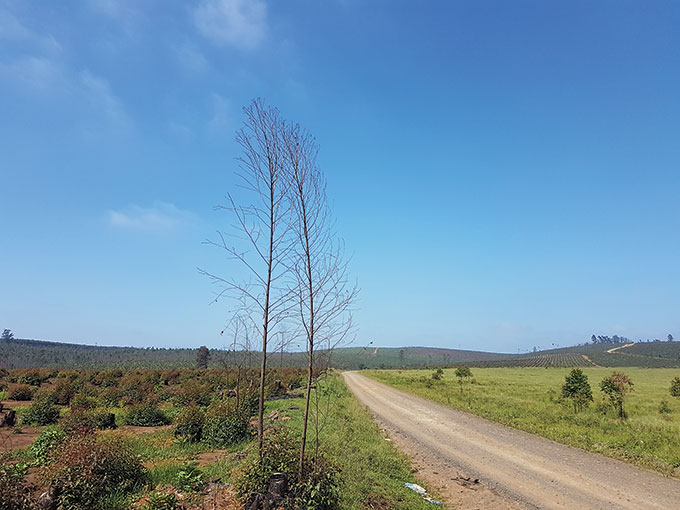 Coppicing after illegal harvest at Richmond.

‘We want our land back, jobs and economic opportunities’ … a case of timber gone missing at Richmond Municipality.

Richmond municipality, which is located in the KZN midlands area, owns 538 hectares of commercial gum plantation. With good soils, plentiful rainfall and good management provided by NCT Forestry over the past 14 years, the plantation has been highly productive, generating revenue for the rural municipality and creating around 40 sustainable jobs mainly through the development of local contractors.

However escalating timber theft and deteriorating security prompted NCT Forestry to terminate its plantation management contract with the municipality in mid-2018. Since then all the mature timber has been felled and stolen, and forestry operations have ground to a halt.

Unfortunately the theft of standing timber and log stock escalated sharply in 2018, to the level that – even with the help of security companies – the safety of NCT Forestry staff and contractors engaged in forestry operations in Richmond was under threat.

This risk to personnel was the main reason that led to NCT’s decision to terminate its plantation management contract with Richmond municipality on 30 June 2018.

In July the Richmond municipality issued a tender inviting interested parties to submit bids to manage its plantation. The tender process was, however, aborted with no reasons given by the local authority to the bidders.

Without proper interim plantation management measures put in place by the local authority after NCT pulled out, there was a vacuum which exposed the plantation to further risk. As a result, between June 2018 and November 2019 the municipality plantation was besieged by local community members who harvested and removed all the mature timber from the plantation.

According to municipal spokesperson Samora Ndlovu who doubles up as the Speaker of Council, unknown individuals helped themselves to the local authority timber without authorisation. A case of timber theft was opened in July 2019 at the Richmond SAPS. However no suspects have been arrested to date.

According to the Democratic Alliance (DA) representative in the Richmond council, Councillor Godwin Mandoda, there was a lack of political will from council and the police to bring anyone caught in the act of stealing timber to book – even during NCT Forestry’s time. As a result he said the culture of felling timber from the local government plantation continued without any consequences.

Illegal harvesting
When NCT Forestry pulled out of the plantation management contract in mid-2018, it is estimated that there was 80 hectares of mature standing timber. NCT Forestry managed the plantation on an eight-year rotation for gum pulp. The plantation has a MAI of 15 tons per hectare per annum. Thus harvesting 80 ha of mature timber could be expected to yield about 9 600 tons (80ha x 15 tons/ha/yr x 8yrs). This would be worth about R8,2 million at current market prices.

According to our sources most of the felled timber sited at the ‘community’ depots was cross cut into 2,4m lengths, debarked and knots removed as per pulpwood specifications, so it was probably sold as pulpwood. The illegal harvesters used chainsaws to fell standing trees, de-limb and cross-cut, while manual labour was used to debark. Tractor-trailer combo units and flatbed 8-ton trucks were used to short haul the timber from the stump site to the loading zones.

The loading zones were not conventional as per normal forestry operations as they were created along residential roads in the townships/villages near the plantation and sometimes inside residential yards. Thirty-ton timber trucks were used to cart the timber to processing companies. The township economy came alive during this period due to the cashflows from the timber sales, wages from labour, plant hire and also the trade of timber labels which exchanged hands for R2 000 per ticket.

Forestry pundits would say that timber from 538 hectares is a colossal consignment to harvest and sell with no guaranteed market order. How then did the illegal harvesters secure timber labels which would enable them to sell their timber? So, when quizzed as to who bought the timber, the municipality spokesperson indicated that the local authority could not account for the volume of timber sold nor determine its market value.

According to a reliable source who chose to remain anonymous, it is said that there were six local groups from the different townships within the Richmond zone who harvested the timber illegally and sold it to either agents/middleman with timber labels or orders, timber treatment plants or straight to pulp mills depending on the timber specifications each market required. These six groups were often at logger heads with each other in the fight for expansion of territory and often set alight their opponents harvested timber. Council did concede that during this period it had no firefighting resources or proto teams to respond to arson or wild fires.

The local FPA (fire protection association) indicated that they were always willing to assist when their cameras spotted smoke from the municipal plantation, but the illegal harvesting groups chased the fire tenders away and were said to be very hostile.

As a result of these illegal operations the plantation is vandalised and a significant portion of it is even aged at between 3-5 month-old coppice with no planting and maintenance work taking place. 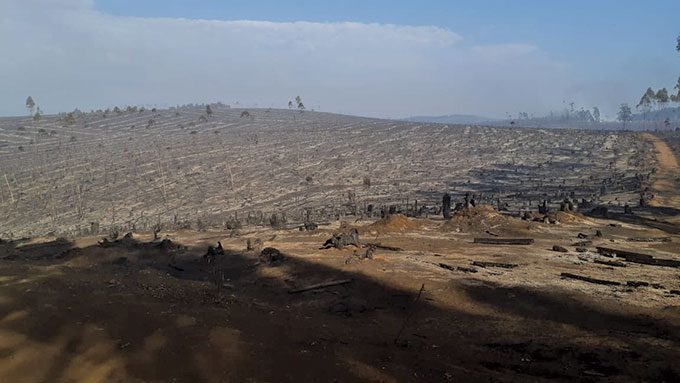 The Richmond Municipal plantation in KZN ... harvested illegally, burnt and no follow-up.

Conflict with community
On the other hand, communities living alongside the plantation boundary assert that they were dispossessed of their land upon which the plantation was established during the previous political dispensation before the dawn of democracy in South Africa.

Commented Johan Ngubane (60), a local resident of Ndaleni township and also a small-scale timber grower: “people living in these townships (Ndaleni, Magoda and Esimozomeni) simply want their land back, jobs and economic opportunities in as far as the plantation and the local economy is concerned”.

Mr Ngubane further indicated that many previous meetings with the council officials to this end were fruitless and consequently locals took matters into their own hands. The council spokesperson did concede that the municipality was aware of the land matter. Currently there is no official land claim on the Richmond municipal plantation land.

Way forward
When asked how the municipality planned to turn the situation around so as to normalise and bring the plantation back to full production, generate revenue and create employment, the municipality spokesperson indicated that the local authority planned to engage the services of a forestry consultant who would be an adviser to council, which would employ a full time forester to cater for the day to day matters and a contractor to plant, harvest and maintain the plantation on a profit-sharing model.

“The plantation was the local government’s biggest revenue contributor when it was productive and it will be a pity to see the timber reach maturity and have the same scenario unfold again if the timber theft matter is not resolved by council,” commented Godwin Mandoda.

The local authority and the communities living close to the plantation have to find common ground regarding the land claim issue and beneficiation. More importantly the captains of industry in the KZN South forestry sector need to tighten the belt when it comes to verification of timber and land ownership before purchasing freehold, or spot timber. This also includes verification of letters authorising third parties to harvest and sell timber on behalf of land owners.

Lastly, ground truthing is also of paramount importance. There is a need to physically check whether the timber to be purchased does actually exist, before issuing timber labels to prospective suppliers.