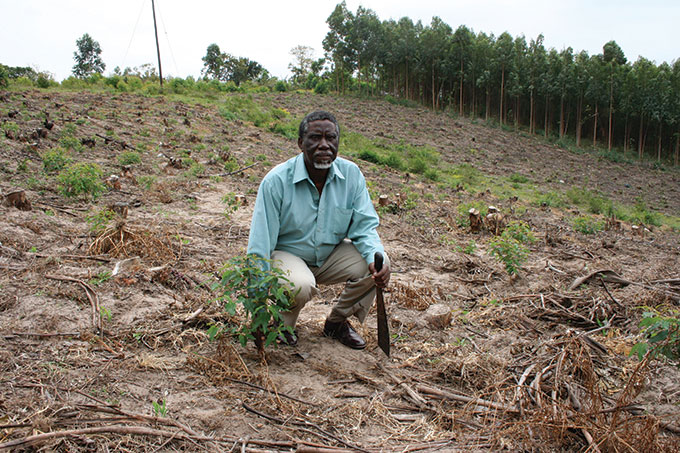 The Southern African Forestry Assurance Scheme (SAFAS) is set to transform the forest certification landscape in Southern Africa and possibly beyond. This local initiative driven by Sappi, NCT, TWK and Forestry South Africa (FSA) and strongly supported by the Department of Environment, Forestry and Fisheries is aimed at providing small, family-owned plantations with a viable route to certification, and improving the sustainability of forestry operations of all scales.

SAFAS, a not-for-profit company, has developed a certification standard that has been endorsed by the Programme for Endorsement of Forest Certification (PEFC). The PEFC is the largest forest certification system in the world, in terms of certified area, and is recognised as the system most suited to smallholders. This is because the PEFC allows countries to develop their own standards from the ground up, as long as their process is followed and their sustainability criteria are met.

SAFAS has a vision to manage a single standard in South Africa which could be endorsed by PEFC and the FSC. Such a system would be accessible to all scales of forestry, enhance forest sustainability and give assurance of sustainability to global markets.

The SAFAS team is in the process of getting a certification body accredited to carry out audits against the standard. This is expected to be finalised soon, with the first accreditation audit of NCT’s group certification scheme set to take place in January 2020.

The certification of NCTs group scheme will allow NCT to bring a lot more of the private farmers and community owned forestry into certification. Sappi and TWK will follow soon after that. The scheme is open to all forest owners in South Africa and has the potential to be extended to other countries in Africa. 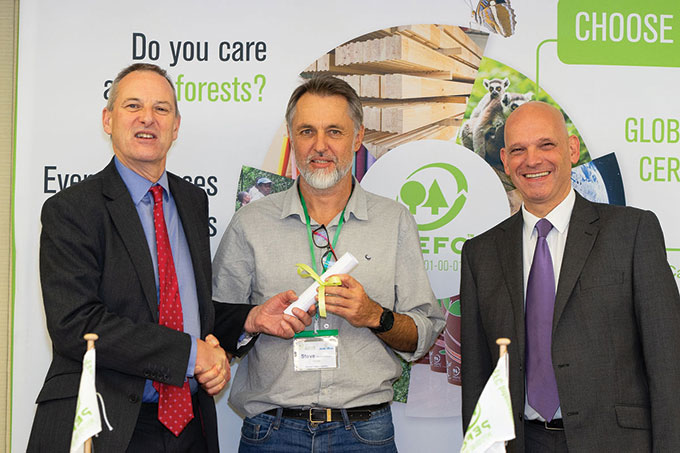 SAFAS director Steve Germishuizen (centre) received the SAFAS endorsement certificate from Peter Latham (Chairman of the PEFC Board) and Ben Gunneberg (CEO & Secretary General of PEFC) at the General Assembly meeting in Switzerland in 2018.

One of the main motivators behind this is that despite nearly 20 years of effort, smaller, family owned growers in Southern Africa, including those operating on communal land, have been unable to get certified. With international markets increasingly demanding timber sourced from certified forests, there is a real threat that these growers will be excluded from world markets, thus impacting negatively on their livelihoods.

This, in the view of the SAFAS directors, could force small-scale forestry operations to the margins of the economy, deepen rural poverty and boost unemployment. The fact that almost all large and medium scale forestry companies in South Africa are certified by FSC, while only a handful of the smaller commercial growers and none of the small-scale growers are certified, corroborates this view.

It is ironic that while many forest certification criteria attempt to address inequality and the plight of poor communities, certification itself may be exacerbating poverty by creating a trade barrier against small-scale timber growers. In addition to this, these smaller operations have much less impact on the environment than do large scale operations, but remain uncertified due to the cost and complexity of certification systems.

Says Sappi’s Environmental Manager, David Everard: “The tragedy and irony is that in many cases the small growers are actually more sustainable and less impacting than large corporate forestry. Consumers do a disservice to sustainable social development by deeming small grower forestry bad and their timber to be unacceptable, and drive the wrong behaviour on the ground.” 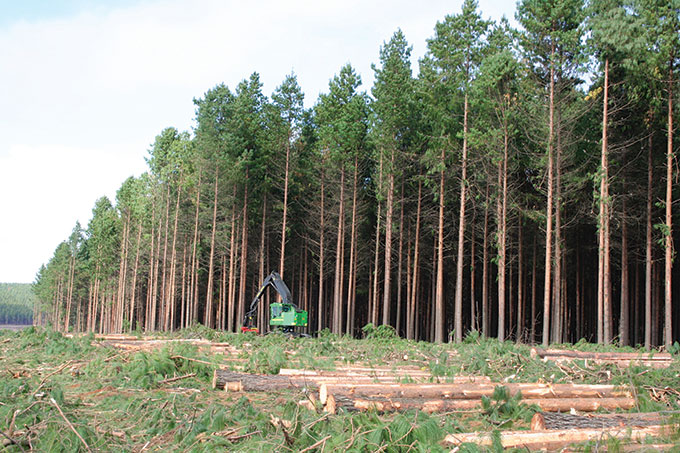 Large scale forestry operations, like this one in Mpumalanga, are almost all currently certified under FSC.

Another common criticism of current certification practice is that it does not deal with the core sustainability issues in forestry. Much of this is related to the requirement that all indicators are checked at every forest management unit, with no system for prioritising the issues of importance to sustainability.

In order to address the failures of current certification practice the SAFAS strategy is two pronged:
To develop an output-based certification standard, that is absolutely relevant to plantation forestry of all scales. To do this a risk-based approach was used to adapt the DEFF Principles, Criteria, Indicators and Standards for sustainable forest management to an auditable standard.