'Kerf' is the thickness of the cut a saw blade makes as it passes through wood fibre when lumber is milled. The ratio of usable lumber to sawdust generated in sawmill operations has a direct relationship to kerf. Thinner kerfs yield more lumber and generate less sawdust from a given volume of wood fibre. 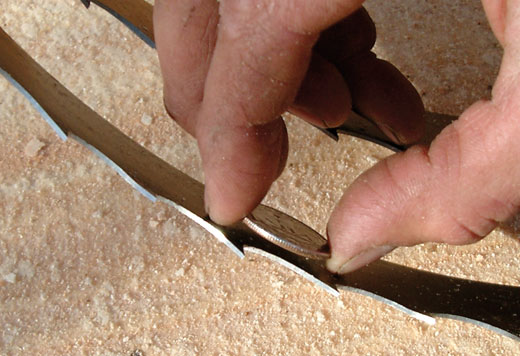 Over the past quarter century, portable, very thin kerf band sawmills capable of being operated by one or two people, have become increasingly important tools in the worldwide quest to achieve numerous environmental goals. Although the contributions of these have gone largely unheralded, the technology used and the nature of the materials they often process make them a significant asset in achieving efficient raw material utilisation, effective waste management, recycling goals and the carbon sequestration needed to minimise greenhouse gas emissions from both rural and urban forests.

The environmental advantages of thin kerf sawmilling are substantial. As just one example, US Forest Service researcher Stephen Bratkovich, has reported that typical sawmills in the US operate at about 50% efficiency in terms of lumber recovery. In a study of a pallet lumber mill in Missouri, Bratkovich demonstrated 69% efficiency for a thin kerf mill with a .050" blade cutting thin lumber.

"The US annual cut of timber for lumber products is equivalent to approximately 240 million trees," Bratkovich writes. "We could save the equivalent of 69 million trees annually if our recovery efficiency improved from 50% to 70% in our primary processing industry." Those unharvested trees, according to Bratkovich, would continue to absorb about
900 000 tons of carbon dioxide and produce about 650 000 tons of oxygen each year as they grow1. Similar studies at sawmills in other places, including Russia, have produced like findings.

In recent decades, the increased sawmill efficiency has become widely available through the development of portable thin kerf band sawmills, first introduced to the public on a commercial basis about 25 years ago. Initially they were regarded as being little more than 'hobby saws.'

Today, this technology is being used to produce large quantities of lumber from fibre that would have been either completely wasted or under-utilised. One manufacturer alone, Wood-Mizer, reports it has sold more than 30 000 units over the past 25 years. The company has units operating in nearly every lumber-producing country in the world.