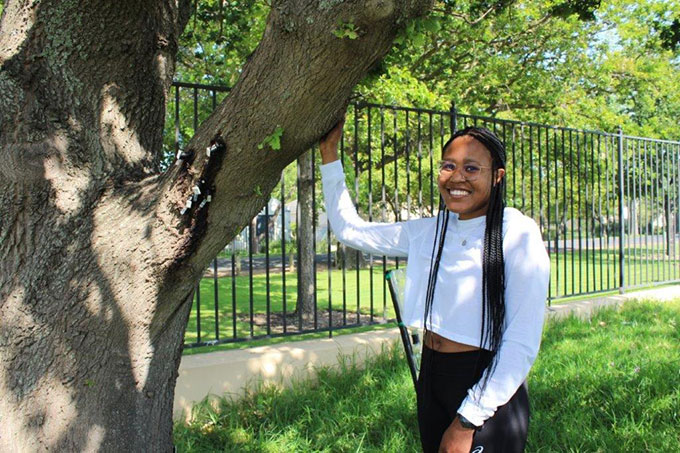 Research being conducted at one of the country’s leading wine farms, which dates back to the 1700s, could help to control the spread of the destructive polyphagous shot hole borer (PSHB).

The beetle comes from Southeast Asia and was first discovered in South Africa in 2017. The female beetle infests trees with a fungus ‒ they feed on this fungus, not the wood ‒ and the fungus eventually kills the trees. It has already caused devastation in gardens, parks and urban forests. Durban, Pietermaritzburg, Hartbeesfontein, Bloemfontein, Ekhurhuleni, Jankempdorp, Sandton and Sedgefield are among the hardest hit areas.

The beetle has been recorded in all nine provinces except Limpopo and the list of infected trees is ever-expanding. Some of the most susceptible trees are American sweetgum, Japanese maple, Chinese maple, box elder and English oak. Alarmingly, the PSHB beetle is also penetrating into the indigenous forests of Durban, Knysna and George.

On a more positive note, scientists have the beetle in their sights. At the forefront of this research is Heather Nependa from the Department of Conservation Ecology and Entomology in the Faculty of AgriScience at Stellenbosch University. She is undertaking research on the pest for her doctoral thesis.

Since 1999 Vergelegen has partnered with the University of Pretoria to lead research into leaf-roll virus, which is specific to grape vines and affects most vineyards in the country. Vergelegen also completed the largest privately funded alien vegetation clearing project in the country in 2018, and has been the site of numerous masters and doctoral theses on topics ranging from grasses and dragonflies to bontebok and eland.

“We are the custodians of a wonderful tree collection, including five Camphor trees planted by Van der Stel, and an English oak believed to be the oldest oak tree in South Africa,” said Vergelegen Risk and Commercial Manager, Leslie Naidoo. “Unfortunately, several of our tree species are potential PSHB hosts. These include London plane, English oak, sweet gum, willow and maple trees.” 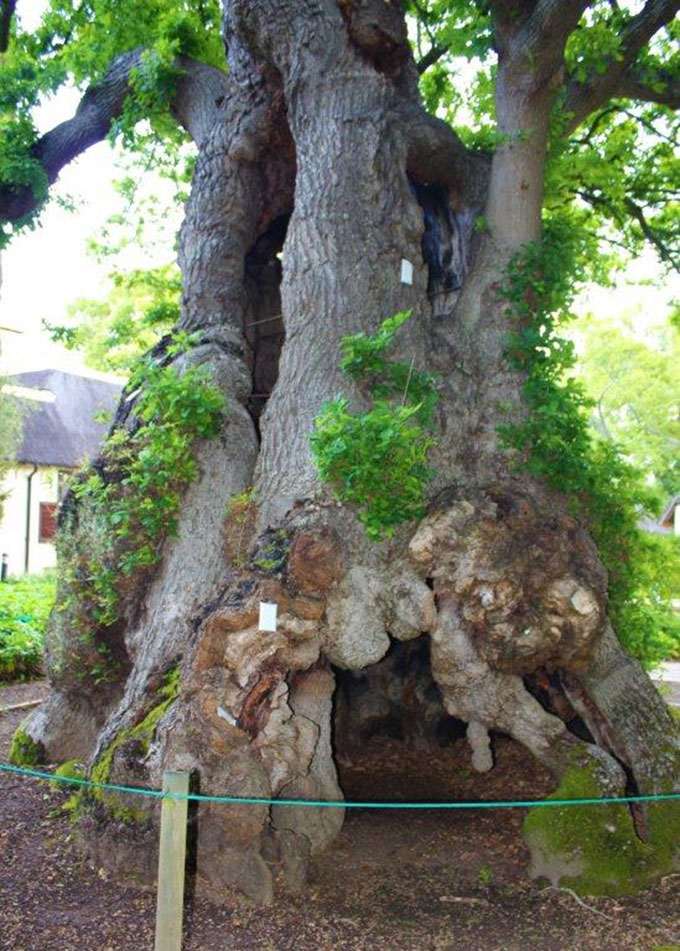 Repellant pouches on an ancient English oak, believed to be the oldest oak tree in South Africa. (Photo: Judy Bryant)

This environment suits scientists, says Heather, as the history and biosphere of Vergelegen are “a microcosm of urban and peri-urban areas in South Africa. This allows for extensive research on the beetle and its potential impact on the country.”

The PSHB Research Network first confirmed the beetle on several tree species in Somerset West in 2019. Vergelegen put strict measures in place to avoid contamination. These ranged from banning the transport of firewood into the estate, to installing monitoring traps and repellent on the farm border.

However the hot summer days of early 2020 boosted beetle infestation in the town, and the beetle penetrated Vergelegen’s defences.

Heather says the main aims and objectives of her research include:
• Establishing a monitoring and early detection scheme: Learning more about the life history of the beetle, how it spreads, and the symptoms of damage on different tree species. This will shed light on how fast the infestation is spreading.
• Unravelling the PSHB-fungus-tree relationship: The aim is to find out more about the life history of the PSHB and its associated fungus and how this affects trees.
• Testing the effectiveness of lures and repellents.
• Testing potential pesticides: Two types of pesticides (insecticides and fungicides) will be tested and their side-effects and appropriateness thoroughly reviewed.
• Collecting and analysing data in the field for a PSHB management plan geared to South African conditions.

This data, including measurements of the diameter of each tree and its reproductive state, has been submitted to the i-treetools.org website. This site has free software developed in the United States for assessing and managing forests and community trees and peer review feedback will be welcome.

Two types of traps used to monitor and collect the PSHB at the Estate. The simplest design uses one and two litre plastic bottles, fitted with a chemical lure. The second has been 3D-printed and is secured over holes made by the beetles on the trees. Steel mesh is placed over each opening to stop them from escaping. 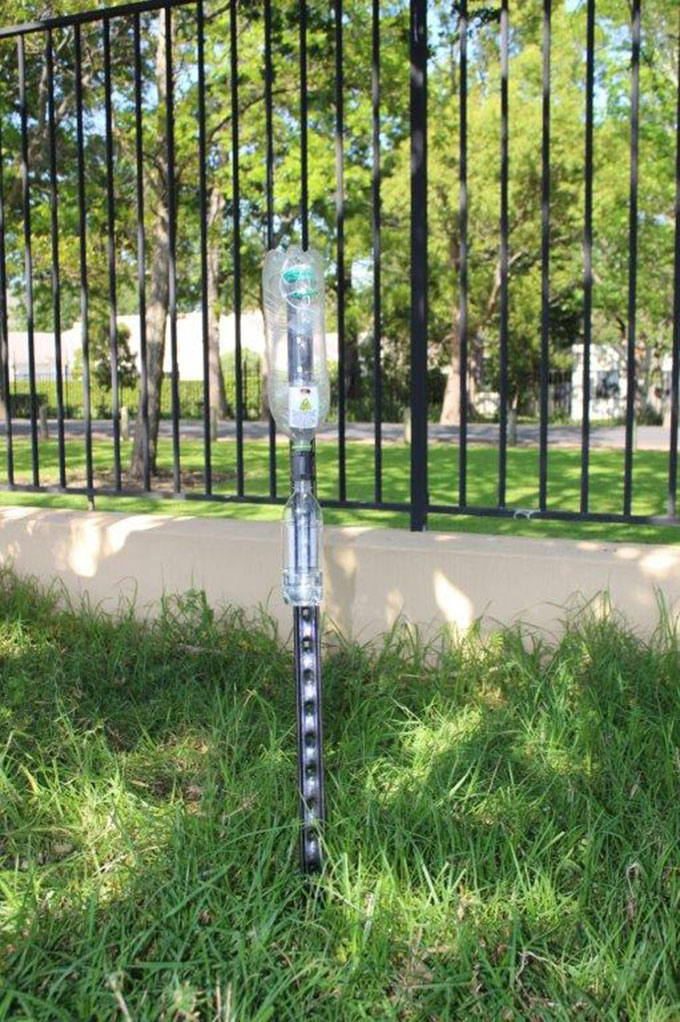 Plastic bottle traps, fitted with a chemical lure, have been set up on the estate to divert the beetles away from the magnificent trees. (Photo: Judy Bryant)

All traps are inspected every two weeks and contents are delivered to the University for inspection and identification.

“An important next step is to map out invasion pathways and determine what drives dispersal,” says Heather. Temperature logging buttons will be placed at each of the sampling sites, to help track how climate changes affect beetle dispersal. This data will also be important for lab experiments on beetle and fungus biology and physiology.

“Despite an established and expanding host list, the PSHB still seems to select hosts indiscriminately,” says Heather. “This will involve growing the fungus in the lab and experimenting with plant nutrients and plant volatiles to determine the criteria required for successful fungus establishment. This information will also help further model the impact and potential distribution of the PSHB. This will ideally be modelled for the greater Somerset West area to include more hosts.”

The project will run until June 2022. Findings will be documented and made available to interested parties via the Stellenbosch University’s Department of Conservation Ecology and Entomology.

PSHB is an ambrosia beetle (Coleoptera: Curculeonidae: Scolytinae) and is one of four species in the Euwallacea fornicatus species complex, native to Southeast Asia. The beetle maintains a symbiotic relationship with three fungi species that it transmits into host trees. The beetle emerged as an important invasive pest in Israel and California in the past decade and was discovered in South Africa in 2017. The Forestry and Agricultural Biotechnology Institute team from the University of Pretoria found symptoms of an attack on London Plane trees during routine tree health monitoring at the KwaZulu-Natal National Botanical Gardens in Pietermaritzburg.

To find out more about the beetle, visit:
https://polyphagous-shot-hole-borer.co.za/pshb/
https://www.fabinet.up.ac.za/pshb