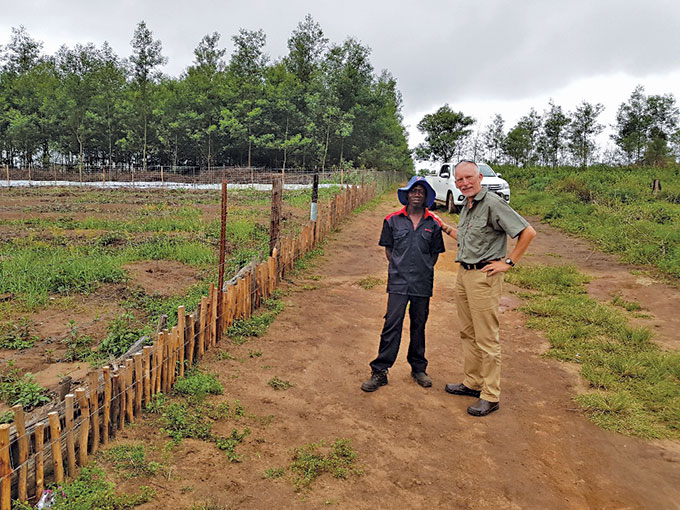 Mthandeni Ntanzi with Rob Thompson of NCT on his farm in Matimatolo. The rabbit-proof fence is visible on the left, and a nice looking wattle compartment out back.

Mthandeni Robert Ntanzi, grows 5 ha of wattle in the Matimatolo Traditional Authority area outside of Greytown in the KwaZulu-Natal midlands.

Rural settlements in this region were from the beginning allocated to farmers in terms of clan allotments that were subdivided over succeeding generations. Mthandeni’s father, the late Mr G Ntanzi owned a five hectare piece of land which was initially used mainly for food production to support the family throughout the year. G Ntanzi was a farm worker and he used his experience to cultivated his own land productively.

At the height of the out grower scheme launched by the sugar industry, G Ntanzi converted his crop land into sugarcane. However he soon realised that the economies of scale were not in his favour and so he had a re-think and converted all his cane land into wattle – the wisest decision he ever made.

Mthandeni started working closely with his father on the family farm in 2007 when his father’s health started to decline, absorbing as much of his knowledge and experience as possible along the way.

Family tree farm
Mthandeni took over the family farming operation in 2009 and has been running it ever since. He joined NCT in his personal capacity in 2013 and has been supplying all his timber through NCT. As a small farmer, he uses his own truck to deliver timber to NCT’s Ahrens depot, and delivers fresh wattle bark to the bark factory at Dalton.

He further supplements his income by providing transport services to other small growers in the area.
Mthandeni is not afraid to get his hands dirty, and works in the field alongside the nine workers that he hires on a temporary basis when the tasks require more hands.

His farming operations are of the highest standard and are an example to others in his community.

Young wattle seedlings in some of his compartments area frequently damaged by wild rabbits, so he has built a home-made fence to keep them out. He also leaves weeds to grow around the new seedlings in badly affected compartments as the weeds help to protect the seedlings from the browsing rabbits. This strategy has paid off as he gets a good stand survival for his new plantings.

However once the threat of browsing rabbits has passed he keeps his young trees weed free till canopy closure, thus ensuring rapid growth and uniformity.

Mthandeni hoes clean firebreaks around the perimeter of his farm as his plantation is at risk from runaway fires that come from the adjacent grasslands in the dry winter months. He also hoes every fifth row in his wattle compartments as an extra precaution.

Mthandeni also keeps goats which he allows to browse under the canopy of his trees. This practice provides them with valuable fodder while reducing weed competition for his trees.

He has built good relationships with his farming neighbours where they clean common boundaries for fire breaks. He also supports community members in need of firewood and timber.

Mthandeni is hopeful that he will be able to grow his business so that he can afford to buy a commercial farm to work and provide him with sustainable living income, and yearns for the day when his truck will be fully utilised thus increasing his income.