The missing link in mechanised harvesting 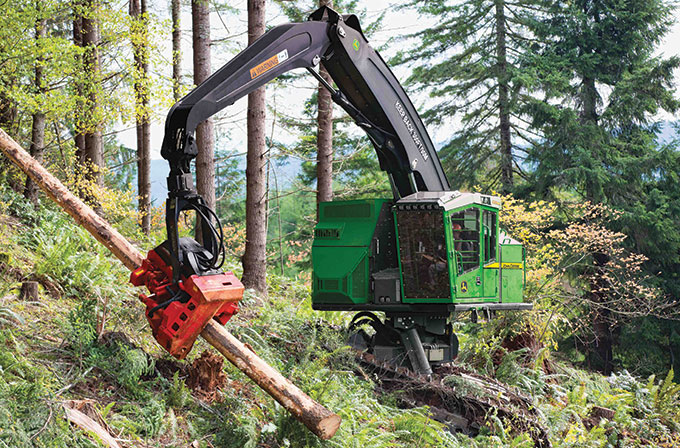 John Deere levelling harvester is capable of working on sleep slopes like this one.

The missing link in traditional steep slope harvesting systems has been the mechanized felling of trees on steep slopes. This has resulted in a major focus by harvesting contractors and equipment manufacturers in recent years on the development of innovative equipment and techniques to accomplish steep slope logging safely.

Writing in a recent issue of the Timber West Journal of Logging and Sawmills, Richard Lawler, director of Forest Engineering for John Deere, said that the latest innovations in the mechanization of steep slope felling involve the use of cable-assist winch systems, where a cable winch is used to supplement the traction of the machine working on the slope.

He says that the purpose of this cable winch system is to replace the portion of the traction that is lost due to gravity, which even extremely capable, modern leveling harvesters cannot defy.

The weakness of leveling harvesters when working on steep slopes, he says, is the potential loss of traction, which causes the machine to start sliding downhill. In the worst case scenario the sliding machine builds momentum and has the potential to tip over when it comes into contact with a solid object such as a tree stump.

Winch assist systems help by providing the operator with the same amount of traction they have when they are on flat ground. 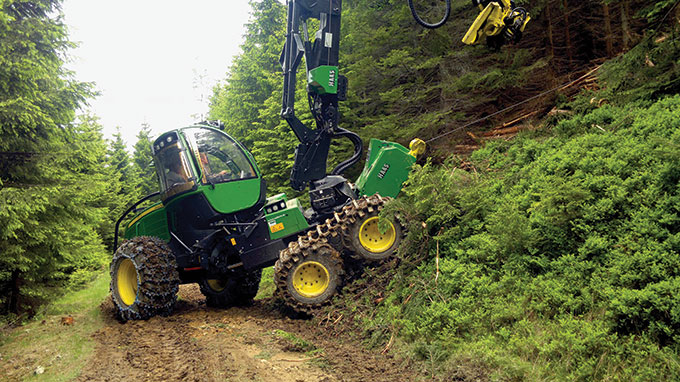 Lawler explains how a winch assist system functions: typically it involves an ‘anchor’ machine (such as a bulldozer or excavator) fitted with a large winch system positioned at the top of the slope. The end of the winch cable is attached to the tracked felling machine. The anchor machine is typically remote controlled by the operator in the felling machine.

Lawler says that this system has both safety and productivity benefits. However soil disturbances on steep slopes is a major issue due to the potential for erosion. However Lawler says the risk can be minimized with careful job site planning, and the cable assisted felling machine can be used to repair areas where soil disturbance has occurred before leaving the site.

Regarding the future of forestry, Lawler predicts there will be increased automation on forestry machines which will ultimately lead to autonomous vehicles. Skidders and forwarders will likely be the first autonomous machines. He said increased use of site mapping technologies will enable route planning to occur. Removing the operator from the system will enable smaller, lighter machines to work in groups for longer hours in a day. 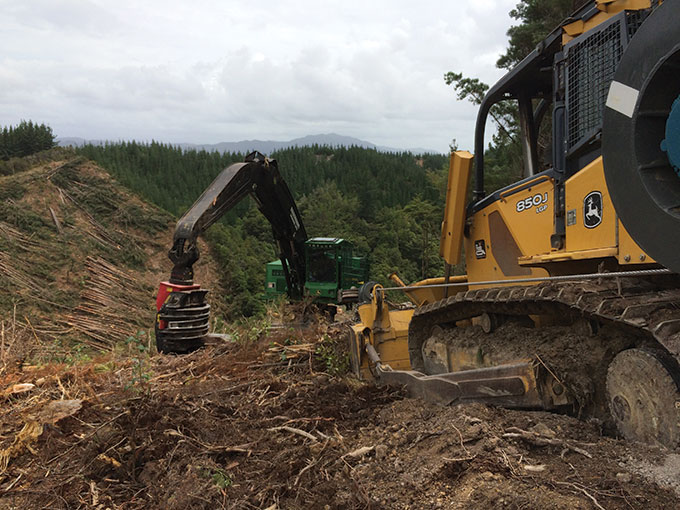 The excavator anchors the winch at the top of the slope.

Ponsse has launched its latest debarking head – the H7 HD Euca – which follows the release of the Ponsse H8 HD Euca. This new powerful harvester head joins an impressive line-up of harvester heads manufactured by Ponsse of Finland.

Bell pre-owned equipment can now be shopped online thanks to the launch of a dedicated global website, pre-owned.bellequipment.com, which is

John Deere has expanded its skidder lineup with the release of the new 768L-II Bogie Skidder, a purpose-built machine designed

Timber contractor gears up with Bell

This is an extract from an article written by Roger Grafton, that appeared in the first issue of SA Forestry