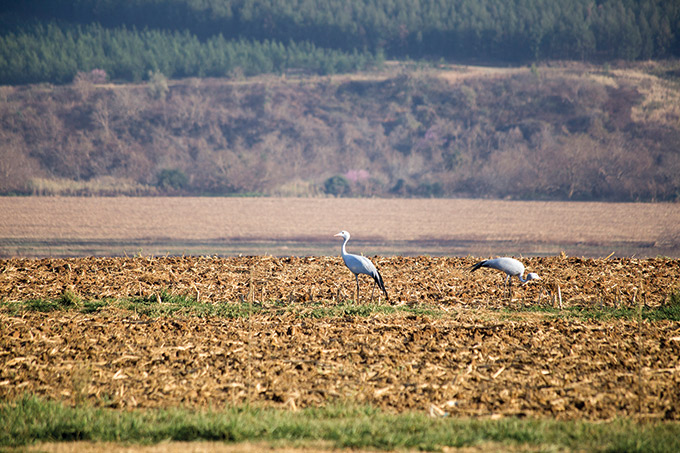 Endangered blue cranes feeding on a timber farm, KZN Midlands. Blue Cranes are most vulnerable to human disturbance when they are breeding. Photo: Samora Chapman

The living spaces of animals are diverse. But they are also relatively easy to understand, once you grasp the fact that nothing in nature is discrete. There is always a continuum - a gradual increase in ‘something’ that renders that specific space suitable for an animal, or not. Also, no animal occupies only one living space. They move - no surprise there. So they often need a variety of habitat types to perform their various life functions.

Very broadly, there are animals soaring in the air currents above the earth surface, an often-overlooked living space. Then, there are the ones living in forest canopies (arboreal) and forest understorey, the ones living in woodland, savanna, grassland, wetland, and water (aquatic), those living in and among rocks (rupicolous), and those below the soil surface (fossorial). We know very little about fossorial animals, since they are mostly out of sight. However, they include a number of threatened species, notably skinks, snakes, and golden moles.

Within these broad living spaces, animals start spreading themselves out to find the habitats that they like best. Each species’ preference will become apparent, as they distinguish between mountains and coastal plains, flat lands and hillslopes, whether there are rocky outcrops around, wetter vs. drier habitats, and sandy vs. clayey soils. They will disperse along a gradient in elevation, open vs. closed woodlands, old growth forest vs. relatively young thicket, and assess whether a grass layer is broken or continuous, and short or tall. Wetland species will differentiate between temporary and permanent wetlands, open vs. vegetated water surfaces, and water flow rate, which influences the underlying substrate and, therefore, specific aquatic food items. Sometimes, occupation of a specific area will depend on the type of shelter available, such as old termitaria for snakes, rotting logs, or large trees with cavities.

Tolerance to human disturbance
On top of all species’ likes and dislikes, of course, is the matter of human disturbance. The outcome of human disturbance, to a large extent, depends on the species in question. Is the animal species adapted to cope with human disturbances? The African Marsh Rat (Dasymys incomtus) and Maquassie Musk Shrew (Crocidura maquassiensis) only inhabit intact (or pristine) wetland and riparian zones without any human impacts. Similarly, endemic and endangered Southern Tree Hyrax (Dendrohyrax arboreus subsp. arboreus) only inhabits intact indigenous forests with trees that form cavities in which they can live. In contrast, the endemic Pondo Flat Gecko (Afroedura pondolia) live with people in their houses along the KZN coast. Similarly, the vulnerable and endemic Southern Bald Ibis (Geronticus calvus) can make use of sportsfields, golf courses and croplands in addition to its native grassland habitat. Specifically in the forestry sector, it is interesting to note that the vulnerable Crowned Eagle (Stephanoetus coronatus) uses forestry compartments along with its native forest and woodland habitats. Furthermore, fire exclusion from narrow corridors could create additional habitat for the Bush Blackcap (Lioptilus nigricapillus) – a vulnerable endemic bird, which particularly likes Ouhout (Leucosidea sericea) and Sagewood (Buddleja salviifolia). Meanwhile, wetland delineation has created suitable habitat for the vulnerable African Grass Owl (Tyto capensis), which particularly likes tall rank Cottonwool grass (Imperata cylindrica) for constructing tunnels, roosting and breeding. The majority of threatened species can tolerate some form of human disturbance. But we should keep in mind the more sensitive species, which are the ones most likely to disappear from South African landscapes.

Although these species inhabit fire dependent vegetation types, they are themselves fire sensitive because they shelter at the bases of grass tussocks when threatened (also by fire). This leaves them at a distinct disadvantage when controlled fires burn into the wind (i.e. back burns), because these types of fires transfer more heat energy downwards into the grass tussock where these animals are hiding. Rather, cool head fires that burn with the wind should be used to manage areas where Grass Lizards occur.

Narrow-range endemics
The degree of overlap between a species’ distribution range and the likely footprint of human disturbance is another consideration. Here, we can look at the Midlands Dwarf Chameleon (Bradypodion thamnobates) - a vulnerable, narrow-range endemic occurring between Howick, Mooi River and Nottingham Road. The whole of this species’ distribution range is impacted by forestry, agriculture, and urban development. However, the saving grace is its relatively high tolerance to human disturbances. Although it prefers understorey vegetation in Southern Mistbelt Forest, it is also found in road verges and urban gardens, as long as there are many shrubs and trees around. This means that clever management of road verges, and mindful landscaping of urban gardens can make a real contribution to the conservation of this species, and may even create movement corridors between populations.

Specialist species
Species may have very specific preferences that may be tied to diet, habitat type, presence of other species, or really any other attribute. Predators with specific dietary requirements include the near-threatened African Striped Weasel (Poecilogale albinucha) that only eats small mammals, and the endangered Bat Hawk (Macheiramphus alcinus) that eat mostly bats (although it has learnt to eat birds too). Serval (Leptailurus serval) is a habitat specialist of wetlands, using networks of pristine and man-made wetland habitat to move around. The vulnerable White-tailed Rat (Mystromys albicaudatus) is a grassland specialist with zero tolerance for thicket, and so track vegetation succession after fire very closely. On a slippery note, the vulnerable Eastern Green Mamba (Dendroaspis angusticeps) lives exclusively in forest canopies. But most curious of them all is probably the Eastern Long-tailed Seps lizard (Tetradactylus africanus) with its specialist oviposition sites … on top of Anochetus faurei ant nests. Anochetus ants are ferocious predators that live in small colonies (<100 individuals) in cryptic localities. So to put this into perspective, Eastern Long-tailed Seps leaves its clutch of 1-5 eggs at the door of a colony of serial killers. And hope the ants think ‘friends, not food’ and rather attack the creatures attracted to the eggs? Nice.

Management implications
Knowing about these species and all their peculiarities raises questions about the validity of a landscape approach to ecosystem management. Is it necessary to inventory all species and their habitats, and rather take a species approach to management? No. Apart from the fact that this is not possible to do in production landscapes, there is also the matter that it might not be necessary. Managing ecosystems in accordance with best environmental practice guidelines do no harm to threatened fauna.

What then is the purpose of knowing where threatened species occur? Locality data for threatened species helps to focus monitoring and management attention. If managers know about species’ management requirements and specific periods of sensitivity, they can try to steer their management practices accordingly. For example, large ground-nesting birds (such as Denham’s and White-bellied Bustards, and Blue Cranes) are most vulnerable to human disturbance when they are breeding. Their breeding seasons (in spring and summer) do not overlap with foresters’ fire season, which means this disturbance is not a direct concern. However, fire might be a concern for Wattled Cranes (Bugeranus carunculatus), because they breed in winter, in the fire season. Livestock disturbance is a concern regardless of breeding season, because it is a continuous disturbance that could impact breeding success and chick survival, and so should be targeted by managers.

Swamp Nightjar
In comparison to these large birds, the Swamp Nightjar (Caprimulgus natalensis) is also a ground-nesting bird, but it is more sensitive to disturbances and more habitat specific, with a preference for coastal grassland, dotted with Lala palms, near wetlands and rivers. It follows that a foresters’ tolerance for mismanagement of disturbances (fire and grazing) in these ecosystems should be substantially smaller.

On the research front, 2019 marked the launch of a new research project by Rebecca Cawood about using threatened fauna as surrogates for ecosystem integrity, and species diversity of aquatic insects. It will help tremendously if we know whether the occurrence of threatened fauna can tell us something about the health of ecosystems, or about populations of other sensitive species. More news along these lines will surface from the Mondi Ecological Network Programme (MENP), as soon as the first results are published.

Related article: Much more than a simple box ticking exercise