Almost 20 years ago, I was invited to write a 'news and views' paper for the South African Journal of Science on the current status and future prospects of forest tree health in South Africa. I vividly remember preparing that paper as it was close to the end of the first year of the Tree Protection Co-operative Programme's founding, and because I was working on it while in the labour ward as I awaited the arrival of our second child. Thus, when Chris Chapman asked me to write a guest commentary to mark the 20th anniversary of the annual meetings of the Tree Protection Co-operative Programme (TPCP), I thought it would be interesting to return to that paper. I wished to consider whether the current situation regarding plantation tree health in South Africa was consistent with my predictions of two decades ago. 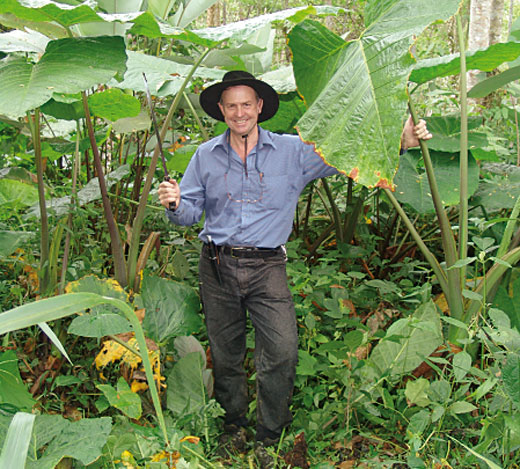 Professor Mike Wingfield, Director of FABI and Director of the TPCP, on a field trip in the Amazon jungle.

Looking back two decades, I am astounded at how little change there has been in terms of the challenges that the South African forestry industry faces in dealing with pests and pathogens. My 1990 analysis included a concern that land for forestry would become increasingly limited and that there would be a need to increase productivity on available land. Losses due to pests and diseases would thus be increasingly intolerable.

This is certainly as valid today as it was back then. While never wishing to be a 'prophet of doom', the fact that our industry would be increasingly challenged by new pests and pathogens has turned out to be a sobering reality.

On a more positive note, the challenge to develop a firm base for forest protection research and services to support the industry has been met. Thus the TPCP, which in 1990 was not much more than an experimental idea, has grown to become the strongest single programme dealing with pest and diseases problems in plantation forestry in the world.

Although this is not widely recognised, plantation forestry in South Africa has been challenged by pest and disease problems almost since they were first established. I often think back to the words of one of the pioneers of South African forestry, Dr. Luckhoff, who, in a paper at the 1964 IUFRO/FAO Symposium in London made the point that South African forestry had been fortunate in not having been seriously affected by pests and diseases. In reality, diseases such as Dothistroma needle blight, Diplodia shoot blight and die-back, Mycosphaerella leaf disease and insect pests, including the Eucalyptus snout beetle Gonipterus scutellatus, had in fact had a huge impact on shaping planting practices by 1960. My interpretation of Dr. Luckhoff's view is that he was referring to the level of damage that South African forestry might have incurred. This against the backdrop of the huge number of pests and pathogens of pines, eucalypts and acacias that had been separated from these trees when they were brought into a new and non-native environment.

Host shifts
Two decades ago, an overwhelming focus of the fledgling forest protection programme was on the threat posed by the accidental introduction of new pests and pathogens. This situation has not changed and we have had to deal with serious consequences of pathogens such as the pitch canker fungus Fusarium circinatum and insect pests including the Sirex wood wasp Sirex noctilio and the bronze bug Thaumastocoris peregrinus. Less clear was the fact that native insects and pathogens would have the capacity to undergo so-called host shifts to damage non-native plantation trees. Thus, the growing damage to Eucalyptus nitens by the apparently native cossid moth Coryphodema tristis and the discovery that the causal agent of Cryphonectria canker of Eucalyptus was not due to the introduction of the feared Chrysoporthe cubensis, but rather caused by a South African fungal pathogen of waterberry (Syzigium cordatum), which has undergone a host shift, have come as unexpected surprises.

While pests and pathogens have presented South African forestry with many new and unexpected challenges during the course of the past 20 years, very substantial progress has been made in dealing with these problems. The first projects of the TPCP focused on assisting member companies to breed and select disease-resistant planting stock, which has borne fruit. Where diseases such as Cryphonectria canker and Coniothyrium canker were of great concern in the 1990s, they are hardly found in Eucalyptus plantations today. The team effort by researchers, foresters and forest managers to contain the Sirex epidemic through biological control is already having positive results and it will surely be recorded as a major accomplishment.

As we look to the future, there is every reason to expect that there will be more examples of pests and pathogens undergoing host jumps to damage non-native plantation trees. Likewise, we have more reason than ever to expect that many pests and pathogens of pines, eucalypts and acacias will be introduced and become successfully established in this country in the future. This situation is no different to that of two decades ago. What is different is that we have a much better understanding of the threats than we had in the past. We also have a robust and sustainable programme focused on pests and pathogens that is able to support a sustainable plantation forestry industry in a way that was never possible in the past.

The reality that insect pests and pathogens seriously threaten the future of plantation forestry is now well established. Recognising the enemies and understanding their modes of action represents the most important step towards their management and control. In this regard, we are justified in having a positive outlook on the future. Yet there is no space for complacency. In the past, we have relied on new technologies to avoid the damage due to pests and pathogens. In this regard, the impact of vegetative propagation and thus the exploitation of hybrids, has been huge. Biological control of insect pests has served us well and it will continue to do so in the future. Yet pests and pathogens represent dynamic populations with a substantial capacity to adapt to changing environments. We will surely rely on many new technologies in the future, including those emerging from recombinant DNA techniques and genetic modification.

While technology and thus a deep reliance on a robust research base must underpin the future of sustainable plantation forestry, access to human capacity to provide this facility will be crucially important. A key feature of the TPCP has been to provide a robust education for young people interested in the various fields that support the broad field of forest protection. In this respect, the TPCP has provided a basis for the education of approximately 50 PhD and an equal number of MSc students during the course of the past 20 years. This is connected to the fact that some 70% of the funding that supports the TPCP comes from the University of Pretoria or programmes linked to the education system such as THRIP, Centres of Excellence and the National Research Foundation. There is no question that remarkable synergy between the South African forestry companies and a university has provided a win-win situation for all parties concerned. During their talks at the recent annual meeting of the TPCP, all three of the founder board members made the point that the programme illustrated a superbly successful collaborative venture between industry and the education sector. And it is clearly one that has provided South African forestry with the best possible means to contend with the growing challenge posed by insect pests and pathogens.