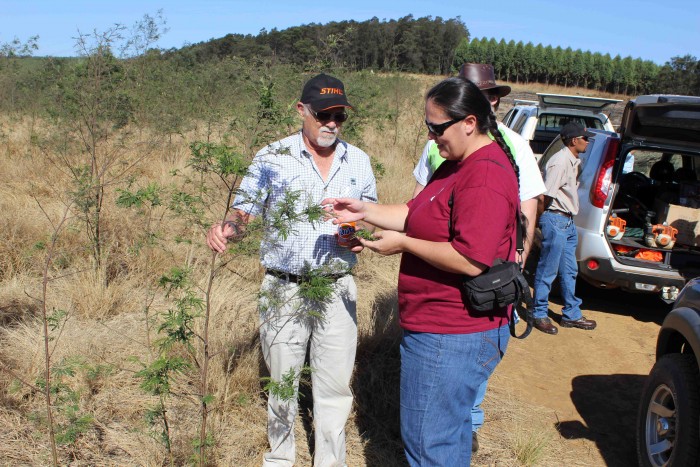 Izette Greyling of the TPCP inspects a black wattle block at Baynesfield in the KZN midlands that has been hit by the Wattle Rust.

South African foresters haven’t had to deal with rusts before – now they have two to deal with.

The rust, which attacks black wattle, Acacia mearnsii, was first detected in the KZN midlands in 2013. Since then the TPCP team has been working around the clock to find out what it is, where it comes from, and how to stop it.

During a visit to the midlands recently, Izette Greyling of the TPCP
said that the speed with which the rust is spreading is cause for concern. Last summer it spread from Harding in southern KZN to Mpumalanga. It is a rust fungus that causes defoliation in mild cases, and stem deformation in more severe cases.

The only good news around this disease, according to Izette, is that it has now been positively identified as belonging to the Uromycladium genus, and is thought to be of the fusisporum species, although this has still to be confirmed.

The TPCP is currently working with NCT and the ICFR to come up with management options, including selecting tolerant trees and doing chemical sprays on affected trees. The only short term option at this stage is chemical control, and NCT is planning a series of trials in conjunction with the ICFR and TPCP.

“The rust is causing stress on the affected trees and there will be follow-up insect and pathogen attacks,” said Izette.

Some of the local farmers said they had noticed intensified mired infestations in compartments where the rust was present.

The TPCP has made a special request to tree farmers to report occurrences of the wattle rust to Jolanda Roux (jolanda.roux@fabi.up.ac.za; cell: 0829093202) or the diagnostic clinic (darryl.herron@fabi.up.ac.za). Early detection of the disease in new areas will greatly assist in assessing its status and informing management strategies.

Visiting Australian scientist Alistair McTaggart said the wattle rust co-evolved with Acacia in Australia, and is spread by wind. He said the rust has been present in SA for 20 years or so, but now it has produced a new lifecycle stage and is causing damage. This may be due to an environmental trigger, possibly related to climate change. He said that most rusts don’t just go for stressed trees - they go for young, succulent shoots. It has been found on both black and green wattle. 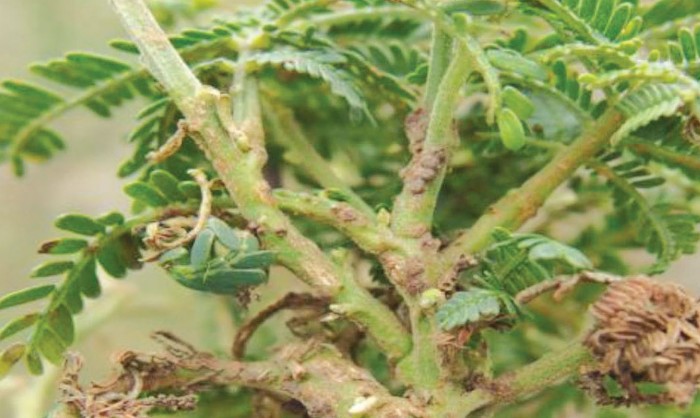 Chemical control is the only short term option that foresters currently have to manage the spread of the Wattle Rust. ICFR is conducting trials with NCT to test various applications.

Prof Jolanda Roux of Fabi, Ilaria Germishuizen and Ryan Nadel of the ICFR and Jeoff Pegg of the Australian Department of Agriculture, Forestry and Fisheries, are collaborating on the development of a risk model that will identify areas in South Africa that are at risk from the Myrtle rust pathogen, Puccinia psidii.

It was first detected in South Africa on the KZN south coast in 2013, and represents a potentially serious threat to Eucalyptus plantations in South Africa, and to native species of the family Myrtacaea. The rust has recently been identified on indigenous vegetation near Louis Trichardt in Limpopo, so it is likely that it is already spreading in South Africa. 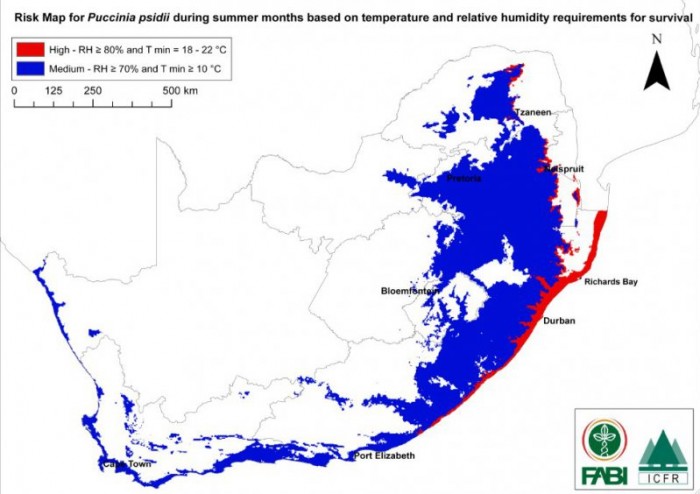 Ilaria said that the risk model uses bioclimatic variables as predictors to map the potential distribution of P. psidii. Temperature and relative humidity are key climatic requirements for the spread of the rust.

The rust, native to South and Central America, has already caused considerable damage to Eucalyptus plantations elsewhere in the world, and has driven several native Australian tree species onto the endangered list.

According to Jolanda, E. grandis and some hybrids are susceptible (E. camuldulensis is quite susceptible and E. urophylla less susceptible). She said the Fabi team is already collaborating with scientists in Australia to come with a strategy to manage the rust. 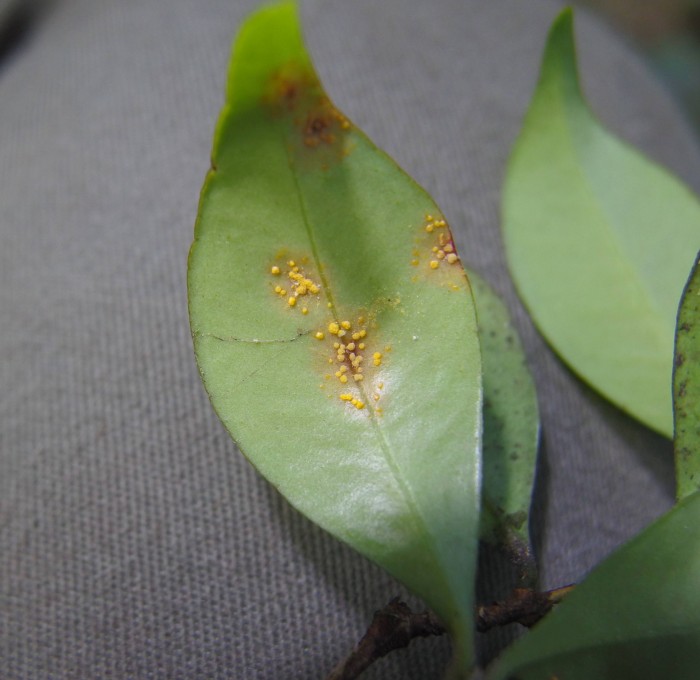 Look out for the Myrtle Rust, especially if your plantation is located in the high risk zones identified by the ICFR (see map). Eucalypts, especially E. grandis and E. camuldulensis may be susceptible.

Other pests and diseases to watch out for include the following:

Pitch canker of mature Pinus species, caused by F. circinatum, was first reported in Karkloof area in 2012, on 10-year-old P. greggii. It has also been found on 17-year old P. patula trees in Limpopo. Yolanda says there is a lot of work going into the breeding of resistant trees.

Copntinues to cause damage to Eucalyptus trees country-wide, especially in the Zululand area. The bio-co0ntrol agent that has been released is doing quite well, but Jolanda says it will be five years before it has a big impact. However there are already signs of diminishing Leptocybe damage in Zululand.

For many years this pest has been present in E. nitens in the Lothair area. However this year it was found in the Karkloof. It is specific to E. nitens and causes extensive wood loss. Jolanda says foresters who grow E. nitens in the KZN midlands area should watch out for it – so far it goes for only pure E. nitens species. A pheromone has been developed that attracts and traps the moth – it is now being tested extensively in field conditions.

Two new Eucalyptus pests have been found in the Gauteng area in 2014: Ophelimus maskeli (gall wasp) and the Spondyliaspis psyllid. They are currently only known in Gauteng, but may rapidly spread countrywide. The TPCP has already accessed bio-control agents to manage some of these pests, and are currently being tested in the laboratory.