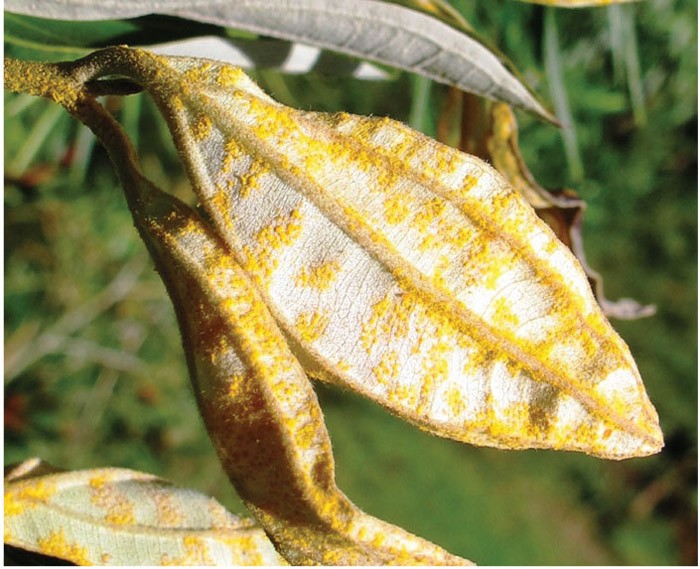 The Myrtle rust (Puccinia psidii), discovered in South Africa for the first time two years ago, is considered a high priority threat globally, writes Prof Jolanda Rouux of the TPCP, University of Pretoria. It has a wide host range in the Myrtaceae and poses a considerable threat to native ecosystems where these plants occur. The fungus is also a threat to eucalyptus species widely planted in commercial plantations in South Africa.

Foresters, farmers and landscapers are urged to keep a look-out for signs of the pathogen and to report any suspected cases to Prof Roux.

The non-native rust pathogen of Eucalyptus and other Myrtaceae, Puccinia psidii, was first reported from a single tree in a garden on the KwaZulu-Natal South Coast of South Africa in May 2013.  No other reports of the pathogen in that area have been received to date.

However during a survey of cycad diseases in the Wolkberg Wilderness Area near Tzaneen, Limpopo Province, two native Eugenia sp. plants with P. psidii were discovered in late July 2014.  Follow-up surveys in the area have confirmed the presence of the pathogen on more than 10 Eugenia plants in the Wolkberg and New Agatha areas near Tzaneen.  Some plants were showing leaf and shoot death as a result of the infection.

Most recently, in February 2015, P. psidii was discovered on an ornamental Australian plant, Backhousia citriodora, in a garden in Centurion, Gauteng.

Puccinia psidii, the myrtle rust pathogen, has been known from Brazil and other South and Central American countries for several decades.  It was discovered more than 100 years ago, but gained notoriety when it started affecting commercially grown allspice (Pimenta dioica), guava (Psidium guajava) and Eucalypt species.  In recent years the fungus has spread to the USA (1977), Hawaii (2005) and Australia (2010).

Infection of plants results in leaf spot, necrosis of leaves, shoot, flower and fruit infections, resulting in death of affected plant parts.  When producing urediniospores, the pathogen and its disease is easily identified by the masses of yellow spores in the lesions and on affected plant parts.  In some cases, cream to white telia may also be observed.  Brazil initiated extensive breeding and chemical spray programmes to manage the pathogen on eucalypts.  However, in Australia where the pathogen occurs on more than 100 native myrtaceae species in their natural environment, the extinction of key plant species is expected.

The threat of P. psidii to South Africa is considerable.  We have several native Myrtaceae (Eugenia, Syzygium, Metrosideros species) and multiple industries cultivating non-native Myrtaceae (Eucalypts, guava).  Based on experiences from other countries, the impact to our already threatened native ecosystems and to these industries can be significant.

We encourage you to spread information on this important pathogen as wide as possible and to report any possible sightings of the disease to the TPCP and CTHB.  For images of typical symptoms please visit: fabinet

Where can i get advice on treatment against this yellow rust? Email address given does not work.