Home » Skills training programmes for unemployed youth to be expanded

Skills training programmes for unemployed youth to be expanded

MTO Skills Programme Trainees at the George Saw Mill. They share a commitment and motivation to change their circumstances.

Following a successful programme of training under-educated young people in the Southern Cape, the MTO Forestry Group is now rolling out its training programmes for the unemployed youth to different geographical regions and associated industries.

MTO’s involvement in training unemployed youth started three years ago in the Southern Cape, where the company manages 50 000 hectares of forest plantations, and which is also home to the MTO Training Academy Concordia in Knysna. The academy is a highly accredited facility where thousands of MTO employees are trained.

“Employment prospects are bleak for under-educated, unskilled and inexperienced youth in South Africa’s economic environment. So, we decided to expand our training to those young people, with the goal of providing them with skills that will allow them to compete in the job market. Our only real requirement is that they are motivated to work hard and be committed,” says Yvonne van Romburgh, Business Manager at the MTO Training Academy, Concordia.

The programmes are free for the trainees, with MTO absorbing all costs. Learners also receive a stipend each month, protective clothing and equipment, and like the rest of MTO’s employees, a nutritional breakfast cereal each morning.

Mabuthi Dasi, who grew up near Knysna, was one of the first recruits in 2015. “I got lucky when MTO brought out the programme of training,” he says. “But I was scared they wouldn’t take me. I had no skills and only completed Grade 8.”

Dasi was one of 27 learners who completed the first Skills Programme for the Unemployed, which focused on General Forestry Skills, in 2015/16.

All 27 learners received certificates for completing their course. “Coming from an accredited training institution, these are valuable. When they finished the training, graduates were also assisted in compiling a proper application package, including a CV, and were supported in their job search,” said Yvonne. 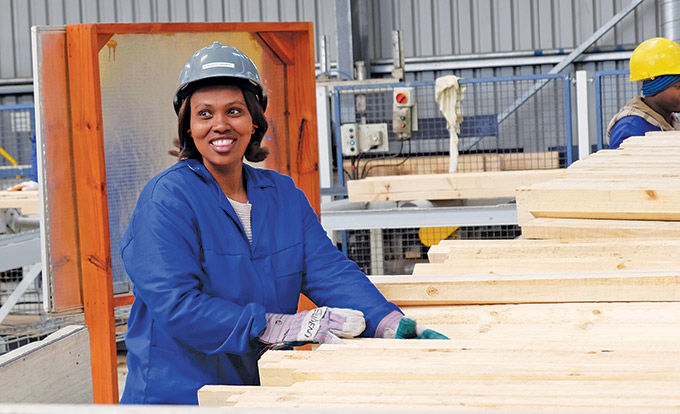 Trainee Funeka Mhayi-Mhayi is grateful for the opportunity to learn.

MTO has now expanded the Skills Programme to focus on different geographical regions and associated industries. Last year it launched a Harvesting Skills programme, recruiting from communities in and around the plantations surrounding George.

Each Skills Programme runs for three months, with learners gaining both theoretical knowledge in the classroom and practical experience from the mill. The specific training courses vary, based on the industry being targeted.

The current 2017 cohort of learners is mid-way through their training in Sawmill Skills at the George Saw Mill under the watchful eye of Facilitator Gabriel Lategan from MTO Training Academy Concordia.
“They are learning everything they need to get an entry-level job at a saw mill. I have high expectations, but also high hopes for them. My aim is 100% employment for them,” he says.

Yvonne said that the company’s current budget includes one Skills Programme annually, but MTO is considering running two or more. “At this point it is unclear where the next programme will be located, but we are considering MTO’s White River plantations in Mpumalanga.”

While MTO hopes to be able to offer jobs to all graduates, the goal is to provide training that allows them to get jobs elsewhere in the industry, or in related fields.

“What we really want for our graduates is employment. We hope that they apply for jobs within MTO, but we understand it isn’t always feasible. Even a job at a competitor is considered a victory by MTO,” Van Romburgh says.

can i join the unemployed programme,because i want to start building coffins in my location,now i just need to have knowledge and a skill programme,please i am in LADYSMITH,STEADVILLE LOCATION(KZN),MY NUMBER IS 0813994147 AND MY E-MAIL IS mnndlovu299@gmail.com,please just contact me to do this programme