Home » A glimpse into future possibilities for steep slope logging …

A glimpse into future possibilities for steep slope logging … 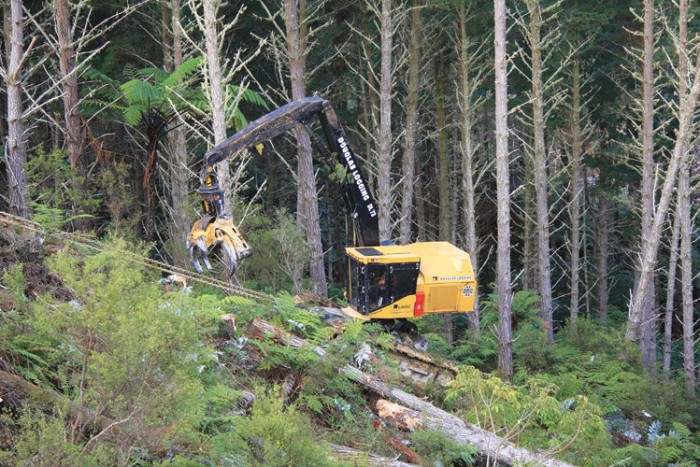 Harvesting on a steep slope requires something special from your crew and equipment.

Adapted from an article by Paul Iarocci, Between the Branches

Eric Krume is the owner of Krume Logging & Excavation in Castle Rock, Washington. He is also owner of manufacturing company, Summit Attachments and Machinery. Eric is a worker, an innovator and a dreamer. Whether he is pursuing logging, the design and manufacture of logging machinery or drag racing, he approaches the task at hand relentlessly and with singular focus and hard work.

Between the Branches made a spring trip to Longview, Washington –  a region that epitomises Pacific Northwest logging conditions with high rainfall and terrain variability – to see Eric’s latest innovation, a fully automated cable assist system tied to a Tigercat LS855C equipped for felling and shovel logging with Tigercat’s 5195 directional felling head. Eric, along with partner Bruce Skurdahl, designed and built the brand  new system that was being put  to the test.

Eric is of the opinion that the technology has not moved quickly enough to adapt to Pacific Northwest conditions and dynamics. He is constantly seeking out flexible solutions because of site differences from contract to contract. These beliefs are the driving force behind his manufacturing business. In addition to the tong thrower systems that Summit is actively marketing, Eric is developing new technology based on experiences in his own logging operations.

Eric bought his first Tigercat machine in 2012, an L870C feller buncher from Triad Machinery and followed up in 2013 with the LS855C shovel logger – a relatively new concept at the time. Always looking for alternatives to the norm, Eric also purchased a Tigercat 635D in 2013.

“Most contracts say no rubber tire equipment. Period,” Eric explains. “In the 80s  and 90s, they really abused that and it was ruts  and mud everywhere. When I said, hey I want to use a skidder, everybody said no. I fought tooth and nail for the skidder. I went to every company and I invited every company out.

“I had three days of a demo with the skidder before I bought it. I had to make sure that the landowners would let me use it. I showed everybody that this is not your average machine and this is what we can do with it. It took me four months but everybody signed off on it.” 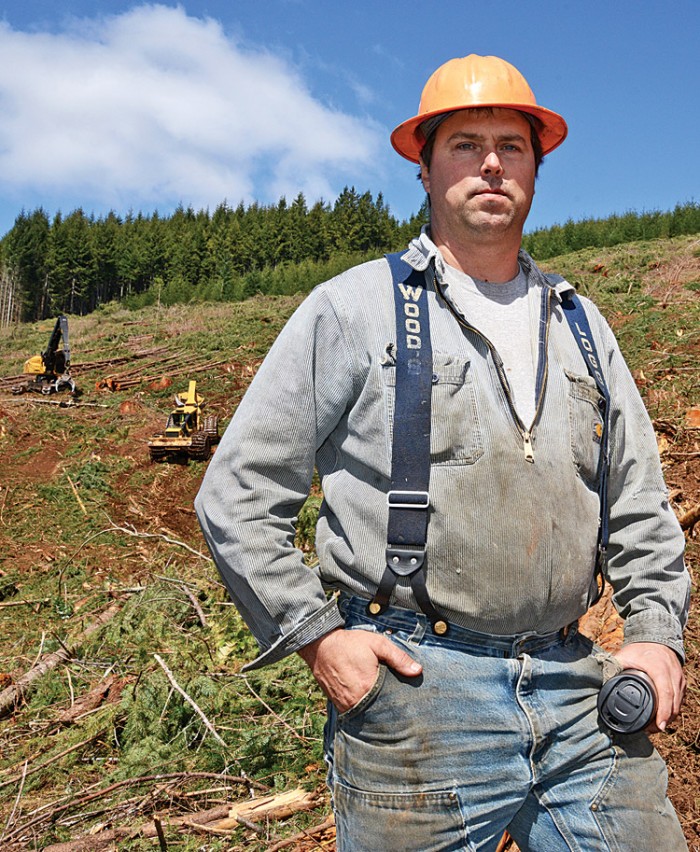 Eric Krume, owner of Krume Logging and Summit Attachments and Machinery, is a busy guy.

Shortly after acquiring the skidder, Eric purchased his fourth Tigercat machine, an 880 logger equipped for loading. But it was the concept of full mechanisation and automation with a two-man crew on excessively steep slopes that drew him to a second LS855C in 2014.

By this time Tigercat had sold a number of LS855C units equipped with a feller-director stick boom married to the Tigercat 5195 directional felling head for steep slope applications from Chile to New Zealand. The flexibility of the 5195 to fell large timber with a single cut and to perform double cuts without machine repositioning, coupled with the durability of the head for shovel logging, proved to be a winning concept in mountainous regions with oversized trees. On top of that, the LS855C carrier is quick, stable and agile on the slopes. Eric decided to take the concept a step further by designing and building his own automated cable assist system.

During the April BTB visit Eric, operating the machine himself, was opening up a new section  of the cut block on a slope averaging about 60% and then steepening to 80%. “I wouldn’t go here untethered,” he comments. “I want to tether my way into the steeper ground.”

With road access at the top, the cable assist allowed Eric to work his way down the slope, while felling downhill.

The set-up
The operator controls the winch as he descends or ascends the slope, preventing sliding and allowing for downhill felling.

An unmanned excavator equipped with a winch and yarder tower  sits at the top of the hill. A Wi-Fi signal between the two machines provides the LS855C operator with a view down the hill from a camera mounted on the excavator. The operator can toggle between this and the carrier’s rear mounted camera.

A second frequency allows the operator to control the winch as he descends or ascends the slope. The cable is not timed to the tracks so some operator skill is required to time the winch speed to  the track speed. The cable assist prevents sliding when descending and allows for downhill felling.

When ascending the hill there is virtually no site disturbance from the tracks. The machine climbs smoothly and easily. 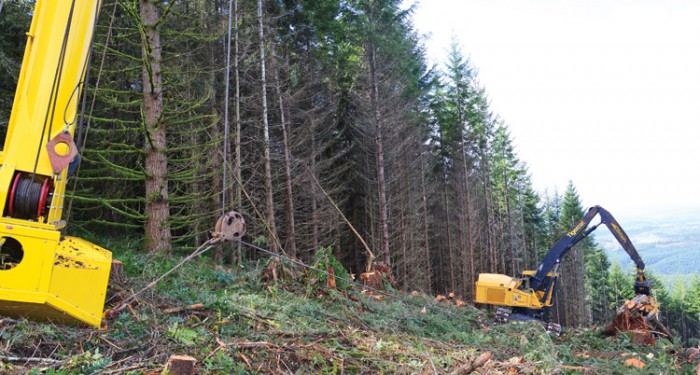 The operator controls the winch as he descends or ascends the slope, preventing sliding and allowing for downhill felling. 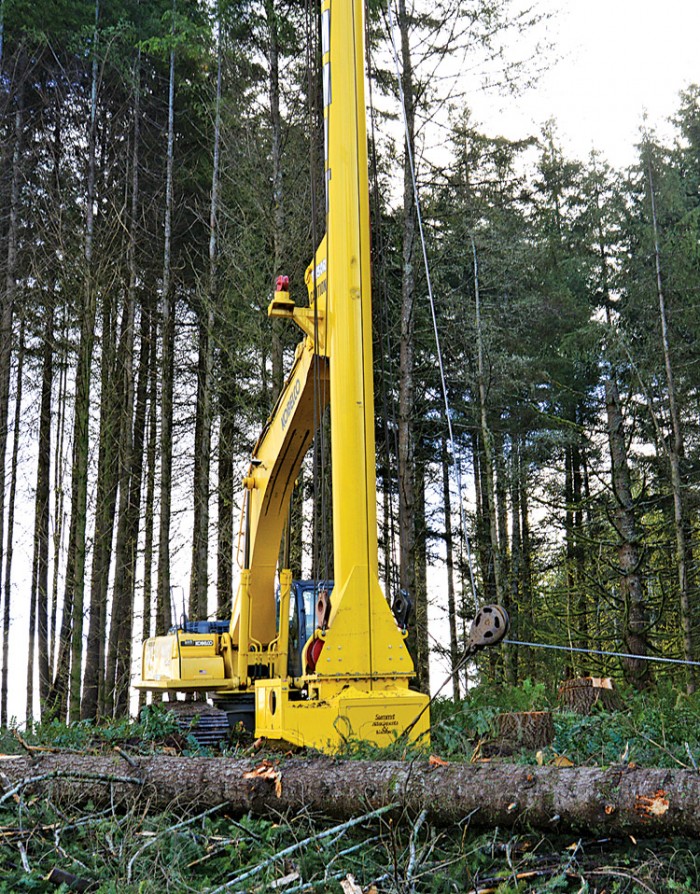 An unmanned excavator equipped with a winch and yarder tower sits at the top of the hill. 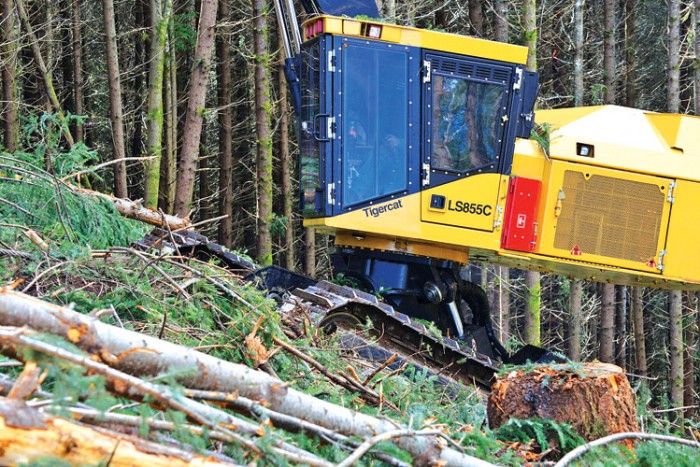 When ascending the hill there is virtually no site disturbance from the tracks. The machine climbs smoothly and easily.

Although the early trials are going well, Eric concedes that he is only halfway there. “I’m missing a piece. I still have got to figure out how to get all the wood onto the truck.” Gesturing toward the slope, he says, “getting down there is the easy part. Knowing what to do with the wood is the hard part.”

As Eric sees it, there are a couple of problems with grapple yarding as an extraction method. First it is most economical on large-scale operations with long hillsides. “The problem I have is that I don’t have a $1.5 million grapple machine and I don’t get this kind of ground a lot.”

No matter how well things are going on a given contract and how well the machinery is matched to the terrain, Eric has no visibility as to the type of ground he will encounter on the next contract. Second, the systems are expensive to buy, time consuming to set up and move, and require a lot of accompanying labour.

For the test tract, Eric ended up bringing in the other LS855C and shovelling the wood up to the landing. However, on steep slopes, uphill shovel logging becomes problematic after a couple of swings as the trees lose their branches. “How do you keep the wood from flinging down the hill?” muses Eric.

Eric envisions an automated grapple, half of a skidder if you will, attached to another machine with another drum on it. With one man felling, the second man could be processing at roadside as well as controlling the cable assist grapple machine.

“I want the grapple to just take my pile of wood and go up the hill. It might go slow but if I can bring a half a load of logs with me, so what.”

“My crew is what enables me to do all the extra things. I have always tried to train people and keep people working and it’s their hard work that allows me the time to think outside the box. I appreciate the job that they do for me and I keep focused on the fact that my company is only as good as the people in it. I want to invest in people. It’s really all that matters.” 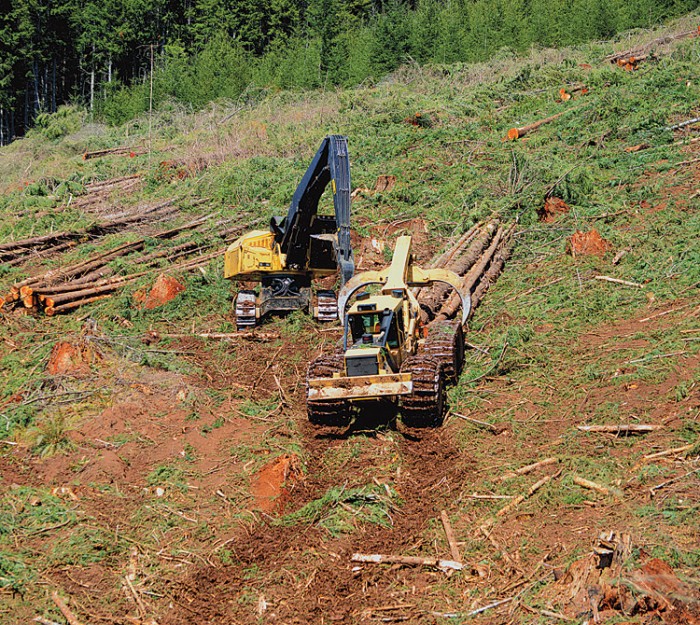 Eric fought hard to prove the six-wheel skidder concept in Washington and Oregon.