Home » Fire management under the spotlight

Fire management under the spotlight

﻿﻿﻿The Seventh Fire Management Symposium organised by Nelson Mandela Metropolitan University and the SA Institute of Forestry was held in Pietermaritzburg recently. This popular event was well attended by foresters and fire protection personnel from far and wide. 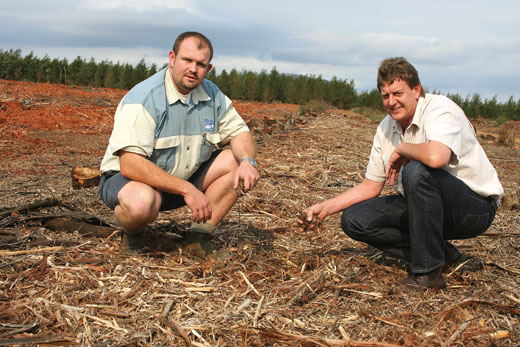 No need to burn - mulching reduces the fuel load in a clearfelled compartment. Horst Hellberg and Steve Glutz examine the material left behind after mulching on Horst's Vryheid farm.

Dealing with the media during disaster fires
The keynote address was given by Evelyn Holtzhauzen of HWB Communications, who provided a number of useful tips on how to deal with the media during crisis situations, like big fires. Evelyn provides PR and media communication services to Working on Fire, among other clients, so he has plenty of experience in this field.

Luke Radebe, Manager of the Fire Protection Associations Unit at DAFF, provided some background on the department's strategy regarding integrated fire management and FPAs.

He said that 30.6% of South Africa has extreme veld fire risk, 31.3% has high risk, 11.7% medium risk and 26.4 low risk. Government is focusing on promoting the establishment of effective FPAs in the extreme and high risk areas, which includes the forestry areas.

"We need FPAs because we need cooperation between stakeholders to prevent the spread of fire," he said. There are currently 227 FPAs registered in South Africa. He stressed that membership of FPAs is voluntary for private landowners, but is required by organisations that are managing state land.

Luke urged FPAs to submit annual reports to his department regarding the fire situation on the ground, as they need good information if they are to provide appropriate support.

One of the key benefits to landowners of belonging to an FPA is the presumption of not being 'negligent' until proven otherwise. He said that there are also major cost saving benefits for members through co-operation and pooling of resources.
"If you are a manager of state land and you do not belong to an FPA, you are inviting problems," commented Luke. He said that there are currently many lawsuits being pursued because managers of state land were not local FPA members.

Malcolm Proctor of DAFF, Free State, says his department is compiling a comprehensive hazard and risk map of the province, which makes strategic planning possible. It provides info on fire hotspots, fire incidences, intensity and frequency of past fires, fuel loads, social and economic risk factors, fire-fighting capacity, the presence of FPAs, and more.

Sustainability of fire insurance
Ruth Bezuidenhout of SAFIRE explained that the partnership between the client, SAFIRE and the re-insurers is crucial in the provision of sustainable plantation fire insurance.

"We as the insurer must add value to the process," said Ruth. "We need to understand forestry, the timber salvage markets, we need to be adaptable to cater for land claims and small growers. Our board is made up predominantly of timber growers, and we are committed to long term relationships."

At the same time, the client's willingness to be part of the partnership is important, and the commitment of the re-insurers to be long term partners is essential for sustainability.

"Never admit liability and admit to negligence for the spread of fire from your property to a neighbour's. If you are not an FPA member, it is much harder to prove that you were not negligent," said Ruth.

A landowner has an obligation to use all resources available to stop a fire that starts on his/her property, and to notify fire prevention authorities and all neighbours in case the fire spreads.

Temperatures in the low, middle and high Berg are generally lowest at 8 am, highest at 12 noon, and drop again towards evening and overnight.

In the mornings, the humidity is high, at midday humidity is lowest, and towards evening, it starts to rise again. So the most dangerous time to burn is around midday.

Air cools two degrees per 300 metres rise in altitude. This changes the humidity and fuel moisture.

Wind speed shows the same pattern, blowing hardest at midday. As you get higher, the wind speed increases.

The benefits of mulching
NMMU Saasveld lecturer Tiaan Pool made an interesting presentation on a recent study into the effects of mulching on fire behaviour.

The plots were burnt under similar weather conditions, and Tiaan measured the rate of spread of the fire, flame height, fire intensity and other variables.

Fuel loads: the mulched compartments had the least fuel load.

The fuel in the mulched compartments contained significantly more moisture than the fuel in other treatments.

Mulched compartments had the lowest flame heights when burnt, and the lowest rate of spread.

When deciding which treatment to use, foresters need to consider the cost as well as risk and environmental factors such as fuel, topography, weather and fire risk in the area.

In conclusion, Tiaan said that his trials showed that fire behaviour in mulched compartments is less intense than the other treatments, with lower flame heights and cooler burns, and recommended mulching as a preferred slash management treatment in P. patula and E. macarthurii from a fire risk point of view.

He also noted that mulching speeds up decomposition, and only 40% of the original amount of fuel remained in mulched compartments eight months after mulching.

Role of FPAs
Bobby Hoole, Fire Protection Officer for the Lions River FPA, gave a presentation on the role of FPAs and the relationship between landowners and wildfires. He emphasised the fact that in areas where there is a registered FPA, all landowners must abide by the rules of the FPA, whether they are members or not.

"If the FPA says 'no burning', it applies to both members and non-members, i.e. to all the landowners," said Bobby.

"We in the industry are good at launching the initial attack, but we need to convert that to an extended attack," said Ben.
"We need to have a better understanding of weather behaviour. We must base our readiness on local weather conditions and monitor weather changes during fire suppression activities, because it's normally weather that turns a small fire into a big fire."
He said there are major problems with the selection and training of fire crews. Fire boss training is inadequate, and there is not enough use of simulated fire training. "It's time government assisted FPAs with training," said Ben.

He said working together within FPAs is critical, as is the development of risk reduction programmes at FPA level.

"We put all our focus on putting the fire out – but we need to focus more on fuel load management."

In this regard, we need to develop strategic buffer zones at a regional level as ordinary firebreaks will not stop big fires.
Pre-suppression planning must include detailed response plans for high FDI periods, structured communication plans, and roles and responsibilities worked out to the finest detail. We need more training to equip staff to deal with disaster fires, and the capacity to turn initial attack into extended attack. 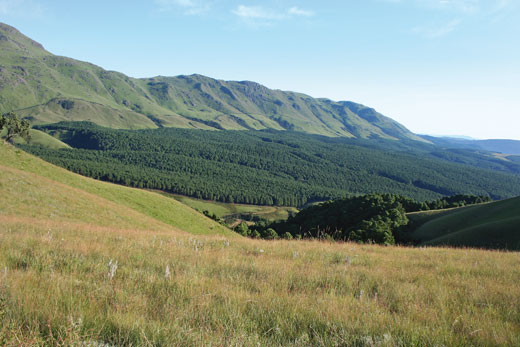 Care must be taken to mimic nature when burning grasslands like these if you want to conserve biodiversity.

Dave Everard, Sappi's Divisional Environment Manager, gave a fascinating presentation on the burning of grasslands on forestry estates. This is important because forestry has converted grassland to plantations, so the open grasslands remaining on forestry estates need to be managed carefully to conserve their biodiversity.

Dave said that fire is required in grassland landscapes; it should be preferably uncontrolled, quite frequent, and late in the season (early spring). He said that ideally, the frequency of grassland fires should vary, and they should occur at different times of the year.

This clashes with plantation managers, who want no or infrequent fires, and preferably in the early season.
Dave provided a few key pointers on how best to manage fire in grasslands:

How do we apply these principles into a plantation landscape?

In general, don't burn for a specific species ... variation in burning patterns is best for general biodiversity.

What about climate change? Fire might not be enough to keep grasslands as grasslands i.e. temperature plays a big role. Increasing temperature increases the growth of woody vegetation, so fire management will become even more important in future.