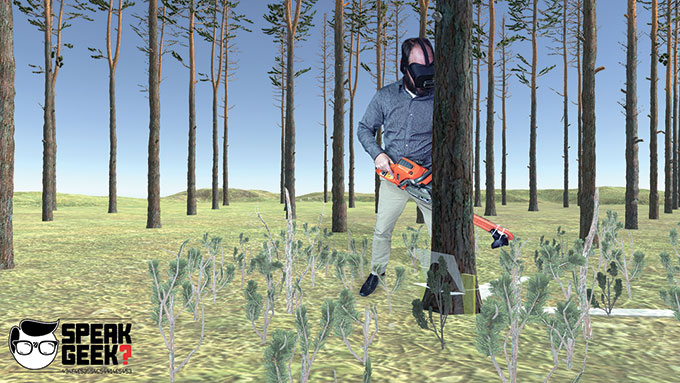 The virtual reality chainsaw training app bridges the gap between classroom and field.

FSA, in collaboration with industry partners, is busy developing a ‘virtual reality’ application that gives trainee chainsaw operators a chance to test the skills they have learnt in the classroom in a virtual forest – before going out into the real thing.

The aim of developing the app, according to Norman Dlamini of FSA who is the driving force behind the project, is to provide training service providers with a tool that will help prepare trainees for taking that big step from classroom to the field for the practical component of their training.

Norman points out that the app is not designed to replace the practical component of chainsaw operator training, but can be used to bridge the gap between classroom and field. He said that forestry owners and managers are often reluctant to allow chainsaw operator trainees into their plantations for the practical component of the course due mainly to the safety risk.

Also, he says that some training service providers are quick to get past the practical component of chainsaw operator training due to safety considerations.

Safe environment
The app provides trainees with an opportunity to practice with a chainsaw in their hands in a totally safe ‘virtual’ environment, and allows trainers to test their competency – at relatively low cost. All that is required to run the app is a dedicated computer, VR head-set, a specially adapted chainsaw with sensors and a customized, mobile gazebo.

Total cost of the hardware required to run the app is estimated at around R50 000. The programme itself will be available free to FSA members.

Norman said the app has the potential to make chainsaw operator training more accessible, while reducing the cost and improving safety.

Scarce skills
He said that whilst the total number of chainsaw operators in large commercial plantations in South Africa has drastically reduced in recent years due to mechanization, the trend in the small-scale and community forestry sub-sectors is going in the opposite direction.

Chainsaw operators are still considered a scarce and critical skill in these sub-sectors, said Norman.

The FP&M SETA provided R3 million grant funding for the Project. Husqvarna provided access to the 3D models of the chainsaw used in the application, and also donated a brand new 572XP chainsaw. The training app is based on similar concepts to the ‘Lumberjack’ VR game.

The app is being developed by a South African-based company, Speak Geek?.

World first
According to Norman, the app is the first in the world to incorporate sensors on a real chainsaw and immerse the experience into virtual reality. Out of the six project sprints – i.e. hardware assembly, home scene, felling, de-branching, cross-cutting and maintenance – the first four have been successfully completed.

The app is based on the South African Chainsaw Safety and Operating Handbook.

Current Chainsaw Operator training programmes run by service providers in the forestry industry typically range from five days to 30 days – depending on client requirements. Most of the courses comprise roughly 30% theoretical and 70% practical training.