White grubs are beneficial to soil health on the one hand, but on the other they can damage or kill tree seedlings after planting, increasing plantation re-establishment costs and reducing productivity. A research project led by Dr Benice Sivparsad of the Institute for Commercial Forestry Research (ICFR) uncovers some interesting facts about white grubs, and provides useful guidelines for effective management of white grubs to reduce crop damage.

A complex of indigenous soil pests has been shown to contribute to post-planting mortality when re-establishing black wattle (12%) and eucalypts (23%) by planting. Of these pests, white grubs are considered the most problematic because of their abundance in the soil, frequency of occurrence and the type of damage they can cause during regeneration of pine, wattle and eucalypt plantations.

‘White grub’ is the collective term given to the larval stages of chafer beetles, including the large wattle chafer, longleg chafer and wattle leaf chafer. The larvae are C-shaped, white in colour with a distinctive brown head and three pairs of well-developed legs. Larval development consists of three stages. They grow from about 1–2 mm in length (first larval stage) to 10-30 mm when mature (third larval stage), depending on species. 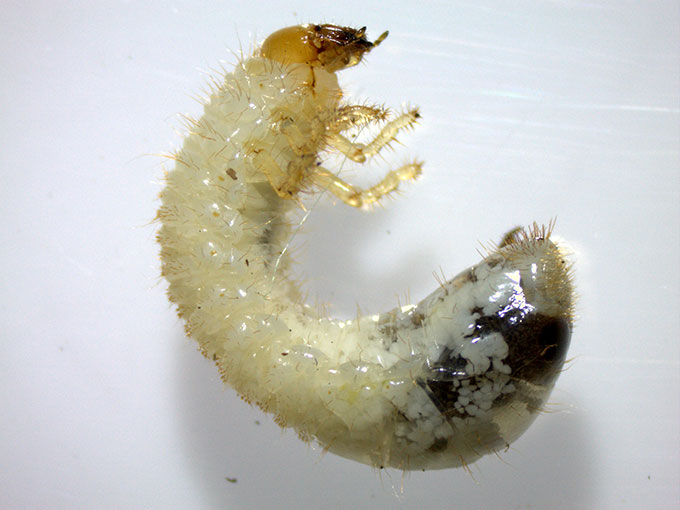 The second and third larval stages of white grubs feed on the fine roots of newly planted seedlings. In severe cases, the root plug is completely eaten away, with the under-ground portion of the stem ring-barked up to ground level. Damaged seedlings appear stressed and can be easily uprooted. Root damage can result in reduced tree growth and if severe, death of the young plants.

The larvae (white grubs) and adults (chafer beetles) include species that feed on the roots, stems, fruit or foliage of many crops, and are therefore considered sporadic forestry and agricultural pests worldwide.

In the KZN-Midlands, white grubs are known pests of forestry and sugarcane. 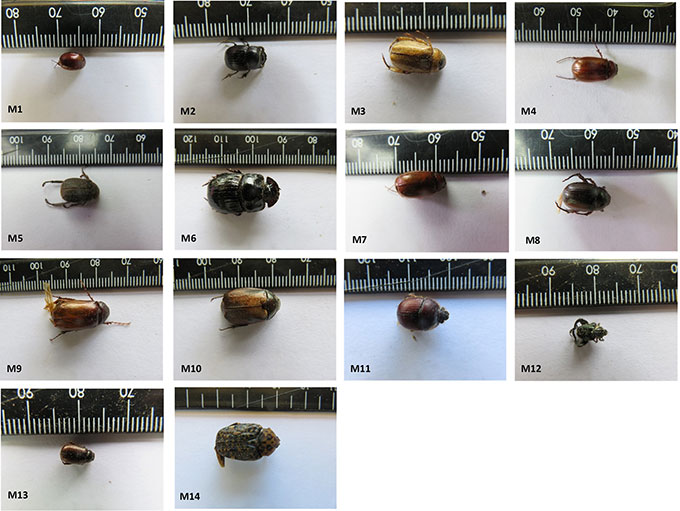 Types of white adult beetles caught in traps erected near soil monitoring sites in KwaZulu-Natal by the ICFR research team.

Forest certification requirements
At the outset of this work, the recommended insecticide for application at time of planting to control white grub damage was Deltamethrin. However, continued use of this chemical was limited by Forest Stewardship Council (FSC) requirements associated with pesticide use. The systemic neonicotinoid imidacloprid has held promise as an alternative to Deltamethrin; applied either mixed into planting water or as a slow release tablet. However, imidacloprid has been listed by the (FSC) as a restricted, highly hazardous pesticide (HHP). Any future use of HHPs in FSC certified plantations will now require the formulation of an integrated pest management framework, that considers all possible alternatives. Therefore, the need for further tests of alternative insecticides became an important research priority.

Limiting the use of insecticides for white grub control by better targeting of at-risk planting situations can also make an important contribution in meeting the FSC aim of reduced pesticide use in forestry operations. Therefore, an improved understanding of white grub incidence in plantation regeneration was also identified as a research priority.

ICFR study
For these reasons, a study was initiated at the ICFR to contribute towards a sustainable, FSC compliant strategy for the management of soil-borne pests at regeneration (under Project 303: Eucalypt forest Protection). The study focused specifically on the following objectives:
• Conduct pot trials to evaluate the effectiveness of alternative environmentally acceptable insecticides and biologicals to reduce the impact of white grubs on post-planting performance.
• Monitor the incidence of white grub in selected sites to provide temporal trends of pest activity.

This research project was made possible through funding from Mondi, Sappi, NCT and TWK. In addition to these clients, the project team included academics and scientists from various institutions including the South African Sugarcane Research Institute, Forestry and Agricultural Biotechnology Institute (FABI), Nelson Mandela University and the University of KwaZulu-Natal.

The study was initiated in 2017 with the implementation of pot trial testing and monitoring. Research activities were completed in 2019. 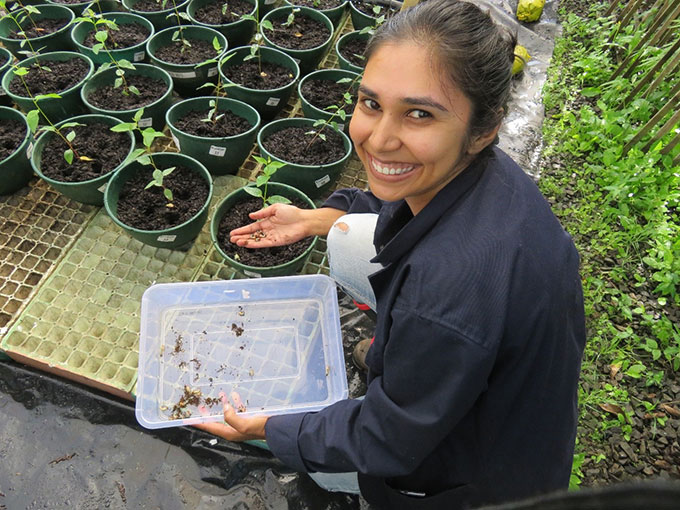 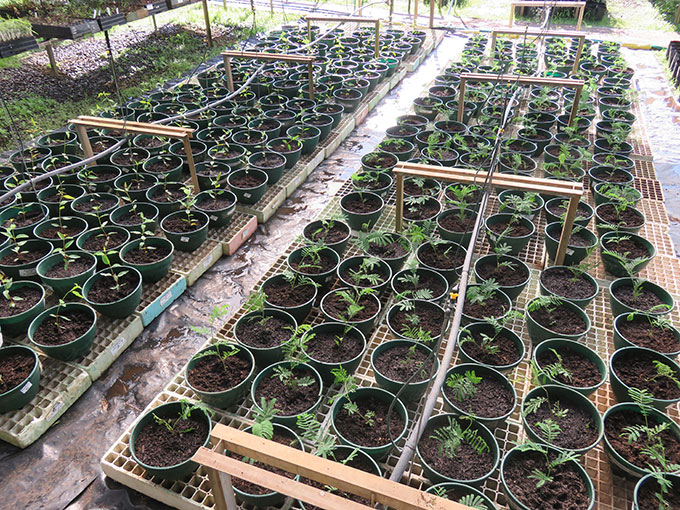 For pot trials, a controlled experiment was used to determine the effectiveness of various chemical, natural and biological control options to reduce white grub damage on Eucalyptus grandis and Acacia mearnsii seedlings. White grub were introduced to pots where seedlings were planted. A total of 14 insecticides (three biological, three natural and eight chemical) were evaluated. The study showed that currently registered products (imidacloprid tablets and liquid) worked the best out of all products tested. Clothianidin (a chemical alternative) and the experimental fungus Beauveria brongniartii strain HHWG1 (a biological alternative) showed promise in protecting seedlings from damage.

Over two years, six soil survey sites planted to pine, eucalypt and wattle and located in sugarcane and non-sugarcane areas of KZN were sampled bi-monthly for white grub larvae, pupae and adults. In addition, kairomone-baited black panel traps and light traps were erected near soil survey sites during peak flight season from November 2018 to January 2019 to determine the occurrence, relative abundance and diversity of white grub adult beetles.

Over the two year period, an average area-wide density of 0.9 white grubs per pit was recovered. Results indicated that the presence of sugarcane cultivation nearby did increase white grub abundance in wattle, pine and eucalypt. The greatest diversity and abundance of white grubs was found in the wattle site close to sugarcane. Interestingly, burning and harvesting operations reduced the abundance of white grubs, especially when sugarcane was not present in the area. 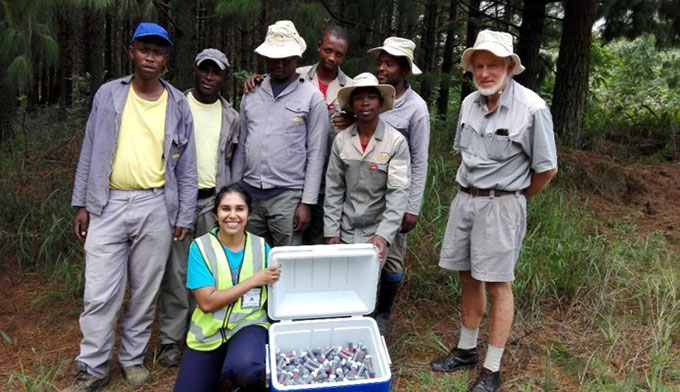 Benefits of white grubs
What many readers might not know is that not all white grub species are known pests of forestry crops. Larvae of fruit chafer and compost beetles feed on dead and decaying plant matter and are considered beneficial to the soil and the environment. In this study, fruit/flower chafers were recovered from soil surveys and adult traps located in sugarcane areas only. Their presence as a beneficial species should be noted when considering the use of insecticides.

Practical recommendations for control
1. Application of insecticides
Two insecticidal treatments containing the systemic neonicotinoid imidacloprid have been registered for use against white grubs: imidacloprid SC mixed into planting water at 0.525 g active ingredient (a.i.)/seedling at planting in 1 to 2 l and a tablet formulation placed in the planting pit directly below the roots of seedlings at planting. Results of our pot trials have indicated that these insecticides provide good control of white grubs.

2. Know the risks
Crops at highest risk: Our monitoring study confirms that planting in a site where the preceding crop was wattle carries the highest risk of white grub damage.

Site history: Sites supporting wattle and sugarcane have enhanced nitrogen and (with wattle) organic matter making them ideal environments for abundant scarab larvae. The risk of white grub damage and postplant mortality is increased when eucalypt and pine is planted in sites following wattle or sugarcane. However, the risk where the preceding crop was eucalypt or pine is considerably less.

3. Avoid planting during high risk periods
White grub related mortality coincides with seasonal adult beetle emergence, flight and oviposition that occurs prior or during planting. Hence, in the summer rainfall region, new plantings are most susceptible to white grub damage from December to April. Therefore, it is recommended, that if one or more risk factors are present, planting in the period from November to January should be avoided. Early summer (October) or late summer (early March) plantings do not coincide with peak beetle flight and should suffer less post-plant mortality due to white grub damage.

4. Modify planting practice
Introducing a fallow period prior to planting and planting into a rip line can result in up to a five-fold reduction in the incidence of soil invertebrate pests. Moreover, a rip line can result in an 18-fold decrease in white grub incidence. Ripping of the topsoil has the same effect as the cultural practice of ploughing and disking, which has traditionally been used in sugarcane farming to reduce beetle numbers. However, mechanical soil disturbance and residue burning may negatively impact long term nutrient availability, reduce soil organic carbon, increase soil erosion and machinery impact

5. Weed management
Avoiding broadcast post-emergent herbicide applications could reduce risk when planting in high risk sites. Broad spectrum herbicides create a ‘weed-free’ environment which divert feeding of resident white grub populations from weeds to young transplants. Retaining weeds that are not seriously competing with the planted seedlings, such as by a ring-hoe, may assist to mitigate high post plant mortality due to divergent white grub feeding.

These studies were intended to identify an alternative FSC compliant integrated pest management strategy for the control of white grubs in plantation forest regeneration. We believe that results from pot trial and monitoring studies provide a firm foundation for the formulation of such a strategy.

With the white grub research drawing to a close, our research focus will be concentrated on the use of exclusion plots to evaluate the impact of eucalypt canopy pests on growth and productivity.

GMT Equipment, which is distributed and supported in South Africa by AfrEquip, has introduced a new, versatile grapple saw with