Home » Photographic evidence at the scene of a wild fire

Photographic evidence at the scene of a wild fire

This photo clearly shows the origin of the fire.

Expert Witnesses are often called upon years after a fire to provide evidence in defence of a claim or court action on behalf of a client. More often than not photographs are the most reliable evidence available but they must be carefully assessed and interpreted. It is worth emphasising that the Expert Witness needs to be independent and not an advocate in the case!

There are a number of sources from which photographs can be acquired for use as evidence in the aftermath of a wild fire.

The golden rule when preparing your report is not to take the opposing expert’s evidence at face value – and to undertake your own assessment of the situation! A few examples from cases I have been involved in will help illustrate this point.

Case Study 1
In this first case the fire was extreme and did massive damage to two company plantations and many farmer and small holder properties. Conditions on the day progressed from Green in the early morning, to Orange and then Red by the afternoon.

The fire occurred in 2007 and the matter was scheduled for trial in 2014. An Expert Report was now urgently required by the Defendant! In preparing the Expert Report a site visit was arranged where the path of the fire was traced (many scars on the trees were still visible many years after the event and were useful in tracking the progress of the fire), neighbours were interviewed and pictures were obtained, primarily those taken by the spotter aircraft that monitored the fire. An account of the fire had to be developed from scratch and compared to that of the plaintiff’s expert.

Some interesting observations arose from this work. The first is that the fire did not even originate on the defendant’s farm. In addition, firebreaks that were supposed to have been in place prior to the fire were in fact not burnt, and finally the direction of one of the fires was different to the direction claimed by the plaintiff.

These conclusions could be substantiated using and correctly interpreting available photographs.

The defendant, who was not a member of the local Fire Protection Association, was not able to access all the photographic evidence available, particularly the photographs from the fire tower closest to the origin of the fire. However, in locating copies of the photographs that were being used for another purpose, two important facts were established that were to the defendant’s advantage. The first showed conclusively where and when the fire originated, and it was not on the defendant’s property! The second that was now somewhat immaterial showed that the “smoke” that supposedly indicated the direction followed by a flare-up that was reported to have caused extensive damage to neighbouring properties in fact never left the defendant’s farm. What was reported as a pillar of smoke by the plaintiff was in fact a combination of steam and smoke resulting from the water bombing of that leg of the fire. A series of photographs taken by the fire tower nearby clearly showed this fact.

A number of issues were in dispute regarding this fire and the interpretation of the photographic evidence was important in explaining events on the day. The first was the contention by the defendant that the fire originated at the base of Eskom poles on the property. However, a careful examination of the photographs of the poles showed no trace of “tracking” on the poles. “Tracking” is the process where a carbonised track on the surface of the wood will allow leakage currents to flow down to earth and potentially cause a fire.

In addition a careful observation of the photographs presented in the defendants Expert Report illustrating the burn pattern from the poles showed the fire to have moved in the opposite direction to the prevailing wind! The fire around the Eskom poles was the result of the previous day’s firebreak burning and not the origin of the fire that caused the damage.

In a further instance related to the spread of the fire the defendant claimed that the fire had been burning slowly towards the tar road and that unsuccessful attempts were made to contain the fire by back burning along an internal road. Again, spotter photographs of the burnt area on the defendant’s farm showed a clear elliptical pattern of burn once the fire had jumped the back burn, an indication that the fire was not burning slowly but rather rapidly. In fact the estimated speed of the fire based on the pattern of the burn was 25 kms an hour. 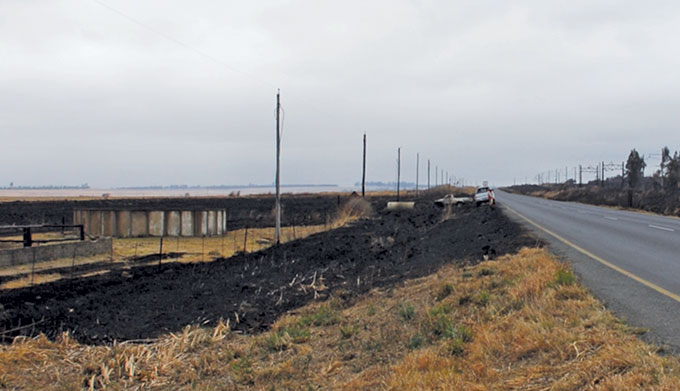 Photograph showing where the fire crossed the district road.

A further claim that could be countered by proper interpretation of the photographs was how the fire crossed the district road.

The defendant claimed that two vehicles that had been involved in an accident in the smoke from the fire had ignited a new fire on the plaintiff’s side of the road.

Unfortunately a careful interpretation of the photographs provided by a view point photographer combined with aerial photographs from the attendant spotter aircraft showed a different picture, and placed the liability squarely on the shoulders of the defendant.

The lesson learned from this case was the need to develop a holistic view of the fire and to then carefully piece together the evidence presented in the photographs in a logical and defendable manner.

Case Study 3
A fire spread from a farm onto the neighbouring company owned forest causing extensive damage to the forest. The timber farmer who also operated a sawmill on the farm, was sued for negligence in that he did not prevent the fire from spreading onto the neighbouring property. The fire was said to have originated from spontaneous combustion in one of the sawdust heaps on the defendant’s property. Pictures taken by the spotter aircraft monitoring the fire, the defendant and a neighbour were all taken into evidence.

A picture taken by the neighbour in the direction of the origin of the fire at the time when it started did not make sense when compared with the wind direction at that time. The reason for this was later revealed in court when it became evident that the picture depicted steam rising from the actions taken by the defendant’s staff in their attempts to contain the fire.

Two fires were alleged to have exited the defendant’s property on that day, entering the plaintiff’s forest in different places. The direction taken by the first fire was clear and there was no disputing where it jumped the firebreak into the plaintiff’s property.

The second fire, however, was another matter altogether. A careful assessment of photographs supplied by the neighbour and matching the background in the pictures with the topography made it possible to approximate the positions from whence the photographs were taken. Once this had been done the interpretation of the evidence provided a very different account of the fire. In fact it became clear that the second fire that had entered the plaintiff’s forest was in fact the result of attempts by people attending the fire to put in a backburn to stop the fire advancing through a compartment of gum trees. Infield evidence of scorch marks on remaining trees in the compartment some years later confirmed this assessment.

This trial that had dragged on for years was successfully concluded in favour of the defendant and the photographs used in the trial provided vital clues to what transpired on the day in question.

Our legal system takes time to run its course. Sometimes outliving key role players, memories fade and it is most important to ensure that the evidence remains intact. Photographs are an important element in this continuity. Don’t be afraid to take as many photos as possible and if you have the equipment, ensure that time date and GPS positioning is recorded.