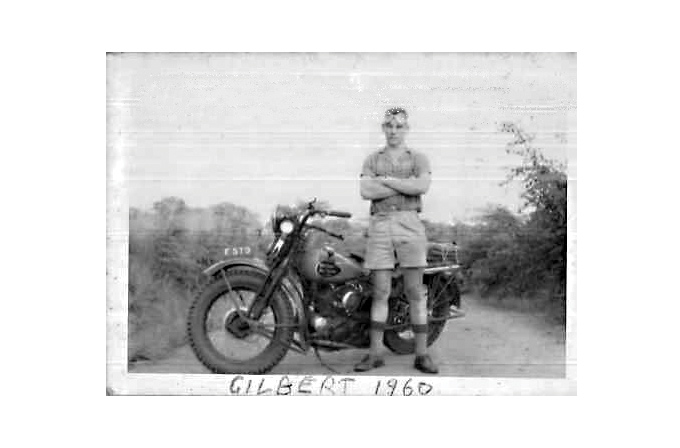 If REMINISCENCE is a sign of old age, there must be a lot of old codgers in the forestry industry. Reminiscence takes you back to times when you had fun, or overcame the hard bits in life. It's the spark that ignites the atmosphere of an experience, and a time in your life. It's therapeutic.

To find your way from Seven Oaks to Melmoth today is a simple matter of pressing some buttons on the GPS, or finding it on the Internet. In 1963, these were still in the realms of science fiction, so when my first day with NTE approached, the locals had to do for directions. A few questions reassured me that I would “be in Melmoth by lunch, old chap”, in which case there was no rush to get going. Once the July sun had disposed of the early morning frost, the 1937 Harley was on the road for what I thought was going to be a relaxed ride.

Getting to Durban was relatively easy. My brother-in-law guided me through the maze of Durban's streets onto the narrow, bumpy old North Coast road, with its cane farms with French names. My information indicated that Melmoth was about 50 kays from Durban. I was about to discover that the locals at Seven Oaks had a rather hazy knowledge of the geography of this province.

At Verulam, the cheerful petrol attendant informed me that Melmoth was “a long way from here, other side of Eshowe”. Eshowe was about 130 kms away; it was now coming on for mid-day; the Harley, veteran of many thousands of miles on the roads of Africa, needed to be ridden gently. My relaxed ride was about to turn into an epic. A map, available free of charge from Caltex garages at the time, confirmed it.

Dusk was falling when I rode into Eshowe. Refuel the Harley, buy a slab of chocolate to refuel the rider, and onto the rough dirt road into the Nkwalini valley, Melmoth still over 60 kays away. The long straight through the valley ended with the Nkwalini Pass. In those days, this Pass had a reputation as a highly dangerous bit of road, steep, narrow, with hairpin bends and terrifying drops, no barrier rails, and one corner where the road had been split by a short section of double carriageway to make it negotiable. Up this I thundered, one hand at times shielding my eyes against the glare in the sky from the setting sun, footrests scraping the tar as the corners caught me unawares before the yellow glow of the old bike’s headlight could pick them out.

NTE’s Golden Reef Estate is the first place you see when you get to Melmoth. Night had fallen, but I had made it, or so I thought … I was given directions on how to carry on to Duikerhoek Estate, 25 kays on. About halfway, a fork in the road reminded me that I hadn’t paid complete attention to the directions. It started to rain. Now what? A cold night huddled at the side of the road in the rain was becoming a possibility. Two young Zulus appeared out of the dark, and in my best Zulu, (about five words, I think) hopefully assisted by some Swahili, I asked which fork to take. They listened for a few moments, and replied in perfect English! Lightning began to flash, and the rain intensified into great wind-driven sheets. The road was becoming a stream as I set off again. Some way on, the rhythmic flashing of a car's hazard lights told me the trip was about to end. The late Noel Groom had been told to expect me, and, typical of the gentleman he was, had waited at the turn-off.

24 years later
The rain that baptised my entry into forestry lasted for four full days, giving us a very unseasonal 300 mm! I spent those four days with a book and my pipe in the comfortable rondavel that NTE estates kept for bachelors who worked with the Estate forester.

When the sun came out, the first job I did in forestry was to plant a small patch of Eucalyptus citrodora, intended for Eucalyptus oil, for the Research department. We didn't really know how this should be done, and my abiding memory of it is the little jig performed on the planting pit to tamp the soil down.

Not recommended in later years!

The story ends back in Zululand 24 years later, almost to the day. Sitting in the Babanango Hotel pub on my first day with Hunt Leuchars, one of the NTE chaps mentioned that they were felling a very old stand of Eucalyptus citrodora …

Much more than trees

South Africa is home to 1.2 million hectares of sustainably managed commercial timber plantations which provide the raw material for

If REMINISCENCE is a sign of old age, there must be a lot of old codgers in the forestry industry.

The recently upgraded Tsitsikamma Mountain Trail, which has achieved Green Flag Status, provides hikers with a unique and challenging five-day

The spectacular MTO forests are fast becoming a renowned mountain biking destination, with 7300 km of forest roads and 250

One of the many added benefits of commercial forests is the opportunity to use them for recreational activities... from biking