If ever there was an advertisement for what an ideal sawmill should look like, it would be Spitzkop. Planned and laid out immaculately by general manager and maintenance engineer, Piet Coetser, in two separate plants, Spitzkop is the perfect illustration of how sawmilling should be approached. 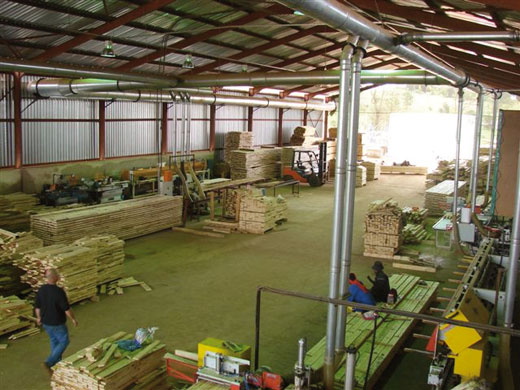 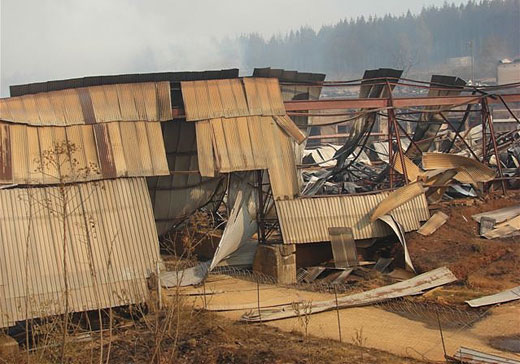 The mill was destroyed by fire two years ago.

Of the two sections, the first, a dry mill finger-jointing plant, is two years old, while the second, the wet mill, is just a year old. Jason Yeoman, from White River, the local representative for Gearing Moss, who set up the wet mill, provides some background on the installation.

"When Spitzkop came to us with their plan, we recommended Wood-Mizer machines for the optimum balance between cost, maintenance and productivity. We then supplied the entire new Small Log Processing (SLP) line, which strikes a nice balance between affordability and availability.

"The turn-around time from order to supply was short and, of course, there's the additional benefit of having service back-up in the area, if required, which supports the choice of machine line. There's no other company in the area that can offer the same service and there isn't another company in the country doing narrow band machines on the same scale.

"Spitzkop is the showpiece wet mill in the country, as far as we're concerned," he adds meaningfully.

Moving with the times
Spitzkop owner and director, Servaas Nieuwoudt, a graduate of Saasveld and a man for whom sawmilling is a way of life, endorses what Jason says.

"We've invested in the SLP line with an eye on the future, even though you can't put a five-year plan together in this industry, because we don't operate within that sort of certainty," he says. "You have to think on your feet and move with the times, which isn't really how a business should be run. We're busy," he remarks, with just a hint of pride, "and the new SLP line will push up our output quite considerably."

"We're only cutting 1 000 cubes a month," Piet Coetser chips in, "because of the market – and the way it is. In fact, we can still afford to stop. The SLP line is made up of single and twin vertical saws, a double log edger and a board edger. Gearing Moss also supplied all the log, or materials, handling equipment, as well as four Re-saws," he adds.

"With throughput of 1 000 cubes a month, we're generating an output of 600 cubes, and we're not pushing it at all," he continues. "It's important to maximise your recovery, or you can close your doors. There's still a lot of scope for improvement, though. With a chipper and debarker, we could double sawblade life and push our figures up even higher."

Jason then interprets the figures from the Gearing Moss perspective.

"When Piet tells you that the mill is processing 1 000 m³ of pine a month, what he is not telling you is that this is at a conservative recovery rate of 63%, which Spitzkop can maintain (or improve on) with their Wood-Mizer machines and equipment."

Best practices
It is clear that Spitzkop's success can be attributed to specific examples of best practice. To begin with, the blades are changed three times each day, allowing for a cutting time of about two hours per blade, before sharpening. The machines are cleaned each day and checked for any problems, as part of daily maintenance. Additionally, Piet personally inspects the machines each day. He is also responsible for staff training, in terms of operating and caring for the machinery.

Over and above this, Jason himself carries out fortnightly inspections of the line and provides ongoing staff training, to ensure that the line is working to optimum standards.

Blades are sharpened on a Wood-Mizer sharpener, which uses CBN diamond wheel technology. Basically, the diamond wheel is the exact shape of the profile of the blade, so the blade maintains the same profile, i.e. tooth height and gullet depth, throughout its lifespan. The diamond wheel grinds off 0,2 mm (per polish), which increases the number of times a blade can be sharpened considerably.

Jason's last point is that the blades are set manually, using a Wood-Mizer setter, which is 100% precise and alleviates 'wavy cuts', thereby producing the highest quality boards.

Risen from the ashes
Looking at what Spitzkop has accomplished, it's hard to believe that the entire mill was effectively burnt to the ground just two years ago. However, the mill has been in the family since 1960, so there is a long history of sawmilling. These are not people who take setbacks lying down.

"Although we were still waiting for the insurance to settle our claim, we decided to go ahead and put in the SLP line," Servaas confirms. "We went to Gearing Moss, because they supplied the finger joint cutters in our dry mill. We then decided to go with Wood-Mizer, because it represented a relatively low start-up cost investment and because we're confident about the future. That's the way we approach it, even if we don't know what the future holds.

"I can now confirm that the insurance has finally settled our claim after years of wrangling, but they paid out much less than we were due," Servaas says. "We had plans to put in a stripper and debarker – and possibly even replace the old furnace – but we've had to rethink. Still, we're not dependent on insurance companies for our livelihood.

"As Piet said, we can double what we're doing in our wet mill, but we're bound by the market. Sixteen sawmills around the country have closed down since 2007, but we're here to stay," he says adamantly, confirming his unwavering commitment to the industry.

"We look after our people here," Servaas continues, pointing to the neat lines of housing which the mill provides for its workforce, symmetrically laid out on the hill opposite the sawmill. "We may be small, but we're on the floor the whole time, which makes a hell of a difference."