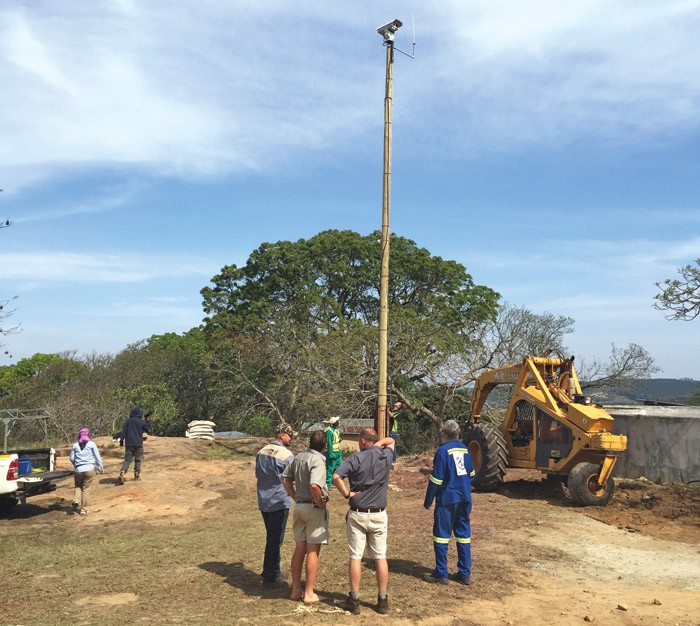 The system was installed at an Imvelo testing site in mid-September, and during the first couple of months the system will be trained to its environment. The initial trial period of six months will be extended should it be necessary.

Vaughan agreed to participate in the trial to enable him to evaluate the technology and compare it to existing smoke detection systems. This could not only benefit Imvelo Forests, but also the whole industry, he said.

Insight Robotics’ goal was to come up with a fire detection system that would empower fire services with precise real-time data and make a meaningful difference to the speed and accuracy with which a fire could be detected. The company, which already operates an extensive network of fire detection systems across Asia claims that the system can observe a single tree (2m x 1m) catching fire within a 5km radius and pinpoint its location.

Larger fires can be detected at greater distances as the system has detected several trees on fire up to 13km away. This is achieved through advanced thermal (heat) imaging cameras that identify the heat from a fire. This data is combined with computer intelligence, which allows the system to analyse the scanned data it gathered, and – unlike an ordinary camera – automatically detect fires without human involvement because it understands what it is looking at. This is all achieved through Insight Robotics' advanced software, which they continuously develop and upgrade.

This does not mean that the system can distinguish whether a fire was prescribed or not, but it ensures an alarm is triggered, alerting forest services to the danger.

Being a robot, the system does not get tired or distracted, freeing up staff to do what they are good at, such as making decisions on how to respond to a fire.

The system allows for the detection of a fire much sooner than other solutions, because its thermal sensor does not rely on a fire growing large enough to generate a visible smoke plume. Catching fires early reduces the potential damage that they can do. It also means less money spent on expensive suppression efforts that put firefighters’ lives on the line.

One of the major advantages of thermal imaging technology is its ability to detect fires when they are still very small, in any weather conditions or even at night.

The initial set-up cost for thermal imaging may be higher than the conventional smoke detection system but the set-up cost must be weighed against the reduced wildfire risk. A notable disadvantage of thermal detection is the line-of-sight requirement, which can be difficult to achieve in mountainous terrains.

Vaughan is hopeful that this new technology will prove successful, and that it can either offer a new solution to the industry or have the potential to be integrated with the current smoke detection solutions to make the entire system fail proof.