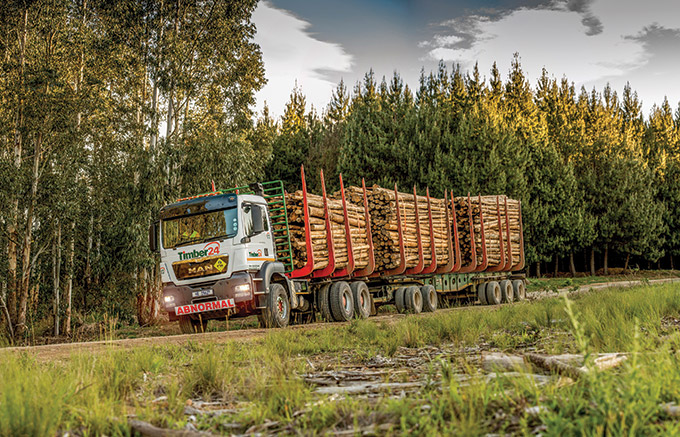 Another PBS truck on its way to the mill. This 4th generation design is capable of moving a 47 ton payload, saving time, money, wear and tear on the roads and improving safety.

They’re smart, they’re big, and they are saving the forestry industry a packet. They’re also reducing wear and tear on the country’s roads and making them safer for all. We’re talking about PBS vehicles – also known as ‘Smart Trucks’ – those behemoths bearing an ‘abnormal load’ sign on the back travelling the highways and byways of KZN, Eastern Cape and Mpumalanga between forest and mill, loaded to the hilt with timber.

The use of Smart Trucks in the timber industry has saved nearly 25 million kms, 9.6 million litres of fuel and 252 751 tons of CO2 emissions, since inception of the PBS Pilot Project in 2007.

The bigger payloads that these trucks can carry has reduced the number of trips required to move timber from depot to market in 2018 alone by 11 385 trips.

This has had a huge impact on the road infrastructure as Smart Trucks cause less road damage per ton of payload.

Fewer trucks on the roads, plus the improved design and performance of Smart Trucks has also had a big impact on safety, with Smart Trucks experiencing roughly half the number of crashes compared to conventional heavy trucks (per million kms travelled).

These stats have been compiled by the CSIR which has been closely monitoring the performance of Smart Trucks since the programme was launched in collaboration with the Department of Transport back in 2007.

The fact that these trucks are more carefully regulated, are operated by top level transport companies and must have the most experienced drivers at the wheel in terms of their permits, has played a significant role in their overall performance.

The timber industry has played a pioneering role in the PBS programme, being the first industry to introduce Smart Trucks to South Africa. Subsequent innovation by industry stakeholders and timber transporters has seen significant improvement in truck and trailer designs and configurations. The latest Smart Truck innovations are capable of carrying up to 55 ton payloads and more vs 36-38 ton payloads on conventional heavy duty trucks.

The total number of smart trucks on SA’s roads has increased from two timber trucks back in 2007 to around 270 today, transporting a range of freight types including timber, paper reels, sugar, beer, aluminium ingots, chrome and platinum ore, fuel, cattle and shipping containers.

In 2018 there were a total of 92 smart trucks operating just in the timber industry, evenly spread between KwaZulu-Natal and Mpumalanga. Operators include Buhle Betfu, Date Farms, Timber Logistics, Timber 24, Tekwani and SG Timbers.

The PBS Pilot Project was based on a similar programme launched in Australia to improve logistics efficiencies. The pre-cursor in South Africa was the Road Traffic Management System (RTMS) which was introduced to reduce the incidence of truck overloading which was rife on SA’s roads. RTMS is based on self-regulation by transport operators who voluntarily joined the programme taking responsibility for the correct loading of their trucks. RTMS accreditation is a prerequisite for any transporter applying for a PBS permit.

Conventional heavy vehicles used on our roads are controlled by prescriptive regulations in terms of vehicle mass and structural dimensions – a one-size fits all approach.

The PBS concept turns this on its head by introducing a performance-based approach where the vehicles must meet a stringent set of performance standards relating to maneuverability, stability and road impact, while prescriptive limits on mass and vehicle dimensions are relaxed.

This has opened the door to new design and innovation that has seen payloads increase while vehicle performance and safety has improved. PBS permits issued by the transport authorities are restricted to set routes where roads are suitable.

The PBS trucks are designed using sophisticated computer software which makes use of simulations to test and improve the vehicle’s response to a variety of on-road situations. These innovations have seen trailer lengths decreasing even as payloads have increased, improving maneuverability and stability while allowing the vehicles to get closer to the stump.

So what does the future hold for the PBS vehicles?

According to FSA’s Francois Oberholzer, the PBS pilot programme has been extended to enable CSIR to gather more relevant data on the performance of Smart Trucks in a broader range of industries and regions.

Once the transport authorities are satisfied – based on the information gathered by CSIR – that the Smart Trucks are indeed bringing the claimed benefits to infrastructure, health and safety and the environment while improving efficiencies, then a process of mainstreaming the adoption of Smart Trucks will likely commence.

This will involve addressing complex technical and legislative issues which will take a number of years to work through. Ultimately it seems that Smart Trucks will continue to play a specific role in the freight transport network, integrating with conventional heavy trucks and rail.